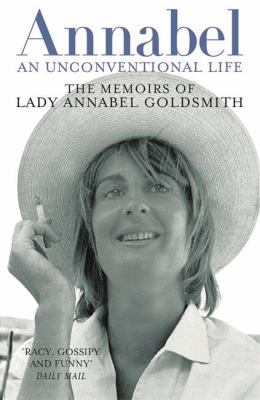 Lady Annabel Goldsmith is a daughter of the 8th Marquess of Londonderry. In these memoirs she tells of her aristocratic upbringing with an increasingly eccentric father, a Conservative MP with strong liberal leanings, and a mother who died young from cancer.

Married to Mark Birley at the tender age of 20, she was the name behind the creation of his club, Annabel's, in Berkeley Square. As a result of his serial affairs their marriage did not last, but by then Annabel had entered into a relationship with James Goldsmith. Annabel eventually married Goldsmith and had three children, including Jemima Khan and Ben, who is marrying into the Rothschild family. But tragedy was never far away: Rupert, her eldest son, died in an accident and Goldsmith died from cancer after financing the Referendum Party in the 1997 general election.

This is the story of someone right at the heart of British society, but it is told with immense wit and warmth touching on subjects that are universal.

The daughter of the eighth Marquess of Londonderry chronicles her aristocratic life in a low-key, chatty memoir chock-full of famous names. Born in 1934, Annabel grew up in resplendent wealth amid various grand country houses in Scotland and Ireland. Her grandmother was a great political hostess, linked to the royal family, and at the Queen's coronation in 1953 her older sister was one of the six chosen maids of honor. Annabel's "coming out" was overshadowed by the ghastly death from mouth cancer of her adored mother, a commoner who had married her father for love. At age 19, Annabel quietly married Mark Birley, a member of her set and son of portrait painter Oswald Birley. A gambler and business mind, Mark started up several notable London society night spots, including Harry's Bar and Annabel's, one of the swinging '60s most famous clubs, located in the basement of 44 Berkeley Square. There, the flesh-and-blood Annabel met French-English businessman Jimmy Goldsmith, who marketed pharmaceutical products, was friendly with Margaret Thatcher, and forged the reactionary Referendum Party. Jimmy had a family in France and a mistress in New York, but that didn't impede him and Annabel from marrying and having three children together. ("If you marry your mistress," Goldsmith once wisecracked, "you create a vacancy.") Although Jimmy often lived elsewhere, leaving Annabel and the children at their Ormeley house near Richmond Park, they vacationed together in exotic spots, an arrangement that seems to have suited his pampered and undemanding wife. Her memoir is full of dogs and children, specific about names and places--Princess Diana was a friend, so were Claus and Sunny von BÜlow; Armand Hammer once made a pass at her--but emotionally spotty. A thin slice of the upper-upper-crust. Copyright ©Kirkus Reviews, used with permission.
More book reviews at iDreamBooks.com