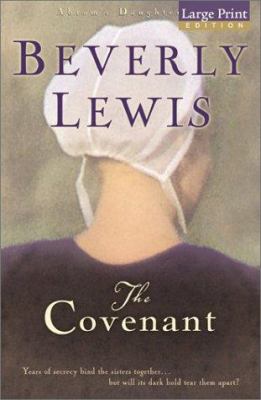 Genre/Form: Christian fiction. | Domestic fiction.DDC classification: 813/.54 Subject: The Amish community of Gobbler's Knob holds everything Leah has ever desired until a pact with her older sister, lured by the outside world, leaves her clinging to God's promises
List(s) this item appears in: Christian Fiction
Tags from this library: No tags from this library for this title. Log in to add tags.
Fiction notes: Click to open in new window

Drawn into an incomprehensible pact with her older sister, Leah finds her dreams spinning out of control, even as she clings desperately to the promises of God. "The Covenant" begins a powerful Lancaster portrait of the power of family and the miracle of hope.

The Amish community of Gobbler's Knob holds everything Leah has ever desired until a pact with her older sister, lured by the outside world, leaves her clinging to God's promises

Fans of Lewis's "Heritage of Lancaster County" trilogy will cheer her return to Amish country with this new series. When the teenage daughters of Abram Ebersol begin courting during the summer of 1946, Sadie furtively sees smooth-talking, nonAmish Derry, who impregnates and then abandons her. After keeping her pregnancy hidden from all but her younger sister Leah and Aunt Lizzie, Sadie goes into premature labor, and Derry's father is the doctor called in to help. At the same time, Leah defies her father, who has chosen her future husband, by becoming engaged to Jonas Mast. Meanwhile, younger twin sisters Hannah and Mary Ruth struggle with their own hopes and fears for the future, and a fifth daughter is born to mother Ida. Unfortunately, Lewis's scattershot approach focuses too briefly on too many characters, making it hard for the reader to keep them straight. It's also difficult to be sympathetic to a family who weaves its own web of deception, but Lewis is a master of eliciting empathy for characters caught in troubles of their own making. The Amish community with all of its intricacies is vibrantly drawn (Lewis grew up in Pennsylvania Dutch country), and the tension between it and the encroaching English world is palpable. "Jahe" readers will be impatient for the continuation, even if it won't be "perty." Recommended for all collections. (c) Copyright 2010. Library Journals LLC, a wholly owned subsidiary of Media Source, Inc. No redistribution permitted.

Inspirational novelist Lewis begins Abram's Daughters, a Lancaster County series about four Amish sisters, in the tradition of her previous novels. It should please her fans, while not offering much in the way of fresh material. It's 1946 in Gobbler's Knob, Pa., and Sadie Ebersol and her sister, Leah, are exploring the joys of "rumschpringe" the period of relaxed rules and running around that Amish teens enjoy prior to their baptism into the church. Tomboy Leah's first love is Jonas Mast, but her father Abram has determined she'll marry Gideon Peachey, whose father's farm adjoins the Ebersols'. Her beautiful sister Sadie's defiance crosses the boundaries when she becomes involved with Englischer Derek Schwartz. Heartache is inevitable. The dialect (perty, redd, Dat, ach, wonderful-gut, jah) is as dense as sugar cream pie, as are the italicized terms. There are further challenges for the reader: multiple points of view and cumbersome Amish definitions make the novel a bumpy read for the uninitiated. The characters are flat and unchanging, and the plot functions mostly as a setup for the series. There are factual errors, as when Ebersol's home garden produce stand features early spring vegetables in the month of August. Several events, including a hidden pregnancy that remains unobserved by the family until almost the eighth month, require enormous suspension of disbelief, and readers will see the key plot developments coming from the earliest pages. However, none of these troubles may deter Lewis's enthusiastic audience. (Sept.) Forecast: With nearly three million novels sold, Lewis is a staple on the CBA bestseller charts. Bethany plans a major marketing push for the new series. (c) Copyright PWxyz, LLC. All rights reserved

Heitzmann's Twilight brings two old lovers together in their hometown, little Montrose, Missouri. Cal Morrison, a nice fellow with small horizons, never left, settling on the job of fireman; Laurie Sutton, on the other hand, couldn't wait to leave and married a senator's son who was trying to become a big-league ballplayer. Now, she's back, divorced, and with two kids in tow; the question is whether she's ready to settle down. The answer isn't long in coming, though both Cal and Laurie ring true as small-town types with their careful, rather sad lives. John Mort Copyright © American Library Association. All rights reserved
More book reviews at iDreamBooks.com