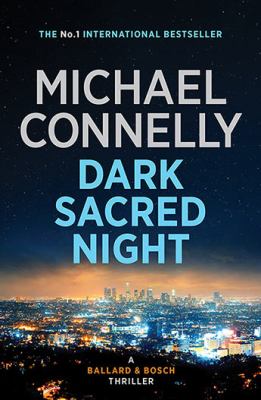 Genre/Form: Detective and mystery fiction.DDC classification: 813/.6 Summary: Teaming up with Harry Bosch to reopen a cold case, LAPD detective Renée Ballard navigates interpersonal differences to pursue justice for a murdered runaway in Hollywood. Renée Ballard returns to Hollywood Station from working the night beat. She finds a stranger rifling through old file cabinets-- retired detective Harry Bosch, working a cold case that has gotten under his skin. Ballard kicks him out, but then checks into the case herself. Bosch is investigating the death of fifteen-year-old Daisy Clayton, a runaway on the streets of Hollywood who was brutally murdered and her body left in a dumpster like so much trash. Now, Ballard joins forces with Bosch to find out what happened to Daisy and finally bring her killer to justice. -- adapted from jacket.
Tags from this library: No tags from this library for this title. Log in to add tags.
Fiction notes: Click to open in new window

Teaming up with Harry Bosch to reopen a cold case, LAPD detective Renée Ballard navigates interpersonal differences to pursue justice for a murdered runaway in Hollywood. Renée Ballard returns to Hollywood Station from working the night beat. She finds a stranger rifling through old file cabinets-- retired detective Harry Bosch, working a cold case that has gotten under his skin. Ballard kicks him out, but then checks into the case herself. Bosch is investigating the death of fifteen-year-old Daisy Clayton, a runaway on the streets of Hollywood who was brutally murdered and her body left in a dumpster like so much trash. Now, Ballard joins forces with Bosch to find out what happened to Daisy and finally bring her killer to justice. -- adapted from jacket.

Night shift detective Renée Ballard (The Late Show) of the LAPD Hollywood Division returns from a scene early one morning to find a stranger rummaging through an office file cabinet. She soon learns that the man is retired detective Harry Bosch, and he's looking into the cold case murder of a teenage girl. After reading up on the case, Ballard approaches Bosch and offers to help. She learns that the dead girl was the daughter of a woman living in Bosch's house-a woman he met while working undercover as a pill shill (Two Kinds of Truths). Digging through field interview cards from nearly a decade before, the detectives uncover a lead. At the same time, Ballard is working a homicide and Bosch is looking into a gang killing for the San Fernando Police Department. Despite a structural formula of parallel story lines similar to other recent Bosch entries, the partnership between the detectives makes it feel fresh. Bosch's reckless instincts are tempered by Ballard's by-the-books attitude. VERDICT Mystery-suspense readers will not only enjoy this quick read but will look forward to the duo's continuing partnership. [See Prepub Alert, 4/23/18.]-Vicki Briner, Broomfield, CO © Copyright 2018. Library Journals LLC, a wholly owned subsidiary of Media Source, Inc. No redistribution permitted.

LAPD Det. RenAce Ballard, first seen in 2017's The Late Show, makes a welcome return in this outstanding, complex police procedural. Relegated to the night shift at the Hollywood Station following a sexual harassment suit against her former lieutenant, Ballard works her cases with a quiet focus and intensity. Late one night, Ballard surprises a man looking through some old case files. It turns out to be retired LAPD detective Harry Bosch, now working cold cases for the San Fernando PD. After Bosch leaves, Ballard takes a look at the file, detailing the unsolved 2009 murder of Daisy Clayton, a 15-year-old runaway. The slain girl was the daughter of a recovering addict, who has been taken in by Bosch. Ballard is hooked, and begins working the case with Bosch. Meanwhile, Bosch's investigation into another cold case, the execution-style killing of a 52-year-old gang leader, has put the detective squarely in the sights of Varrio San Fer 13, one of the valley's most violent gangs. Bosch and Ballard, both outsiders with complicated pasts, form a perfect partnership in this high spot of Edgar-winner Connelly's long and distinguished career. Agent: Philip Spitzer, Philip G. Spitzer Literary. (Oct.) c Copyright PWxyz, LLC. All rights reserved.

*Starred Review* Of the myriad things Connelly does superbly as a crime writer, perhaps one of the least heralded is his ability to bring characters together from different series. Many writers have attempted this gambit, but too often it winds up feeling artificial, like a mere guest-star turn. Not so with Connelly, who first brought then-LAPD detective Harry Bosch together with lawyer Mickey Haller, adding backstory and depth to both characters, and who now introduces Harry to Renée Ballard, from The Late Show (2017). Bosch is retired from the LAPD now and working cold cases for the San Fernando PD, while Ballard continues to toil on the night shift. They meet when Harry is discovered by Renée doing some surreptitious snooping in department files. Harry can't stay away from an extremely cold case involving the rape and murder of a teenage prostitute in Hollywood; Renée, intrigued by the case and with her own reasons for pursuing abusers and killers of women, teams up with Harry off the books. Meanwhile, both cops have cases on their front burners that could play havoc with their lives and careers. Connelly does what he has always done over 31 previous novels, from taking extreme care with procedural detail, showing cops digging for facts wherever they can be found, through getting inside his characters' heads and revealing a nest of ambiguity as well as dark sides ever eager to express themselves. So it happens here, as Bosch, attempting to follow his personal creed ""Everybody counts or nobody counts"" wanders into some very deep water. HIGH-DEMAND BACKSTORY: A guaranteed chart-topper again for Connelly, as the success of the Amazon Prime series Bosch heads into production for its fifth season, creating more synergy for the books, which continue as strong as ever.--Bill Ott Copyright 2018 Booklist

Harry Bosch, who just can't stay retired, unwillingly teams up with a Hollywood detective who has reasons of her own for wanting in on his latest cold case.It may be nine years since 15-year-old runaway Daisy Clayton was grabbed from the streets of Los Angeles and killed, but the daily presence of her mother, Elizabeth, in Harry's lifeshe's staying at his place while he helps her stay cleanmakes it a foregone conclusion that he'll reopen the case. On the night Bosch drops into Hollywood Division to sneak a look at some of the old files, he's caught by Detective Rene Ballard, who was bounced from LAPD Robbery/Homicide to "the late show," Hollywood's third shift, after her complaint about aggressive harassment by a superior went nowhere. Bosch needs to find out who was responsible for what happened to Daisy; Ballard needs to work a case with teeth, even if she's partnering with a reserve investigator in the San Fernando Police Department (Two Kinds of Truth, 2017, etc.) who'd rather work alone. Before they get what they need, they'll have to wade through a double caseload as grueling and sometimes as maddeningly routine as you can imagine, from an apparent murder that turns out to be a slip-and-fall to an ancient gang killing whose repercussions flare to sudden life to the theft of some valuable Andy Warhol prints to a missing man who's not just missingnot to mention Elizabeth's sudden disappearance and Ballard's continuing lack of support, and sometimes even backup, from her department. Not even the canniest readers are likely to see which of these byways will end up leading to the long-overdue solution to the riddle of Daisy Clayton's death.Fans who don't think the supporting cases run away with the story will marvel at Connelly's remarkable ability to keep them all not only suitably mystifying, but deeply humane, as if he were the Ross Macdonald of the police procedural. Copyright Kirkus Reviews, used with permission.
More book reviews at iDreamBooks.com