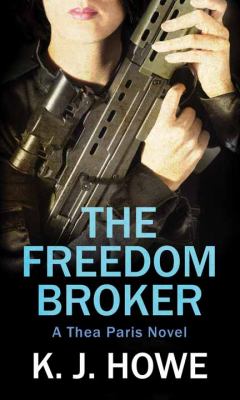 Genre/Form: Thrillers (Fiction)DDC classification: 813/.6 Summary: Kidnap-and-rescue negotiator Thea Paris' worst nightmare comes true when her father is kidnapped and the only way to rescue him may involve an unthinkable sacrifice.
Tags from this library: No tags from this library for this title. Log in to add tags.
Fiction notes: Click to open in new window

There are twenty-five elite kidnap and ransom (K & R) specialists in the world. Only one is a woman: Thea Paris. And she's the best in the business.Twenty years ago, a terrified young boy was abducted in the middle of the night by masked intruders while his sister watched, paralyzed with fear. Returned after a harrowing nine months with his captors, Thea's brother has never been the same.

Kidnap-and-rescue negotiator Thea Paris' worst nightmare comes true when her father is kidnapped and the only way to rescue him may involve an unthinkable sacrifice.

*Starred Review* The crime of kidnapping unites a family. Nikos Paris was kidnapped when he was 12 years old, as his shocked younger sister, Thea, looked on; then the boy was held captive for nine months, an experience that irrevocably changed him. Thea has become a fearless response consultant for Quantum International Security, specializing in kidnap prevention, negotiation, and hostage extraction, and she hides her diabetes to avoid being judged weak. Then Thea and Nikos' father, oil magnate Christos, is kidnapped from his yacht in Greece just before his sixtieth-birthday celebration and as negotiations for a contract on an oil-rich area in Africa are about to begin. As Thea and her colleagues search for her father, Nikos' experience in captivity and dual identity are revealed, leading to a potentially fatal showdown on an elevated bridge between Zimbabwe and Zambia. Fortunately Thea has an ally from the Hostage Recovery Fusion Cell as well as Rif Asker her boss' son, father's godson, and childhood friend, who always has her back. This debut novel by Howe, executive director of the International Thriller Writers' annual ThrillerFest, generates nonstop suspense, commanding attention from the start and never letting go. Intended as the start of a series, this is a must for thriller fans.--Leber, Michele Copyright 2016 Booklist
More book reviews at iDreamBooks.com