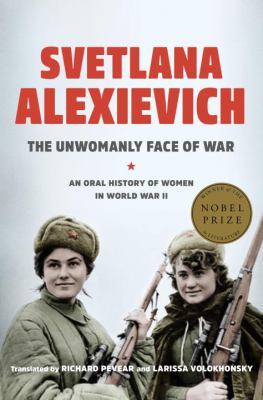 The unwomanly face of war : an oral history of women in World War II / Svetlana Alexievich ; translated by Richard Pevear and Larissa Volokhonsky.

Genre/Form: Personal narratives.DDC classification: 940.53/4709252
Contents:
From a conversation with a historian -- A human being is greater than war -- "I don't want to remember..." -- "Grow up, girls... you're still green..." -- "I alone came back to Mama..." -- "Two wars live in our house..." -- "Telephones don't shoot..." -- "They awarded us little medals..." -- "It wasn't me..." -- "I remember those eyes even now..." -- "We didn't shoot..." -- "They needed soldiers... but we also wanted to be beautiful..." -- "Young ladies! Do you know: the Commander of a Sappier Platoon lives only two months..." -- "To see him just once..." -- "About tiny potatoes..." -- "Mama, what's a papa?" -- "And she puts her hand to her heart..." -- "Suddenly we wanted desperately to live..."
Summary: "Bringing together dozens of voices in her distinctive style, War's Unwomanly Face is Svetlana Alexievich's collection of stories of women's experiences in World War II, both on the front lines, on the home front, and in occupied territories. This is a new, distinct version of the war we're so familiar with. Alexievich gives voice to women whose stories are lost in the official narratives, creating a powerful alternative history from the personal and private stories of individuals. Collectively, these women's voices provide a kaleidoscopic portrait of the human side of the war. When the Swedish Academy awarded Svetlana Alexievich the Nobel Prize in Literature, they praised her "polyphonic writings, a monument to suffering and courage in our time," and cited her for inventing "a new kind of literary genre." Sara Danius, the permanent secretary of the Swedish Academy, added that her work comprises "a history of emotions -- a history of the soul."--Provided by publisher.
Tags from this library: No tags from this library for this title. Log in to add tags.
Fiction notes: Click to open in new window

For more than three decades, Svetlana Alexievich has been the memory and conscience of the twentieth century. When the Swedish Academy awarded her the Nobel Prize, it cited her invention of "a new kind of literary genre," describing her work as "a history of emotions . . . a history of the soul."

In The Unwomanly Face of War, Alexievich chronicles the experiences of the Soviet women who fought on the front lines, on the home front, and in the occupied territories. These women--more than a million in total--were nurses and doctors, pilots, tank drivers, machine-gunners, and snipers. They battled alongside men, and yet, after the victory, their efforts and sacrifices were forgotten.

Alexievich traveled thousands of miles and visited more than a hundred towns to record these women's stories. Together, this symphony of voices reveals a different aspect of the war--the everyday details of life in combat left out of the official histories.

Translated by the renowned Richard Pevear and Larissa Volokhonsky, The Unwomanly Face of War is a powerful and poignant account of the central conflict of the twentieth century, a kaleidoscopic portrait of the human side of war.

THE WINNER OF THE NOBEL PRIZE IN LITERATURE
"for her polyphonic writings, a monument to suffering and courage in our time."

"A landmark." --Timothy Snyder, author of On Tyranny: Twenty Lessons from the Twentieth Century

"An astonishing book, harrowing and life-affirming . . . It deserves the widest possible readership." --Paula Hawkins, author of The Girl on the Train

"Alexievich has gained probably the world's deepest, most eloquent understanding of the post-Soviet condition. . . . [She] has consistently chronicled that which has been intentionally forgotten." --Masha Gessen, National Book Award-winning author of The Future Is History

"Bringing together dozens of voices in her distinctive style, War's Unwomanly Face is Svetlana Alexievich's collection of stories of women's experiences in World War II, both on the front lines, on the home front, and in occupied territories. This is a new, distinct version of the war we're so familiar with. Alexievich gives voice to women whose stories are lost in the official narratives, creating a powerful alternative history from the personal and private stories of individuals. Collectively, these women's voices provide a kaleidoscopic portrait of the human side of the war. When the Swedish Academy awarded Svetlana Alexievich the Nobel Prize in Literature, they praised her "polyphonic writings, a monument to suffering and courage in our time," and cited her for inventing "a new kind of literary genre." Sara Danius, the permanent secretary of the Swedish Academy, added that her work comprises "a history of emotions -- a history of the soul."--Provided by publisher.

Translated from the Russian.

A worldwide best seller when it was originally published in Russian in 1985, this work by Nobel Prize winner Alexievich (Secondhand Time: The Last of the Soviets) combines hundreds of oral history accounts with the author's own reflections. Alexievich conducted these interviews between 1978 and 1985, intending to capture "women's history of war." There are reminiscences from nurses, doctors, pilots, airplane mechanics, tank drivers, and countless others who served the Soviet war machine in some capacity. Other "backstage" women recount doing the laundry, cooking, baking, cleaning, tending horses, repairing machinery, and delivering the mail. Alexievich not only records the experiences of others but provides her own reactions as she listens to their accounts-notably the pain, hurt, and pride felt by all. She comments on what women wanted to remember and what they were reluctant to share; these were "good and honest" people, in the words of one interviewee, who believed in the communist idea. VERDICT An engaging and readable history for anyone interested in World War II, women's history, and personal -memoirs.-Marie M. Mullaney, Caldwell Coll., NJ © Copyright 2017. Library Journals LLC, a wholly owned subsidiary of Media Source, Inc. No redistribution permitted.

"I write not about war, but about human beings in war," explains Nobel-laureate Alexievich (Secondhand Time) in this lyrical, elegant volume. "I write not the history of war, but the history of feelings. I am a historian of the soul." Originally published in 1985 and newly translated by Pevear and Volokhonsky, the work was inspired by Alexievich's postwar childhood memories of the women in her home village and their stories of WWII. Alexievich traveled through the Soviet Union for years interviewing hundreds of other women, collecting a haunting cacophony of almost-forgotten voices. For these women, who joined the Red Army as snipers, medical personnel, riflemen, foot soldiers, etc., war wasn't about generals and military equipment. "Women's stories are different and about different things," Alexievich reveals. "There are no heroes and incredible feats, there are simply people who are busy doing inhumanly human things." Alexievich groups the interviews into chapters according to women's perceptions about their service: "I Don't Want to Remember...," "They Awarded Us Little Medals...," "They Needed Soldiers... but We Also Wanted to Be Beautiful...." Though political contexts have changed, Alexievich's first book remains as soulful as ever. (Aug.) © Copyright PWxyz, LLC. All rights reserved.

That hundreds of thousands of Soviet women served in the regular army combat forces during WW II remains a revelation to those in the West, even in the era of integrated armed forces in the 21st century. Begun in the late 1970s and first published in Russian in 1985, and published here for the first time in English, this volume presents women's recollections as part of an experience of listening to an older generation's recollections of war and the challenges of accessing and interpreting war memories as a civilian after decades. Aleksievich, a Nobel Prize-winning author, draws out recurring themes in interviews to focus on the relationships, feelings, and distinctly feminine aspects of war experience. The volume comprises 15 thematic chapters, each consisting of interviews with anywhere from one to more than a dozen women veterans and survivors of WW II. The structure and topics emphasize the value of oral history, though feelings and flaws affect the resulting narrative as a basis for re-creating an image of the past. This masterfully curated set of women's recollections will be valued by those interested in or studying Russian history, gender and women's studies, memory studies, military history, anthropology, and possibly even comparative literature. Summing Up: Highly recommended. Lower-division undergraduates through faculty; general readers. --Steven G Jug, Baylor University

Unlike other Allied powers in WWII, the Soviet Union utilized many women in combat roles. Most served away from the front on farms and in factories and hospitals, but thousands fought as partisans or with regular combat units. Nobel laureate Alexievich (Secondhand Time, 2016) created this riveting oral history in 1985, and it retains its eloquence and often-shocking power in its first English translation. Alexievich gathered these memories, emotions, and hopes shattered and fulfilled from a variety of former female soldiers. She acknowledges that she and her generation face an unbridgeable gulf between themselves and those who directly endured the daily savagery of the war. Indeed, a few of these women seethe with resentment at chroniclers who ignore their heroism. Others attempt to honestly convey their experiences, and their tales are moving and disturbing. Some recall, shamefully, the joy they felt as captured Germans were mistreated. A partisan calmly recalls the necessary drowning of her infant after giving birth. This is painful but worthwhile reading, especially as the number of living veterans of the war dwindles.--Freeman, Jay Copyright 2017 Booklist

The Nobel laureate (2015) writes about "the wrong kind of war": oral confessions from Russian women intimately involved with fighting for the motherland.In her distinctive nonfiction style, a mix of her own reflections and transcribed, edited interviews with diverse Russians who have lived through decades of hardship, Alexievich (Secondhand Time: The Last of the Soviets, 2016, etc.) focuses on women who recounted to her amazing stories of their participation in World War II. Although first published in Russia in 1985, with an English-language version published in Moscow in 1988, this version features a sprightly new translation and a restorationas the author notes in her introductory remarksof material "the censors" threw out as being unheroic or unpatriotic. As Alexievich writes, war is traditionally known through male voices, yet Russian women, fired up by the urgency to push back the invading Germans, took up the military challenge and demonstrated enormous courage and ability. However, women were often silenced after the war, since assuming traditionally male military duties was seen as unwomanlyindeed, who would marry them? Alexievich writes movingly of how these extremely strong, now-elderly women had rarely been encouraged to tell their stories, but they eventually opened up under her gentle questioning and attention. Most often very young when recruited, the women reveal how they had to beg their male officers to allow them to get to the front line; once they mastered their tasks, the men were amazed at what they could do, and the Germans were horrified to learn that many of the snipers were women. Moreover, beyond their military prowess, of which they were very proud, the women offer touching, intimate details about their servicee.g., being assigned too-large boots and clothing, the shame of having to wear men's underwear and managing their periods, finding love, and the ability to feel empathy for the starving German children after the war. Essential reading full of remarkable emotional wealth. Copyright Kirkus Reviews, used with permission.
More book reviews at iDreamBooks.com