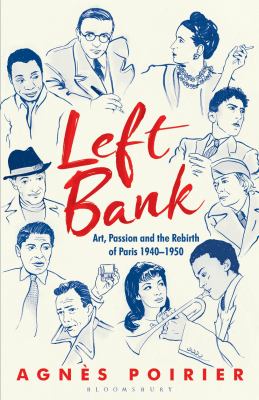 DDC classification: 944.361
Contents:
I. War was my master -- The fall -- The choice -- The fight -- The desire -- II. Modern times -- A philosophy of existence -- Lust and emancipation -- A third way -- III. The ambiguities of action -- How not to be a communist? -- Love, style, drugs, and loneliness -- Action and dissidence -- "Paris's gloom is a powerful astringent" -- IV. Sharpening the senses -- "They owned art while we were just full of dollars" -- Stimulating the nerves -- Anger, spite, and failure -- Vindicated -- Farewells and a new dawn.
Summary: A captivating portrait of those who lived, loved, fought, played and flourished in Paris between 1940 and 1950 and whose intellectual and artistic output still influences us today.
Tags from this library: No tags from this library for this title. Log in to add tags.

A captivating portrait of those who lived, loved, fought, played and flourished in Paris between 1940 and 1950 and whose intellectual and artistic output still influences us today

'The live fire of the war, the furnace of emotions, the passion of politics, the spectacular falling-outs, the brutal sex, the insane and beautiful ideas so many failures and some remarkable achievements'

After the horrors of war that shaped and informed them, Paris was the place where the world's most original voices of the time came among them Norman Mailer, Miles Davis, Simone de Beauvoir, James Baldwin, Juliette Greco, Alberto Giacometti, Saul Bellow and Arthur Koestler. Fuelled by the elation of the Liberation, they hoped to find an independent and original alternative to the Capitalist and Communist models for life, art and politics a Third Way. Those same pioneers also reinvented their relationships with others, questioning, shaking and often rejecting the institutions of marriage and family. They consumed drugs, cigarettes and alcohol with passion; their heightened sexuality proved an inherent part of their creativity and permeated everything they did. The fertility of the interaction between literature, theatre, anthropology, philosophy, politics and cinema was unrivalled by anywhere else in the world at that time, and Paris seemed to be at the heart of all that was new and brave and controversial.

Yet what did they achieve, these intellectuals in whom so much fierce hope had been placed' Postwar Parisian irresponsibility is as much the focus of Left Bank as political, artistic, moral and sexual incandescence. Agn s Poirier skilfully weaves together a collage of images and a kaleidoscope of destinies and the voices clamour from the pages, as fresh, vital and challenging as when they first were raised.

I. War was my master -- The fall -- The choice -- The fight -- The desire -- II. Modern times -- A philosophy of existence -- Lust and emancipation -- A third way -- III. The ambiguities of action -- How not to be a communist? -- Love, style, drugs, and loneliness -- Action and dissidence -- "Paris's gloom is a powerful astringent" -- IV. Sharpening the senses -- "They owned art while we were just full of dollars" -- Stimulating the nerves -- Anger, spite, and failure -- Vindicated -- Farewells and a new dawn.

A captivating portrait of those who lived, loved, fought, played and flourished in Paris between 1940 and 1950 and whose intellectual and artistic output still influences us today.

Parisian-born journalist and now London-based author Poirier (Touche) gives readers an engrossing, spirited, and intimate look at intellectual life in Paris during a critical ten-year period: the dark years of war and occupation followed by the heady excitement after liberation. She tells the story of a creative generation of artists, poets, and writers all born in the period 1905-30, and all working, living, and interacting in Paris at the same time. She explores the intertwined lives of figures such as Simone de Beauvoir, Jean-Paul Sartre, Albert Camus, Pablo Picasso, and Americans such as Norman Mailer, Richard Wright, James Baldwin, and Theodore H. White. This influential group set new moral codes, questioned the traditional roles of women, and introduced new philosophies like existentialism and new concepts such as world citizenship. Living at a time that saw the emergence of Cold War tensions, these intellectuals challenged both Western capitalism and Soviet communism in their search for new politics. This book defies simple description; part collective biography, part cultural history, it aims to make the generation of intellectuals who shaped the Paris of the 1940s familiar to readers. VERDICT For Francophiles and informed readers interested in 20th-century cultural trends.-Marie M. Mullaney, Caldwell Coll., NJ © Copyright 2018. Library Journals LLC, a wholly owned subsidiary of Media Source, Inc. No redistribution permitted.

French journalist Poirier (Touché: A French Woman's Take on the English) attempts to capture life on the Left Bank during the desperate occupation years and tumultuous postwar period through the "kaleidoscope of destinies" of its leading intellectuals and artists. Simone de Beauvoir and Jean-Paul Sartre play a central role in Poirier's narrative, drawing other writers and philosophers into their extensive professional network as well as their prolific, and sometimes messy, romantic entanglements. Poirier skillfully describes how, after the liberation of Paris, once-tight Resistance allies fragmented into cadres of Communists, right-leaning Gaullists, and adherents of Sartre's idealistic "Third Way." Amid the ongoing infighting, African-American artists such as Louis Armstrong, Miles Davis, Eartha Kitt, and Richard Wright were welcomed in Paris and performed freely there. Though the artists, musicians, and writers are the primary focus here, there's a quiet admiration for the men-including a Nazi bureaucrat-who went to great lengths to save major art works and literature from destruction or seizure prior to and during the occupation. The tight focus on high-profile figures and relative absence of working-class Parisians results in the work feeling distant and limited, almost decontextualized from daily struggles in the city. Nevertheless, Poirier humanizes the extraordinary men and women of the Left Bank, unraveling the complicated stories behind a breathtaking number of literary, philosophical, and artistic masterpieces in a singular, heartbreaking era. (Feb.) © Copyright PWxyz, LLC. All rights reserved.

In this breathless account of Parisian cultural life during and after WWII, Poirier introduces readers to a sprawling cast of philosophers, playwrights, actors, critics, painters, and others. The introduction describes the book as a collage of images and indeed this is so. Here are a raucous night on the town with Simone de Beauvoir and Jean Paul Sartre, the jubilant parade that welcomed Charles de Gaulle back to Paris after the city's liberation, restless afternoons with Richard Wright in his favorite café. Together, these images-in-words show how creative revolution was connected to radical politics and sexual liberation. Poirier has created prose that reads like a great movie montage, fast-paced, captivating, and purposeful. While it is disconcerting to read about a Jewish author's wartime disappearance in the same breath as an existentialist's effort to stay warm by inviting lovers into her bed, this makes precisely Poirier's point. During these years, terror coexisted with intimacy, heroism with passivity as writers wrote, and painters painted. As Sartre would say when asked how he and his compatriots survived the war, We lived. --Taft, Maggie Copyright 2018 Booklist

A detailed chronicle of a decade alive with intellectual and political ferment.London-based journalist Poirier (Touch: A French Woman's Take on the English, 1997), a panel member of the BBC's weekly program Dateline London, offers a gossipy, well-informed cultural history of her native Paris, beginning in 1938, with Europe on the brink of war, and ending in 1949, with the Marshall Plan in effect to help the continent recover. Organizing the book chronologically, she follows the lives of artists, writers, musicians, publishers, and performersmostly French and Americandeftly creating "a collage of images, a kaleidoscope of destinies" from memoirs, histories, biographies, and the writers' own prolific work. While some of her cast of characters (Hemingway, Sylvia Beach, Adrienne Monnier) have minor roles, others are more prominent, notably Sartre, de Beauvoir, and Camus, along with their many lovers. The decade saw the publication of some of the most influential books of the 20th century, including Sartre's Being and Nothingness, which catapulted the philosopher to international fame; de Beauvoir's The Second Sex, which became a bible for feminism; Arthur Koestler's Darkness at Noon, which revealed the author's bitter disillusionment with communism; and Samuel Beckett's iconoclastic play Waiting for Godot. These writers, and many others, shared their ideas in printin the journals Les Temps Modernes, founded by Sartre and de Beauvoir; and Combat, edited by Camusand also when they met at cafes, bars, restaurants, galleries, and theaters. Living in cheap hotel rooms or chilly apartments, they spent little time at home. Romantic liaisons were as passionate as debates over the future of Europe. "For Paris existentialists," Poirier writes, "friendship seemed as complicated as love. Fallings-out and reconciliations came in quick succession, politics and sex playing a central part." By 1948, Paris had become "the capital of sin and moral ambiguity," attracting hordes of Americans (Norman Mailer, Richard Wright, James Baldwin), some funded by the GI Bill.An animated, abundantly populated history of dramatic times. Copyright Kirkus Reviews, used with permission.
More book reviews at iDreamBooks.com