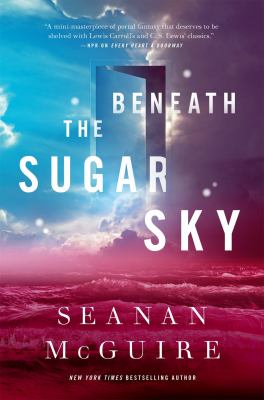 Beneath the sugar sky / Seanan McGuire.

DDC classification: 813/.6 Summary: Beneath the Sugar Sky returns to Eleanor West's Home for Wayward Children. At this magical boarding school, children who have experienced fantasy adventures are reintroduced to the "real" world. Sumi died years before her prophesied daughter Rini could be born. Rini was born anyway, and now she's trying to bring her mother back from a world without magic.
Tags from this library: No tags from this library for this title. Log in to add tags.
Fiction notes: Click to open in new window

Beneath the Sugar Sky, the third book in McGuire's Wayward Children series, returns to Eleanor West's Home for Wayward Children in a stand-alone contemporary fantasy for fans of all ages. At this magical boarding school, children who have experienced fantasy adventures are reintroduced to the "real" world. When Rini lands with a literal splash in the pond behind Eleanor West's Home for Wayward Children, the last thing she expects to find is that her mother, Sumi, died years before Rini was even conceived. But Rini can't let reality get in the way of her quest--not when she has an entire world to save!Good thing the student body is well-acquainted with quests. . . .

Beneath the Sugar Sky returns to Eleanor West's Home for Wayward Children. At this magical boarding school, children who have experienced fantasy adventures are reintroduced to the "real" world. Sumi died years before her prophesied daughter Rini could be born. Rini was born anyway, and now she's trying to bring her mother back from a world without magic.

Eleanor West's Home for Wayward Children is a magical boarding school that reintroduces children who had embarked on otherworldly adventures back into reality. Some of those waiting to return, such as Christopher and Maya, find other ways to occupy their time. When a girl crash-lands in their pond, they discover that Rini is searching for a way to save her home, the World of Confection. The key is with her mother, Sumi, who died years ago-long before Rini was born. However, who in this home is going to let something like the real world get in their way? VERDICT This third stand-alone volume in McGuire's highly popular novella series (after Every Heart a Doorway and Down Among the Sticks and Bones) pulls bits from the other titles, but no more than is needed as a bridge among the books. Elegant prose strengthens this inviting portal fantasy.-KC © Copyright 2017. Library Journals LLC, a wholly owned subsidiary of Media Source, Inc. No redistribution permitted.

McGuire's delicious third book (after 2017's Down Among the Sticks and Bones) to feature the teens of Eleanor West's Home for Wayward Children-kids who have found doors to fantastical worlds and are desperate to return to them-opens with a girl falling from the sky into a pond on school grounds, causing quite a stir. Rini Onishi has come from a world called Confection to get back her mother, Sumi. Inconveniently, Sumi is dead, and she'll need to be rebuilt from the bones up so that Rini's life won't be undone. Several of the strange children at the home offer to help Rini, but when they get to Confection, they're captured by the fearsome Queen of Cakes. What follows is a lush, darkly whimsical adventure full of wonders such as a pink soda sea, candy corn fields, and a castle made of gingerbread, all made grim by the characters' desperation to get Rini's mother back before it's too late. Readers will be thrilled to see old friends and meet new ones in this scrumptious tale that emphasizes acceptance, kindness, and the enduring value of friendship. Agent: Diana Fox, Fox Literary. (Jan.) © Copyright PWxyz, LLC. All rights reserved.

*Starred Review* McGuire's latest Wayward Children book (after Down among the Sticks and Bones, 2017) laces the threads of time into an impossible knot. Eleanor West's pupils are disrupted by the arrival of newcomer Rini. She claims to be the child of murdered Sumi, who somehow grew older and had a family in the Nonsense world of Confection. Rini is literally running out of time she is physically disintegrating, as she logically should not exist. Classmates Christopher, Kade, Cora, and Nadya agree to break the cardinal rule of No Quests to help Rini save her world. The true standout of this story is Cora, who longs to return to her watery world, but her keen sense of observation and quiet bravery are vital to the quest. As the motley crew travels through worlds, readers will thrill to encounter familiar characters and marvel at the sugar-studded landscape of Confection. McGuire suggests entire universes in a few spare sentences, and the delightfully diverse cast of characters is similarly conjured. We're told some doors open only once, but readers will beg McGuire to keep the door open to these worlds in perpetuity. Phenomenal.--Howerton, Erin Downey Copyright 2017 Booklist

In the third Wayward Children novella, experienced teenage questers who have returned to Earth attempt to rewrite a magical land's past and future.Eleanor West's Home for Wayward Children is for those young people who found a door to a fantastical world and then, inadvertently, often unwillingly, found their way back through it again. Nevertheless, it's a big surprise when one day a portal opens on the grounds of the school itself, dropping a teenage girl from the sky into the turtle pond. It's an even bigger surprise when she identifies herself as Rini, daughter of Sumia former student at the school who was murdered before she had any children (Every Heart a Doorway, 2016). But Sumi is/was the destined savior of Confection, a world of baked goods and Nonsense, and a world governed by Nonsense can often be flexible with time and dispense with causality entirely. Can Rini and Sumi's former schoolmates manage to bring Sumi back from the dead and into her rightful place before Rini ceases to exist and the petulant and malicious Queen of Cakes' dominion becomes complete? McGuire has assembled a richly drawn group of adventurers with a complex mix of magical and mundane issues, including a trans young man whose publicly avowed gender identity got him rejected both by the fairyland of Prism and his family of origin on Earth and a young woman emotionally wounded by constant fat-shaming on Earth but whose body type and athleticism served her well as a mermaid in the oceanic depths.Fully dimensional characterization and a compelling story arc keep this series moving. Copyright Kirkus Reviews, used with permission.
More book reviews at iDreamBooks.com