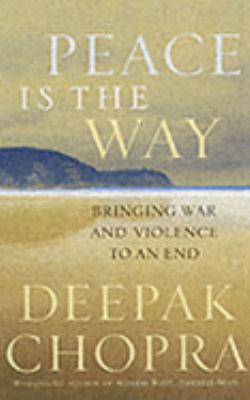 Peace is the way : bringing war and violence to an end / Deepak Chopra.

Deepak Chopra's new book takes its title from a famous quotation by Mahatma Gandhi: 'There is no way to peace. Peace is the way.' Mere variations on the theme of conflict will never get us where we want to go. We must take an evolutionary leap into a new way of being. According to Dr Chopra, war is a deeply engrained habit that needs to be replaced. And beyond that, 'If the way of peace is to succeed, it must offer a substitute for everything war now offers.' More than this, Chopra contends that the majority of people have already evolved beyond war. The way of peace is the next step in their journey of personal growth. War is an outlet for fear, a stage for the enactment of courage and heroism, a display of machismo, and the contest of good versus evil. PEACE IS THE WAY shows how each of us can end our need for these things. This stimulating new book offers a seven-step programme for changing the reader's consciousness. War ends with one person at a time, Chopra argues, and if enough people expand their awareness, we will reach critical mass, at which point the entire consciousness of the planet can shift away from war forever. Inspiring, thoughtful, timely and skilfully-crafted, PEACE IS THE WAY is reminiscent of HOW TO KNOW GOD in its scope and vision for the future of the world. 'I absolutely agree with Dr Chopra's view that if we want to change the world, we have to begin by changing ourselves.' The Dalai Lama

This latest work from Chopra (The Book of Secrets) comes armed with praise from the likes of the Dalai Lama, Desmond Tutu, Wayne Dyer, and Boutros Boutros-Ghali. Chopra is distressed at the omnipresence of violent conflict in our time and finds his remedy in the acknowledgment and rejection of the dualities and false sense of self that lie at its root. Beyond these, he counsels, lies the compassion that will help us reject violence. "The opposite of compassion has to be renounced, because in anger, vengeance, mechanized death, and violence against Nature is our doom." The text includes "Seven Practices for Peacemakers," a kind of mini-handbook for nonviolent leaders. For most collections. (c) Copyright 2010. Library Journals LLC, a wholly owned subsidiary of Media Source, Inc. No redistribution permitted.

Chopra's latest work is prefaced by endorsements from four Nobel Peace Laureates, Muhammad Ali and an impressive array of other notables. Here, the Indian-born doctor and author of the bestselling The Seven Spiritual Laws of Success and other popular spiritual guides contends that the deeply ingrained human habit of resorting to violence can be ended by raising the consciousness of individuals until there is a global change in awareness, similar to the shift that took place when the age of science took hold. Chopra, whose bestsellers and celebrity-friendliness have saddled him with a reputation for being guru to the rich and comfortable, is refreshingly honest about the way our comfort and security are ultimately the fruits of war. "The satisfaction of waging war cannot be replaced by philosophy or religion," he writes. In addition to analysis, he offers daily practices of meditation, thought and actions on behalf of others as a way to live the truth of Mahatma Gandhi's famous quote: "There is no way to peace. Peace is the way." Ultimately, however, the ego itself has to be disarmed to live the way of peace, he says: "For me as an individual to be free, I have to confront myself with questions about who I really am, and this is done in large part by examining the layers of false identity that I mistakenly call me." This is clearly harder to practice than it is to read. Still, Chopra's affirmation that "our true identity is at the level of spirit and nowhere else" has the ring of truth and so does the rest of this simple, practical, inspiring book. Major ad/promo. (Jan. 18) (c) Copyright PWxyz, LLC. All rights reserved

The highly popular Chopra extends his New Age philosophy beyond the usual self-help milieu into world peace. Citing Mahatma Gandhi, he contends that no previous antiwar movements have been successful and one needs to change what has been proven not to work. Toward that end, Chopra encourages listeners to make peace a part of their spiritual life in order to promote peace worldwide. Seven steps offer instruction to concentrate on a particular thought or activity for each day of the week in an effort to bring about the conscious evolution of humankind. While many would agree that world peace is a desired goal, the author's arguments are simplistic and filled with personal anecdotes that stretch the point he's trying to make. Chopra recommends a Google search strategy to his audience to find the sites he used; he doesn't seem to have any caveats about the reliability of web search results. Read by Shishir Kurup, this program is not recommended except where there is an avid fan base.--Deb West, Gannon Univ. Lib., Erie, PA (c) Copyright 2010. Library Journals LLC, a wholly owned subsidiary of Media Source, Inc. No redistribution permitted. All rights reserved.

Chopra takes his belief in the ability of the mind to move mountains and applies it to the biggest mountain of all--war. Taking the title of his book from Ghandi ("There is no way to peace. Peace is the way"), Chopra begins with the observation, "Today is a good day for war to come to an end." For all those who hunger to make that statement true, he offers what he believes is a pathway. He begins with a discussion of the reasons for war--it's a habit, and it has the eternal appeal of good battling evil--and then shows how the myriad justifications are all illusions. Also discussed is the toxicity of nationalism, a notion that is applied to the U.S and to those who believe in this country's right to make the world adhere to its will. Whether Chopra's admonitions will have an effect on the powerful around the world is certainly arguable, but he counters such skepticism with the unswerving belief that change occurs only when there is a leap of consciousness. If enough people change their minds about peace, the world can transform itself. Not content with broad platitudes, Chopra offers a seven-point plan for every individual; each step, from meditating for peace to acting peacefully, seems painfully simple, but Chopra makes a convincing case that peace must begin with each of us. --Ilene Cooper Copyright 2005 Booklist
More book reviews at iDreamBooks.com