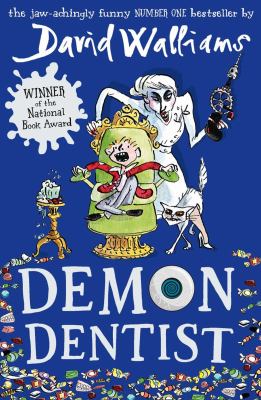 Summary: Darkness had come to the town. Strange things were happening in the dead of night. Children would put a tooth under their pillow for the tooth fairy, but in the morning they would wake up to find ... a dead slug ; a live spider ; hundreds of earwigs. Evil was at work, but who or what was behind it?
Tags from this library: No tags from this library for this title. Log in to add tags.

The latest jaw-achingly funny, number-one bestselling novel from David Walliams - now out in paperback. Make your appointment if you dare...

Darkness had come to the town. Strange things were happening in the dead of night. Children would put a tooth under their pillow for the tooth fairy, but in the morning they would wake up to find... a dead slug; a live spider; hundreds of earwigs creeping and crawling beneath their pillow.

Evil was at work. But who or what was behind it...?

Read this book and find out!

Darkness had come to the town. Strange things were happening in the dead of night. Children would put a tooth under their pillow for the tooth fairy, but in the morning they would wake up to find ... a dead slug ; a live spider ; hundreds of earwigs. Evil was at work, but who or what was behind it?

A bestselling author for children in the U.K., comedian Walliams (Mr. Stink) promises "a horror story. With quite a lot of made-up words" in the preface to this novel, and what follows is indeed a ghastly affair. Alfie Griffith, 12, has it rough: dead mother, dying father, and an early-life experience with the dentist so grisly that he never returned, leaving him with a mouthful of rotting teeth. When a new dentist arrives, Alfie's social worker insists he visit, even though Miss Root is clearly evil. Her arrival coincides with a disturbing crime spree: teeth left under pillows are replaced not with shillings but with horrifying calling cards: a human eyeball, a dead cockroach, a bat wing (still flapping). The grotesqueries evoke Dahl, but the comparison ends there. The jokes are stale (especially the ones at the expense of the overweight social worker), the adults all buffoons, and the plot a couple hundred pages longer than necessary. Ross's humorous illustrations recall Quentin Blake's, but aren't enough to buoy the sagging adventure or an ending so sugar-coated it would keep Miss Root in business for years. Ages 8-12. (Mar.) © Copyright PWxyz, LLC. All rights reserved.

Gr 4-6-Somewhere out there, the ghost of Roald Dahl is musing, "Teeth? Of course, teeth!" Walliams's tale is a little darker, scarier, more PG-rated, but still Dahl-esque in the extreme. Twelve-year-old Alfie's had a rough time-no mother, a loving but very ill dad, and the memory of a particularly traumatic dental experience that has resulted in a mouth full of rotting teeth. When the new dentist in town shows up at a school assembly, Alfie's convinced that she is evil, and it turns out he's absolutely right. Absurd comedy meets creepy horror, with a little family drama thrown in, all of it racing by at a breakneck pace, with a few pauses for underwear gags, toilet humor, and other kid-friendly shtick. Supporting characters sometimes edge perilously close to cliché, but there are a few standouts, including Dad and Gabz (who is NOT Alfie's girlfriend, as he points out many, many times). The whole package is extremely British, but American readers should feel comfortable enough, thanks to Ross's familiar illustrations and most middle graders' knowledge of all things Muggle. VERDICT Frenetic humor for middle grade fans of the funny and fearsome.-Mara Alpert, Los Angeles Public Library © Copyright 2016. Library Journals LLC, a wholly owned subsidiary of Media Source, Inc. No redistribution permitted.

After a particularly traumatic trip to the dentist, Alfie never set foot in a dental practice again, and his yellowed, spotty gnashers are proof. But a new dentist has come to town austere, creepy Dr. Root, who insists children call her Mummy and Alfie's social worker is determined to shine up his chompers. Meanwhile, kids all over town are putting teeth under their pillows, only to discover gruesome prizes (a wasp nest! a flattened toad!) the next morning, instead of shiny coins. Alfie and his friend Gabz are certain Dr. Root is responsible and start investigating, but before long, they are at the mercy of the maniacal dentist's evil schemes. British comedian Walliams warns readers that this is a horror story, and he mostly delivers on that promise, but the over-the-top plot turns, sometimes repetitive jokes, and ragged pacing often dampen the fright factor. Though comparisons to Roald Dahl are inevitable helped in no small part by Ross' exceptionally Quentin Blake-like illustrations Walliams' grotesque characters, incompetent adults, and plucky children lack what Dahl's books have truckloads of: heart. HIGH-DEMAND BACKSTORY: Walliams' series is a big hit across the pond, and his first foray into the U.S. publishing scene is getting the royal treatment.--Hunter, Sarah Copyright 2015 Booklist

Walliams drills into a primal fear with this tale of a new dentist with a decidedly evil agenda. In a blatant grab at Roald Dahl fans, the author pulls out a cast of cheeky children, thoroughly rotten villains, and clueless but well-meaning grown-ups for a Brit-flavored romp that combines moments of intense terror and bracing courage with biting satireoh, and gruesome bits. Ross offers a plethora of loosely sketched ink-and-wash vignettes generally indistinguishable from Quentin Blake's. All over town, children have been putting lost teeth beneath their pillows and, instead of money, getting cat poo, oozing scabs, and like rewards. Worse yet, following shocked comments about the state of 12-year-old Alfie's "teet," canny Winnie, a flamboyant new West Indian social worker, tricks the lad into visiting the newly arrived (with her cat, Fang) dentist, Miss Root. Alfie regains consciousness with nary a tooth in his mouthit seems that Miss Root is the Tooth Witch herself. She's not to be stopped, either, without help from new, dreadlocked friend (not girlfriend) Gabz, a vat of acid with revolting ingredients (carefully listed), and lots of dynamite. Walliams spritzes the narrative with made-up but not particularly inventive words and large-type screaming. Winnie, dark-skinned Gabz (short for Gabriella), and newsagent Raj are the only notable nonwhite characters; Winnie's accent is an unfortunate running joke. A quick pull on a reliable, if not exactly minty-fresh, formula. (pictorial cast list) (Horror. 9-11) Copyright Kirkus Reviews, used with permission.
More book reviews at iDreamBooks.com