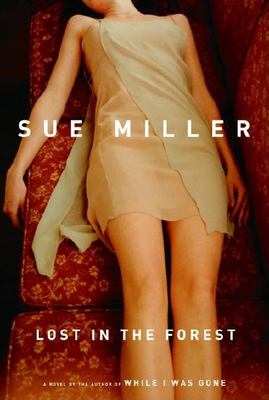 Lost in the forest / by Sue Miller.

| Traffic accident victims -- Family -- Relationships -- Fiction | FamiliesGenre/Form: Domestic fiction. | Psychological fiction. | General fiction.DDC classification: 813/.54 Online resources: Contributor biographical information | Publisher description | Sample text Subject: John's sudden death in a road accident changes everything. His widow, Eva, struggles with the desolation of loneliness, finding herself drawn back to her untrustworthy ex-husband and his son, Theo, who can only begin to fathom the permenance of his father's death.
Tags from this library: No tags from this library for this title. Log in to add tags.
Fiction notes: Click to open in new window

For nearly two decades, since the publication of her iconic first novel,The Good Mother,Sue Miller has distinguished herself as one of our most elegant and widely celebrated chroniclers of family life, with a singular gift for laying bare the interior lives of her characters. In each of her novels, Miller has written with exquisite precision about the experience of grace in daily life--the sudden, epiphanic recognition of the extraordinary amid the ordinary--as well as the sharp and unexpected motions of the human heart away from it, toward an unruly netherworld of upheaval and desire. But never before have Miller's powers been keener or more transfixing than they are inLost in the Forest,a novel set in the vineyards of Northern California that tells the story of a young girl who, in the wake of a tragic accident, seeks solace in a damaging love affair with a much older man. Eva, a divorced and happily remarried mother of three, runs a small bookstore in a town north of San Francisco. When her second husband, John, is killed in a car accident, her family's fragile peace is once again overtaken by loss. Emily, the eldest, must grapple with newfound independence and responsibility. Theo, the youngest, can only begin to fathom his father's death. But for Daisy, the middle child, John's absence opens up a world of bewilderment, exposing her at the onset of adolescence to the chaos and instability that hover just beyond the safety of parental love. In her sorrow, Daisy embarks on a harrowing sexual odyssey, a journey that will cast her even farther out onto the harsh promontory of adulthood and lost hope. With astonishing sensuality and immediacy,Lost in the Forestmoves through the most intimate realms of domestic life, from grief and sex to adolescence and marriage. It is a stunning, kaleidoscopic evocation of a family in crisis, written with delicacy and masterful care. For her lifelong fans and those just discovering Sue Miller for the first time, here is a rich and gorgeously layered tale of a family breaking apart and coming back together again: Sue Miller at her inimitable best.

John's sudden death in a road accident changes everything. His widow, Eva, struggles with the desolation of loneliness, finding herself drawn back to her untrustworthy ex-husband and his son, Theo, who can only begin to fathom the permenance of his father's death.

Following her successful memoir, The Story of My Father, Miller returns to fiction with this dramatic tale of a family in trouble. Young, middle-class Eva was shattered by the divorce that followed her husband's infidelity but eventually bounced back, thanks largely to John, her prosperous and kindly second husband. During five years of happy marriage, he has been a wonderful stepfather to Eva's two daughters, and he dotes on their two-year-old son. When John dies suddenly, despair overwhelms the household. Deep in her own grief, Eva misreads the needs of her complex middle child, Daisy. Sad, confused, and feeling ignored, the teenage girl is lured into a sexual relationship with Duncan, an older man married to Eva's closest friend. Internal and familial tensions escalate until birth father Mark somewhat reluctantly asserts himself, risking behavior that may either restore harmony or impose further pain on the wounded people he loves. As usual, Miller displays a fine ear for adult-child interactions, and this novel's themes of identity, personal responsibility, and victimization make it a good book-club candidate. Recommended for most collections. [See Prepub Alert, LJ 12/04.]-Starr E. Smith, Fairfax Cty. P.L., VA (c) Copyright 2010. Library Journals LLC, a wholly owned subsidiary of Media Source, Inc. No redistribution permitted.

In her riveting new novel, Miller once again demonstrates her singular gift for capturing the rhythms of daily family life with laserlike clarity while also summoning the turbulent emotions swirling just beneath the surface. Eva, the divorced and happily remarried mother of three, has finally put the disaster of her first marriage behind her and has even become good friends with her ex. Then her second husband is killed in a tragic accident, and the peace Eva has worked so hard to attain is instantly shattered as she succumbs to an overwhelming grief. Her middle child, Daisy, was extremely close to her stepfather and is emotionally paralyzed by the sudden turn of events, unable to process or even speak of her grief. While her older sister, Emily, pretty and popular, is able to reach outside the family for support, and her brother, Theo, is too young to understand what happened, Daisy feels utterly trapped by her own misery and abruptly embarks on an ill-advised affair with a much older, married man. In one of her shortest yet richest novels, Miller insightfully explores the shifting dynamics between parent and child, a married couple, ex-spouses, and siblings. And as in The Good Mother (1986), she takes a volatile sexual dynamic--in this case, an inappropriate relationship, bordering on pedophilia--and explores it from all sides. It's easy to underestimate Miller's artistry because her writing is never showy. All she does in this fluidly written, perfectly paced novel is to show us what being a family really means. --Joanne Wilkinson Copyright 2005 Booklist

In the latest from Miller (The World Below, 2001, etc.), a family member's death alters the established patterns and rhythms among those who survive. Eva's second husband, John, is killed by a car while on a walk with Eva and their three-year-old son, Theo. Eva, who runs a bookstore in California wine country, is understandably devastated. Temporarily unable to cope, she sends Theo and his half-sisters, popular high-school senior Emily and gawky 14-year-old Daisy, to their father, her ex-husband Mark, a winegrower. Mark and Eva's marriage, full of early passion, had ended when Mark, in a misguided attempt at intimacy, confessed an affair. Eva's marriage to the older, truly nice John had been calmer, but their love was genuine and deep. The children return to Eva's house after a few days, but as the months pass, Mark finds himself wooing Eva through the kids, including Theo, for whom he forms quite a lovely attachment. Miller tips the story's balance by flashing forward occasionally to the adult Daisy's conversations with her therapist. While her parents flirt and skirt around each other and Emily goes off to college, Daisy, who has always lived in Emily's shadow, is full of unexpressed depths of grief because John had been the one parent figure she felt really saw her for herself. When Duncan, the physically and emotionally damaged husband of Eva's best friend, catches her pilfering from the cash register at Eva's store, he insinuates himself into Daisy's life. Unaware of her own emerging beauty, Daisy is extremely needy and vulnerable--and extremely angry. A twisted sexual relationship begins. Eva is too wrapped up in her own struggles to notice, but Mark, whom Eva has rebuffed as suitor, steps in and rescues Daisy, who is one tough cookie. The family reshapes itself. Miller at her best: engrossing characters and a plot that turns unexpected corners. Copyright ©Kirkus Reviews, used with permission.
More book reviews at iDreamBooks.com