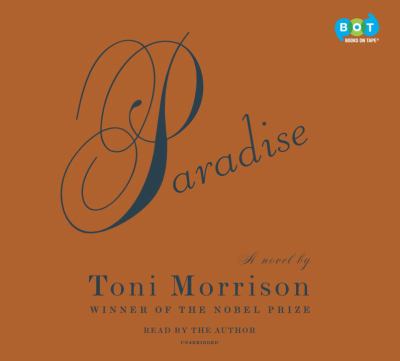 Genre/Form: Audiobooks. | Domestic fiction. | Historical fiction.DDC classification: 813/.54 Read by the author.Summary: As the novel begins deep in Oklahoma early one morning in 1976, nine men from Ruby assault the nearby Convent and the women in it.
Tags from this library: No tags from this library for this title. Log in to add tags.
Fiction notes: Click to open in new window

"Rumors had been whispered for more than a year. Outrages that had been accumulating all along took shape as evidence. A mother was knocked down the stairs by her cold-eyed daughter. Four damaged infants were born in one family. Daughters refused to get out of bed. Brides disappeared on their honeymoons. Two brothers shot each other on New Year's Day. Trips to Demby for VD shots common. And what went on at the Oven these days was not to be believed . . . The proof they had been collecting since the terrible discovery in the spring could not be denied: the one thing that connected all these catastrophes was in the Convent. And in the Convent were those women."

In Paradise --her first novel since she was awarded the Nobel Prize for Literature--Toni Morrison gives us a bravura performance. As the book begins deep in Oklahoma early one morning in 1976, nine men from Ruby (pop. 360), in defense of "the one all-black town worth the pain," assault the nearby Convent and the women in it. From the town's ancestral origins in 1890 to the fateful day of the assault, Paradise tells the story of a people ever mindful of the relationship between their spectacular history and a void "Out There . . . where random and organized evil erupted when and where it chose." Richly imagined and elegantly composed, Paradise weaves a powerful mystery.

Read by the author.

As the novel begins deep in Oklahoma early one morning in 1976, nine men from Ruby assault the nearby Convent and the women in it.

Nobel laureate Morrison creates another richly told tale that grapples with her ongoing, central concerns: women's lives and the African American experience. Morrison has created a long list of characters for this story that takes place in the all-black town of Ruby, Oklahoma, population 360, which was founded by freed slaves. In what could be seen as an attempt to create some of the same mysticism that was present in many of her previous works, Morrison alludes to Ruby's founding citizens, now ghosts, and only minimally focuses on the present generations that have let the founding principles of Ruby's forebears deteriorate. Paradise is an examination of the title itself and deliberately builds into a plot that is unexpected and explosive. This is Morrison's first novel since her 1993 Jazz, and it is well worth the wait. Highly Recommended for all collections. [Previewed in Prepub Alert, LJ 10/1/97.]Emily J. Jones, "Library Journal" (c) Copyright 2010. Library Journals LLC, a wholly owned subsidiary of Media Source, Inc. No redistribution permitted.

So intense and evocative in its particulars, so wide-ranging in its arch, this is another, if imperfect, triumph for the Nobel Prize-winning author (Song of Solomon; Beloved; etc.). In 1950, a core group of nine old families leaves the increasingly corrupted African American community of Haven, Okla., to found in that same state a new, purer community they call Ruby. But in the early 1970s, the outside world begins to intrude on Ruby's isolation, forcing a tragic confrontation. It's about this time, too, that the first of five damaged women finds solace in a decrepit former convent near Ruby. Once the pleasure palace of an embezzler, the convent had been covered with lascivious fixtures that were packed away or painted over by the nuns. Time has left only "traces of the sisters' failed industry," however, making the building a crumbling, fertile amalgam of feminine piety and female sexuality. It's a woman's world that attracts the women of Rubyand that repels the men who see its occupants as the locus of all the town's ills. They are "not women locked safely away from men; but worse, women who chose themselves for company, which is to say not a convent but a coven." Only when Morrison treats the convent women as an entity (rather than as individual characters) do they lose nuance, and that's when the book falters. Still, the individual stories of both the women and the townspeople reveal Morrison at her best. Tragic, ugly, beautiful, these lives are the result of personal dreams and misfortune; of a history that encompasses Reconstruction and Vietnam; and of mystical grandeur. 400,000 first printing; simultaneous audio and large print editions (ISBN 0-375-40179-2; -70217-2) (Jan.) (c) Copyright PWxyz, LLC. All rights reserved

We all long for paradise, although we are apparently incapable of creating one. And America, immense and wild at heart, has always made paradise seem possible to the oppressed, the enraptured, and the lost. It is this dream of utopia in a world of tangled and deeply rooted conflicts that Morrison explores and dramatizes in this tentacled and gripping novel about life in a small, all-black Oklahoma town during the 1970s. Oklahoma is spacious enough for people to achieve physical and moral isolation, which is just what the determined citizens of Ruby have done. Descendants of slaves who founded a town called Haven during Reconstruction, the people of Ruby are proud of their pure African American heritage, their religious convictions, and their prosperity, and not at all welcoming of strangers, especially the suspect females congregating at an old mansion known as the Convent. Once a school for Indian girls, it is now the home of an enigmatic, beautiful, and racially ambiguous woman named Consolata. Young women hitchhiking their way cross-country or driving stolen cars--refugees from domestic violence, disastrous love affairs, and madness--begin to appear at Consolata's door as if by magic. As Morrison braids together their wrenching stories and the stories of Ruby--the stern twin brothers who own the bank, their forgiving wives, young people feeling the pull of the greater world, a preacher skeptical of the town's insularity--she subtly connects their travails to tragedies of the past, including the Vietnam War and the assassination of Martin Luther King Jr., as well as to the pervasiveness of "disorder, deception, and drift." Morrison is at her complex and commanding best in this mysterious tale as she presents a unique perspective on American history and leaves her dazzled readers shaking their heads over all that is perpetually inexplicable between men and women, rich and poor, the tyrannical and the free spirited. --Donna Seaman

'The Hollywood Reporter' reports today that billionaire/media mogul/TV show host/magazine publisher/former poverty-stricken Mississippian/book champion/actor/film producer Oprah Winfrey has settled on Toni Morrison's 1998 novel 'Paradise' as her next telefilm adaptation. 'Paradise' was Morrison's first novel following her awarding of the Nobel Prize. In late 1997, before Knopf released the book, 'Kirkus Reviews,' in a starred review, called it "a breathtaking, risk-taking major work that will have readers feverishly, and fearfully turning the pages." The review in full: "The violence men inflict on women and the painful irony of an "all-black town" whose citizens themselves become oppressors are the central themes of Morrison's rich, symphonic seventh novel (after Jazz, 1992, etc.). "The story begins with a scene of Faulknerian intensity: In 1976, in rural Oklahoma, nine men from the nearby town of Ruby attack a former convent now occupied by women fleeing from abusive husbands or lovers, or otherwise unhappy pasts--"women who chose themselves for company," whose solidarity and solitude rebuke the male-dominated culture that now exacts its revenge. That sounds simplistic, but the novel isn't, because Morrison makes of it a many-layered mystery, interweaving the individual stories of these women with an amazingly compact social history of Ruby's "founding" families and their interrelationships over several decades. It all comes at us in fragments, and we gradually piece together the tale of black freedmen after the Civil War gradually acquiring land and power, taking pride in the culture they've built--vividly symbolized by a memorial called "the Oven," the site of a communal field kitchen into whose stone is etched the biblical command "Beware the Furrow of His Brow." That wrathful prophecy is fulfilled as the years pass, feuds between families and even a rivalry between twin brothers grow ever more dangerous, and in the wake of "the desolation that rose after King's murder," Ruby succumbs to militancy; a Black Power fist is painted on the Oven, and the handwriting is on the wall. With astonishing fluency, Morrison connects the histories of the Convent's insulted and injured women with that of the community they oppose but cannot escape. Only her very occasional resort to digressive (and accusatory) summary (e.g., "They think they have outfoxed the whiteman when in fact they imitate him") mars the pristine surface of an otherwise impeccably composed, deeply disturbing story. "Not perfect--but a breathtaking, risk-taking major work that will have readers feverishly, and fearfully turning the pages." Copyright ©Kirkus Reviews, used with permission.
More book reviews at iDreamBooks.com