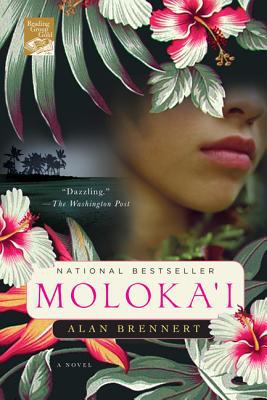 Genre/Form: Historical fiction.DDC classification: 813/.54 | FIC Summary: Seven-year-old Rachel is forcibly removed from her family's 1890s Honolulu home when she contracts leprosy and is placed in a settlement, where she loses a series of new friends before new medical discoveries enable her to reenter the world.
Tags from this library: No tags from this library for this title. Log in to add tags.
Fiction notes: Click to open in new window

This richly imagined novel, set in Hawai'i more than a century ago, is an extraordinary epic of a little-known time and place---and a deeply moving testament to the resiliency of the human spirit.

Rachel Kalama, a spirited seven-year-old Hawaiian girl, dreams of visiting far-off lands like her father, a merchant seaman. Then one day a rose-colored mark appears on her skin, and those dreams are stolen from her. Taken from her home and family, Rachel is sent to Kalaupapa, the quarantined leprosy settlement on the island of Moloka'i. Here her life is supposed to end---but instead she discovers it is only just beginning.

With a vibrant cast of vividly realized characters, Moloka'i is the true-to-life chronicle of a people who embraced life in the face of death. Such is the warmth, humor, and compassion of this novel that "few readers will remain unchanged by Rachel's story" (mostlyfiction.com).

Seven-year-old Rachel is forcibly removed from her family's 1890s Honolulu home when she contracts leprosy and is placed in a settlement, where she loses a series of new friends before new medical discoveries enable her to reenter the world.

Compellingly original in its conceit, Brennert's sweeping debut novel tracks the grim struggle of a Hawaiian woman who contracts leprosy as a child in Honolulu during the 1890s and is deported to the island of Moloka'i, where she grows to adulthood at the quarantined settlement of Kalaupapa. Rachel Kalama is the plucky, seven-year-old heroine whose family is devastated when first her uncle Pono and then she develop leprous sores and are quarantined with the disease. While Rachel's symptoms remain mild during her youth, she watches others her age dying from the disease in near total isolation from family and friends. Rachel finds happiness when she meets Kenji Utagawa, a fellow leprosy victim whose illness brings shame on his Japanese family. After a tender courtship, Rachel and Kenji marry and have a daughter, but the birth of their healthy baby brings as much grief as joy, when they must give her up for adoption to prevent infection. The couple cope with the loss of their daughter and settle into a productive working life until Kenji tries to stop a quarantined U.S. soldier from beating up his girlfriend and is tragically killed in the subsequent fight. The poignant concluding chapters portray Rachel's final years after sulfa drugs are discovered as a cure, leaving her free to abandon Moloka'i and seek out her family and daughter. Brennert's compassion makes Rachel a memorable character, and his smooth storytelling vividly brings early 20th-century Hawaii to life. Leprosy may seem a macabre subject, but Brennert transforms the material into a touching, lovely account of a woman's journey as she rises above the limitations of a devastating illness. (Oct.) (c) Copyright PWxyz, LLC. All rights reserved

A gritty story of love and survival in a Hawaiian leper colony: more a portrait of old Hawaii than a compelling narrative. The chronicle of leprosy-infected Rachel Kalama begins in 1891 in Honolulu and ends in the late 1960s on isolated Moloka'i, site of the Kalaupapa Leprosy settlement. As much a record of her life as of the changes in Hawaii itself over the years, screenwriter and fantasy author Brennert (Her Pilgrim Soul, 1990, etc.) vividly and graphically details both the landscape and the disease as he tells Rachel's story. She's five at the start, when her father, a sailor, comes back in time for Christmas with another doll for her collection and gifts for her older siblings Sarah, Ben, and Kimo. A few months later, Rachel is found to have leprosy, and the happy life the family has enjoyed ends. Considered dangerously contagious, Rachel is sent to the settlement on Molaka'i. There, in a hospital run by Catholic nuns, she lives with other young girls affected in varying degrees. As the years pass, Rachel's friends die; she befriends Sister Catherine, whose affection will sustain her; but, with the exception of her father, she has no contact with her family. Poor Rachel is doomed not only to suffer horribly but also to bear witness to history: a history that includes the end of the monarchy, the US annexation, the arrival of movies and airplanes, the Depression, and Pearl Harbor. Brennert also details changes in the treatment of leprosy--herbal injections, surgery, and, finally, the cure in the 1940's: sulfa derivatives. While Hawaii changes, Rachel grows up, falls in love, and marries Kenji, a fellow patient. She bears a daughter, but Ruth must immediately give the child up for adoption to avoid infection. Amid the heartbreak, Kenji is murdered and Rachel's symptoms worsen (she loses the fingers of her right hand). Rachel, though, is a survivor, and unexpected reunions compensate as she returns to a much-changed Honolulu. Not a comfortable read, but certainly instructive. Copyright ©Kirkus Reviews, used with permission.
More book reviews at iDreamBooks.com