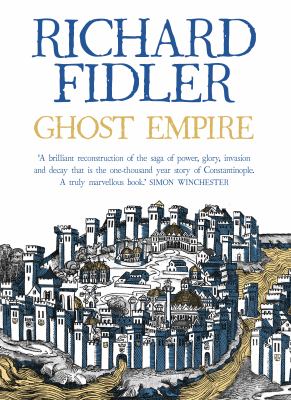 Summary: Ghost Empire is about the history of Constantinople up to the conquest by the Ottoman Empire interspaced with the experiences of Fidler and his son who took a trip to Istanbul in 2014.
Tags from this library: No tags from this library for this title. Log in to add tags.

'A brilliant reconstruction of the saga of power, glory, invasion and decay that is the one-thousand year story of Constantinople. A truly marvellous book.' - Simon Winchester

In 2014, Richard Fidler and his son Joe made a journey to Istanbul. Fired by Richard's passion for the rich history of the dazzling Byzantine Empire - centred around the legendary Constantinople - we are swept into some of the most extraordinary tales in history. The clash of civilisations, the fall of empires, the rise of Christianity, revenge, lust, murder. Turbulent stories from the past are brought vividly to life at the same time as a father navigates the unfolding changes in his relationship with his son.

GHOST EMPIRE is a revelation: a beautifully written ode to a lost civilization, and a warmly observed father-son adventure far from home.

Ghost Empire is about the history of Constantinople up to the conquest by the Ottoman Empire interspaced with the experiences of Fidler and his son who took a trip to Istanbul in 2014.

While traveling with his teenage son, debut author Fidler, the host of a popular radio program in Australia, felt inspired to write a history of Constantinople. Combining history and travelog, he details his visits to well-known sites such as the Hagia Sophia, the Hippodrome, and the Theodosian Walls, expounding on the role each location played in the city's history. He covers the key events of Constantinople from 330 CE, when it was founded as the new capital of the Roman Empire, to its fall in 1453, when it was captured by the Ottoman Turks and renamed Istanbul. During the journey, Fidler introduces fascinating characters such as Constantine the Great, Justinian, and Empress Irene of Athens. He underscores the many violent conflicts throughout Constantinople's existence, including those with the Persian Empire, the Crusaders, and the Turks. He also notes the city's important contributions to the modern world. Fidler's prose is lively and entertaining; he has a great affection for his subject and often describes it in a way that makes it seem magical. VERDICT Strongly recommended for anyone interested in traveling to Istanbul and in its history.-Dave Pugl, Ela Area P.L., Lake Zurich, IL © Copyright 2017. Library Journals LLC, a wholly owned subsidiary of Media Source, Inc. No redistribution permitted.

Australian radio personality Fidler recounts a trip to Turkey with his son in this surprisingly diverting tome that elucidates the rise and fall of Nova Roma. Specialists will find nothing groundbreaking, and scholarly meticulousness is not Fidler's style, but he's witty and has a knack for delivering unexpected anecdotes. In Fidler's telling, the lives of the saints that so captivated the Eastern Church become action-packed tales of "gifted men and women who could fly through the sky, read minds, and hurl fireballs at demons." Diplomatic history here is more modest but no less entertaining. For instance, the Byzantine princess Theophanu, on wedding Holy Roman Emperor Otto the Younger in 972, introduced new customs to Western nobles; many "saw the fork as a symbol of effete eastern decadence," while for others Theophanu's daily bath proved "controversial, a practice that made her appear pristine and ethereal, compared to the pungent westerners in Otto's court." The book follows the city from its founding as "a mirror of heaven" to its 1453 bombardment by "an artillery device so immensely huge and heavy that a team of sixty oxen and two hundred men were required to haul it." Fidler colors the contours of ancient history while sharing personal reminiscences of his travels with his son. Maps & illus. (Sept.) © Copyright PWxyz, LLC. All rights reserved.

Persisting for a millennium after the fall of Rome, the Eastern Roman Empire, or, more commonly, the Byzantine Empire, has inspired several recent histories, including Thomas Madden's Istanbul: City of Majesty at the Crossroads of the World (2016). Augmenting the trend, Fidler's chronicle loosely follows dynastic successions from Constantine the Great to the final emperor vanquished in the 1453 Turkish conquest of Constantinople. A popular Australian radio personality, Fidler adopts a storytelling style directed at his teenage son. Taking him to modern Istanbul, Fidler interjects their impressions of such lasting Byzantine architecture as the Hagia Sophia, the Hippodrome, or the Theodosian Walls into accounts of the empire's fluctuating fortunes. The reign of Justinian (527-565) stands out, as does that of Heraclius (610-641), to whom fell the defense of the empire against the Arab Islamic onslaught. Alongside territorial expansions and contractions, Fidler strives to evoke Byzantine mysticism, which helped contemporaries cope with momentous events as emperors were crowned or overthrown, battles won or lost. Fidler's accessible approach will especially please readers new to the history of the Byzantine Empire.--Taylor, Gilbert Copyright 2017 Booklist

A history/travel guide about the fabled eastern capital of the Romans.Between Constantinople's founding in 330 to its final siege by the Ottoman Turks in 1453, there were nearly 100 Roman emperors (and several empresses) and a flourishing Roman, Greek, and Christian culture that defied the so-called Dark Ages of Western Europe. In this entertaining survey, Fidler, the host of a popular radio program in Australia, recounts this history through the lens of a recent trip with his 14-year-old son to Istanbul. Alternating between scholarship and travelogue, taking the form of a gentle lecture for the curious, sometimes-skeptical son, the narrative presents a palatable, nondidactic history lesson, providing a sense of how the Turkish culture reigns in the present. While scholars refer to this early era of the city as Byzantium, its inhabitants considered themselves proudly Roman, inheritors of the great, sprawling civilization of Augustus, with Latin as their language until Greek became the lingua franca after the rule of Justinian. While Rome was being sacked by the Visigoths, the eastern capital of Constantinopletwo-thirds of which is surrounded by water, thus enjoying an incomparable strategic advantagewas constructing the great Theodosian Walls around its one land direction, just before Attila the Hun could attack in 447. Indeed, the Muslims trained their conquering eyes on the city numerous times until the eventual conquest by Mehmed II. The author navigates fluidly from the city's founding by Constantine, the first Christian ruler, moving on to the significant rule of Justinianwho commissioned his famous Codex from Roman law, still pertinent in European civil law todayand his strong-willed wife, Theodora, and the construction of the Hagia Sophia. He also covers the schisms, plagues, Crusades, sieges, and the creation of the "deep state" that resonates today under Turkey's current authoritarian prime minister. Fidler provides a palpable sense of this glittering city built as "a mirror of heaven." Copyright Kirkus Reviews, used with permission.
More book reviews at iDreamBooks.com