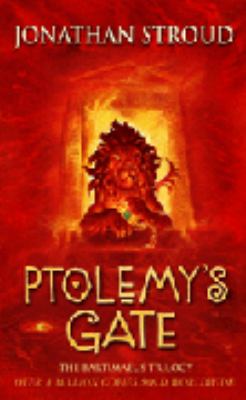 Two years on from the events in THE GOLEMS EYE, the magicians' rule in London is teetering on a knife-edge, with strikes, riots and general unrest. The Prime Minister is largely controlled by two advisors, 17-year-old Nathaniel and the theatrical impresario, Quentin Makepeace. Meanwhile, living under a false identity, Kitty has been researching djinn; she has come to believe that the only way to destroy the magicians is for an alliance of some kind between djinn and ordinary people. Kitty seeks out Bartimaeus and embarks on a terrifying journey into the djinn's chaotic domain - The Other Place - which no human being has ever survived. But even as she does so, Makepeace engineers a dramatic coup d'etat. The outcome is a shattering of the magicians'control and all magical laws are turned upside down. Can Bartimaeus, Nathaniel and Kitty settle old scores if they are to survive and prevent the earth's destruction?

Sequel to: The golem's eye.

Three years have passed since the events of The Golem's Eye, but there's more trouble than ever in the young magician Nathaniel's London. At 17, he's climbed to the highest ranks of the British government but his now-"crippling" workload includes trying to sell an unpopular war in the American wilderness to the commoners who must fight it, and battling terrorist attacks and political corruption on the homefront. There's enough of an explosive plot in this final installment of Stroud's trilogy to fuel several novels. After two years of nonstop service to Nathaniel (known as John Mandrake), Bartimaeus has had it: "Irritable and jaded, with a perpetual itch in my essence that I cannot scratch," is how the djinni puts it. Kitty, the commoner and former Resistance leader, plays the Hermione Granger role of social conscience here: her new mission is to break the bonds that enslave the djinn to the ruling magician elite. The narrative shifts among these three, although as usual, Bartimaeus-even in his melancholy mood-steals the show. (It is an unusual novel whose best lines appear in the footnotes, but the djinni's wisecracking asides continue to be well worth the disruption in narrative flow.) This final volume fills in Bartimaeus's backstory, exposing a vulnerability not seen before, and preparing readers-after a galloping run against imps, Pestilence, Detonations, shields, charms and countercharms-for a potent ending that is at once unexpected and wholly earned. Ages 10-up. (Jan.) (c) Copyright PWxyz, LLC. All rights reserved

Gr 6 Up-The loquacious djinni introduced in Amulet of Samarkand (2003) and Golem's Eye (2004, both Hyperion/Miramax) is back, or, more accurately, he hasn't left in three years. While Bartimaeus retains all of his wit and wisdom, his essence suffers severely from lack of rest. Nathaniel, now Information Minister, spends his time writing propaganda to bolster the common folks' belief that England is winning its foreign wars and tracking down traitors within the government. Kitty Jones has gone into hiding, apprenticing herself to a magician and learning enough from her master and through research to summon Bartimaeus herself. When Nathaniel finds Kitty, the two of them and the djinni must use all their strength and cunning to defeat the most dangerous demons they have yet encountered, demons that take over the bodies of the government magicians. Ptolemy's Gate is an exciting and eminently satisfying conclusion to the trilogy, footnotes and all. This time, readers learn more about Bartimaeus's past and his connection to the loinclothed boy whose likeness he wears. Kitty's strength and intelligence shine through, and Nathaniel's inherent compassion emerges from the mask of John Mandrake. This is a must-have for libraries that purchased the first two books. For those that didn't, buy all three at once for readers who want something that is literate, entertaining, and exciting.- Lisa Prolman, Greenfield Public Library, MA (c) Copyright 2010. Library Journals LLC, a wholly owned subsidiary of Media Source, Inc. No redistribution permitted.

Gr. 6-9. The final volume in the Bartimaeus trilogy reveals more backstory and exposes greater complexity in the characters, even as the plot thunders along toward its colossal climax. The narrative alternates between first-person chapters from the djinni Bartimaeus' point of view to third-person chapters focused on Nathaniel, the magician, and Kitty, the commoner. Although Bartimaeus has lost none of his caustic wit, another side of his character is revealed through scenes in ancient Egypt and in the spirit world. A cabinet minister, Nathaniel sees the traditional power structure crumble around him, feels his own moral compass grow stronger, and takes actions that once would have been impossible for him. Now they seem inevitable. Kitty, after secretly studying magic, takes a challenge that few magicians would have dared: entering the spirit world and returning. Stroud's picture of this alternate world is one of the most remarkable scenes in recent fantasies. It leads readers' imaginations outside the realm of physical reality and offers an awareness of that reality as seen from the outside. For fans of Bartimaeus, Nathaniel, and Kitty, this will be the most satisfying volume of the three, as questions are answered and hidden depths are revealed. For readers who loved the earlier volumes for the sheer adventure, this, with its battles, magic, and great crashing conclusion, will not disappoint. A worthy ending to an exceptional saga. --Carolyn Phelan Copyright 2005 Booklist

(Middle School, High School) This closing installment is the best yet, as the fates of the djinni Bartimaeus, the magician John Mandrake (true name: Nathaniel), and the commoner Kitty Jones grow ever more tightly entwined. The situation in Stroud's alternate-universe London has gone from bad to worse, with an unpopular overseas war draining men and resources; the ruling magicians corrupt; and the populace increasingly desperate. Now in hiding, Kitty is secretly learning all she can about Ptolemy, an ancient-Egyptian scholar whom Bartimaeus served -- and loved -- who aspired to break the cycle of enslavement between spirits and humans. Meanwhile, Bartimaeus, his essence sadly diminished by two years' continual service in the material world, seeks his release; Nathaniel, now a cynical top minister, needs him to investigate a plot to overthrow the government. When the attempted coup goes horribly wrong and powerful demons ravage the city, Nathaniel, Bartimaeus, and Kitty find themselves fighting on the same side -- and, in the case of Bartimaeus and Nathaniel, even in the same body. Stroud is a masterful storyteller, balancing touching sentiment with humor, explosive action scenes with philosophical musings on human nature. He ties up the loose ends from previous installments (the identity of the government traitor, etc.) early on, freeing the book from the usual duties of a wrap-up volume and allowing it considerable momentum and power. Skillfully intertwining the various plot strands, Stroud builds to a thrilling, inventive climax. The final scene manages to take the reader completely by surprise and yet seem, in retrospect, inevitable: a stunning end to a justly acclaimed trilogy. (c) Copyright 2010. The Horn Book, Inc., a wholly owned subsidiary of Media Source, Inc. No redistribution permitted. All rights reserved.

The trilogy wraps up with excitement, adventure and an unexpected wallop of heart and soul. Three years have passed since Bartimaeus told Nathaniel that Kitty was killed by a golem. Nathaniel lives as John Mandrake now, coldly producing government propaganda. Mandrake continues to summon Bartimaeus as a slave-djinni despite the suffering it causes. Commoners (including Kitty, secretly alive) stumblingly rebel against the magicians (politicians). But when a real uprising bursts forth, it takes a shocking form and requires stunning sacrifices and terrifying levels of trust from all three protagonists. Bartimaeus's trademark footnotes are less snarky this time, including those in the chapters about his relationship with Ptolemy in Egypt from 126 to 124 b.c. The djinni, and the rare humans who care, don't solve one profound problem: Magicians get their power from summoning unwilling djinni into slavery. However, Stroud masterfully weaves together four characters and an unearthly realm of existence in an explosive culmination that reaches back to the first two volumes and infuses them with layers of psychological and moral complexity. The volumes in this trilogy should be read in order. (Fantasy. YA) Copyright ©Kirkus Reviews, used with permission.
More book reviews at iDreamBooks.com