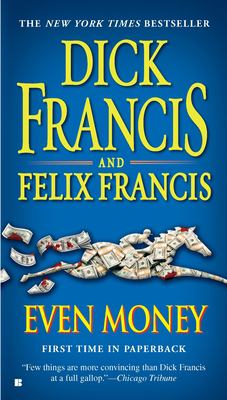 Genre/Form: Detective and mystery fiction.DDC classification: 823/.914 Summary: Ned Talbot, a bookmaker working the Royal Ascot, finds himself in a race to solve his father's stabbing--a race where coming in second could cost him more than even money--it could cost him his life.
Tags from this library: No tags from this library for this title. Log in to add tags.
Fiction notes: Click to open in new window

Ned Talbot is a small-time bookmaker on the edge of giving it all up when his world is turned upside down by a man who claims to be his father, long thought dead. And when the mysterious stranger is murdered, Ned feels compelled to find out exactly what is going on. But the more he discovers, the longer the odds become for his survival.

Ned Talbot, a bookmaker working the Royal Ascot, finds himself in a race to solve his father's stabbing--a race where coming in second could cost him more than even money--it could cost him his life.

This is the third novel coauthored by three-time Edgar Award winner Francis and his son, Felix, following Dead Heat (2007) and Silks (2008), both also available from Books on Tape/Penguin Audio and read by British actor Martin Jarvis. Present are the classic Francis hero (in this case, bookie Ned Talbot), information on modern bookmaking practices, plenty of nasty villains, and, of course, horses. Also present are far too many repetitive descriptions and a major plot line that merely fades away. Still, Jarvis delivers his usual splendid performance, so while this is not Francis at his best, it is still an enjoyable listen. For all mystery collections.-I. Pour-El, Ames Jewish Congregation, IA (c) Copyright 2010. Library Journals LLC, a wholly owned subsidiary of Media Source, Inc. No redistribution permitted.

The third collaboration between bestseller Francis and son Felix (after Silks), a taut crime thriller, features an especially sympathetic hero. Bookmaker Ed Talbot is struggling with his wife's mental illness, even as technology threatens to give the big bookmaking outfits an insurmountable advantage over his small family business. Soon after a man shows up at Ascot and identifies himself as Ed's father, Peter, whom Ed believed long dead, a thug demanding money stabs Peter to death. Ed is in for even more shocks when he learns his father was the prime suspect in his mother's murder-and that Peter's killing, rather than a random act of violence, may be linked to a mysterious electronic device used in some horse-racing fraud. Ed must juggle his amateur investigations into past and present crimes with his demanding family responsibilities. Though some readers may find the ending overly pat, the authors make bookmaking intelligible while easily integrating it into the plot. (Aug.) (c) Copyright PWxyz, LLC. All rights reserved

*Starred Review* Dick Francis moved from a string of detective heroes who were steeplechase jockeys, as he himself once was before he broke his collarbone one too many times, to a wide range of characters somehow connected to the fascinating culture and subcultures of the racetrack: a movie actor, a TV journalist, a horse trader, and, most recently, in last year's Silks, a barrister and amateur jockey. Now Francis, writing with his son, Felix, shines the spotlight on the pariah of the British track the lowly bookie. Ned Talbot, an independent bookmaker, is well aware of the contempt in which even the bettors hold bookies. But his position gives him, as always with Francis heroes, an intriguing perspective on racetrack goings-on. Several of Francis' mysteries open with a death on the track this one begins with one just off the track on the first day of Ascot Races. A man claiming to be the father Ned thought had died in a car crash with his mother long ago accosts Ned at his stand. As they walk to the car park just after the race Ned filled with doubts and anger an attacker stabs his would-be father to death. Ned soon finds himself embroiled in two mysteries, as the police reveal to him that his father has been wanted in the death of Ned's mother for 36 years. And whoever wanted Ned's father removed also wants to kill Ned. Francis again delivers stunning plotting, a vivid setting, and crisp characterization.--Fletcher, Connie Copyright 2009 Booklist

The father-and-son Francis team (Silks, 2008, etc.) turn their attention to the most reviled members of the horse-racing fraternity: on-site bookmakers. "My clients were never my friends," wryly observes Ned Talbot. Of course they aren't, since in the zero-sum game of bookmaking, Ned's earnings depend on their losses. Now someone is changing the rules of that game. Luca Mandini, Ned's assistant, reports that Internet and mobile-phone connections have gone down all over Ascot during crucial minutes when bookmakers have tried to lay off bets against favorites in order to reduce the money they'll have to pay out. More urgently, a stranger who identifies himself as Ned's fathera man his grandparents told him was killed in a car crash 36 years agois killed for good, stabbed to death in front of Ned's eyes an hour after they meet. Peter Talbot leaves his newfound son a disturbing legacy. A rucksack Ned recovers from his father's hotel room is hotly pursued by several unsavory and violent characters. Peter's return from Australia reopens painful questions about the death of his wifequestions whose answers are locked in the Alzheimer's-stricken brain of Ned's aged Nanna. Ned worries that telling his wife Sophia about these latest developments may produce a crisis in her bipolar disorder and condemn her to endless incarceration in the hospital. Meanwhile, a major bookmaker backed by a pair of bullyboys is bent on driving Ned out of business. A blissfully satisfying blend of suspense, revenge and horse-racing info in a multilayered mystery that's presumably Felix Francis's distinctive contribution to his father's legendary series. Copyright Kirkus Reviews, used with permission.
More book reviews at iDreamBooks.com