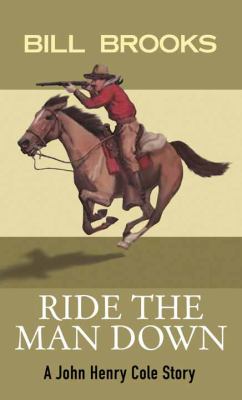 Genre/Form: Detective and mystery fiction. | Western fiction.Summary: John Henry Cole joins forces with Jimmy Wild Bird, head of the Cherokee police force, in the Nations to stop Caddo Pierce and his renegade Creek Indian gang who have been systematically murdering Indian law enforcement officers and their wives and families.
Tags from this library: No tags from this library for this title. Log in to add tags.

John Henry Cole, working as a deputy U.S. marshal out of Judge Isaac Parker's court in Fort Smith, Arkansas, was on assignment in the Indian Nations when he was shot and seriously injured. Now fifteen years later, employed as a deputy for Judge Roy Bean in Texas, Cole receives a personal summons from Judge Parker to appear in his court within thirty days. Cole isn't inclined to go, but he knows whatever's on Judge Parker's mind is serious and decides he has to go.

John Henry Cole joins forces with Jimmy Wild Bird, head of the Cherokee police force, in the Nations to stop Caddo Pierce and his renegade Creek Indian gang who have been systematically murdering Indian law enforcement officers and their wives and families.

The fourth in Brooks' always entertaining John Henry Cole series finds the sometime lawman back in Arkansas, summoned by Judge Isaac Parker to track down a gang of renegades led by the ferocious Caddo Pierce. The gang is running roughshod through the Indian Nations, a forbidding wasteland where Cole was nearly killed 15 years ago. But the Nations is also home to Anna Rain, Cole's first love, now married to a marshal, Jimmy Wild Bird. So Cole accepts the judge's offer and returns to the Nations, hoping to rekindle something with Anna while helping her husband track Caddo and his gang. That's what happens, more or less, but not without plenty of ambiguity on the personal front and bloodletting on the job. Among his many attributes as a western writer, Brooks describes violence unflinchingly, attentive not only to the archetypal conflict of the gun battle but also to the ugliness of its aftermath, as innards seep from dying bodies. Unlike many of his peers, Brooks is equally good with human relationships on the frontier, their inevitable transience as well as their embattled passion. Fine work in the western tradition.--Ott, Bill Copyright 2010 Booklist
More book reviews at iDreamBooks.com