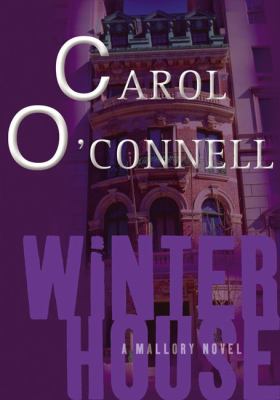 Genre/Form: Detective and mystery fiction. | Thrillers (Fiction)DDC classification: 813/.54 Subject: When a serial lady-killer is found dead, Kathy Mallory and Detective Sergeant Riker are called in to investigate. An elderly female resident of Winter House confesses, but Winter House is the site of a 60-year-old massacre and doesn't give up its dead so easily.
Tags from this library: No tags from this library for this title. Log in to add tags.
Fiction notes: Click to open in new window

Carol O'Connell's last novel, Dead Famous, made multiple best-of-year lists and won critical acclaim nationwide. "O'Connell brings a hard edge of greatness to the crime thriller," wrote the San Jose Mercury News. "A tough and brilliant action-, wit-, and surprise-packed novel." But never has Mallory faced as many surprises as in the case before her now. It seems cut-and-dried at first: a burglar has been caught in the act and killed by an ice pick-wielding home owner. Except that the home owner turns out to be the most famous lost child in NYPD history, missing for almost sixty years, thought to have been kidnapped following the massacre of her family: five siblings, father, stepmother, nanny, and housekeeper -nearly the entire household wiped out . . . with an ice pick. Filled with the intricate plotting and extraordinary characterization that are O'Connell's hallmarks, Winter Houseis her most powerful-and most astonishing-novel yet.

When a serial lady-killer is found dead, Kathy Mallory and Detective Sergeant Riker are called in to investigate. An elderly female resident of Winter House confesses, but Winter House is the site of a 60-year-old massacre and doesn't give up its dead so easily.

An ice pick is the murder weapon of choice in O'Connell's new noir featuring glacier-cool detective Kathy Mallory. A former homeless child-thief adopted by a kind-hearted New York cop, Mallory has parlayed her familiarity with the shady side of society into a successful-if somewhat unorthodox-career as a sleuth (she picks complex locks with aplomb and her investigative methods flirt with the limits of the law). When Nedda Winter, missing for 58 years following the massacre of her family at their New York mansion, reappears at the scene of the crime-now the site of a brand-new homicide-Mallory ("[s]till feral in many ways") digs her red lacquered nails right into the case. Cleo and Lionel Winter are mystified by their sister Nedda's return, certain they were the only survivors of the long-ago stabbing rampage. Mallory, working alongside sartorially challenged homicide detective Riker and psychologist Charles Butler, suspects the reason lies with Cleo's ex-husband, Sheldon Smyth, a slick estate lawyer with exclusive access to the Winter family's multimillion-dollar trust. But Smyth's dubious deeds are just the tip of the ice pick in the hands of O'Connell, known for her idiosyncratic characters and labyrinthine plots in eight previous thrillers including Mallory's Oracle and Dead Famous. Vivid prose keeps the pages turning in this intricate tale of betrayal, buried secrets and lives chopped short in the name of greed. (Oct.) (c) Copyright PWxyz, LLC. All rights reserved

The eighth entry in O'Connell's popular Kathy Mallory series feels strangely like an English country house shocker dropped into manic Manhattan. An intruder in a grand old mansion on Central Park West is fatally stabbed by Nedda Winter with a pair of scissors--or was it an ice pick, the very weapon used to massacre most of Nedda's family 60 years ago? The burglar turns out to be a serial killer caught by Mallory and inexplicably released on bail, impelling our poker-faced heroine to slam through the proceedings like very bad news, stirring up a gaggle of oddballs such as Bitty Smyth, Nedda's elfin niece whose dead-bolted room houses two shrines: one to God and one to genius, and series regular Charles Butler. Detective Riker, another regular, also takes a turn as an ice-pick murder buff. The individual stories are not very compelling, giving this walk-in closet full of enervated skeletons an air of unreality. Mallory fans and puzzle enthusiasts should appreciate the convoluted plot, but the title doesn't stand well on its own. --David Wright Copyright 2004 Booklist
More book reviews at iDreamBooks.com