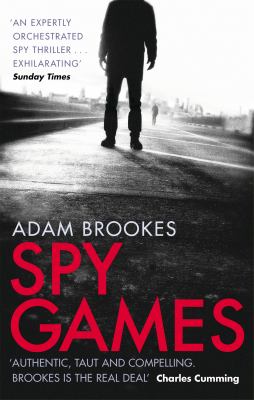 Fearing for his life, journalist Philip Mangan has gone into hiding from the Chinese agents who have identified him as a British spy. His reputation and life are in tatters. But when he is caught in a terrorist attack in East Africa and a shadowy Chinese figure approaches him in the dead of night with information on the origins of the atrocity, Mangan is suddenly back in the eye of the storm.

Meanwhile, thousands of miles away on a humid Hong Kong night, a key MI6 source is murdered minutes after meeting spy Trish Patterson. From Washington, D.C. to the hallowed halls of Oxford University and dusty African streets, a sinister power is stirring that will use Mangan and Patterson as its pawns - if they survive.

Brookes's critically acclaimed Night Heron introduced journalist Philip -Mangan, who became entangled in a British Secret Intelligence Service (SIS) operation and barely made it out of China alive. Now a Chinese colonel appears on the scene, insisting on Mangan as his contact. The agent brings valuable information about the tangled, virtually invisible infighting among China's elite. Working with his British handler from SIS, Mangan is drawn back into a world of betrayal, risk, and disillusionment. -VERDICT The East African and Hong Kong settings are intriguing and the shocking ending highlights how little room there is for loyalty or traditional values in the murky world of covert action. After a slow start, this novel picks up steam, and readers won't be able to put it down. [See Prepub Alert, 2/1/15.]-DK © Copyright 2015. Library Journals LLC, a wholly owned subsidiary of Media Source, Inc. No redistribution permitted.

Brookes's intricately plotted sequel to 2014's Night Heron finds Philip Mangan, foreign correspondent and part-time spy, in Ethiopia looking into a story about how the Chinese are influencing African politics. Shortly after he's almost killed in a cafe bombing, Mangan receives secret intelligence information from a Chinese traitor. When he turns this over to the U.K.'s Secret Intelligence Service, the SIS welcomes Mangan's help, and he's given new training and the job of running the valuable Chinese agent. At first the operation goes well, with Mangan getting info on a secret fighter aircraft and new laser weapons, but infighting among the leaders of the Chinese government, a flurry of double and triple crosses, and perfidy among those he considers friends lead to disaster. The not always convincing conflict between competing Chinese factions slows the action in places, but Brookes shows that his impressive debut was no fluke, and readers will look forward to Mangan's next adventure. Agent: Catherine Clarke, Felicity Bryan Associates. (July) © Copyright PWxyz, LLC. All rights reserved.
More book reviews at iDreamBooks.com