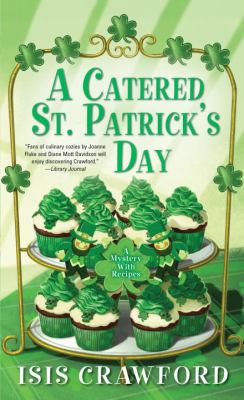 Genre/Form: Detective and mystery fiction.DDC classification: 813/.6 Summary: When Mike Sweeney is found floating in a vat of green beer and the nephew of one of their best customers is accused of the crime, Bernie and Libby Simmons, the owners of A Little Taste of Heaven, must find the real killer.
Tags from this library: No tags from this library for this title. Log in to add tags.
Fiction notes: Click to open in new window

To most of the people of Longely, New York, St. Paddy's Day means good food, great music, and plenty of Guinness. But when the lifeless body of Mike Sweeney floats to the top of a vat of green beer, it looks like the luck o' the Irish has just run out. Unfortunately for the Simmons sisters, Bernie and Libby, the number one suspect is related to one of their very best catering customers, the pampered and powerful Bree Nottingham. When Bree visits A Little Taste of Heaven to beseech them to clear her nephew's name, they just can't say no.

But the more information Bernie and Libby stir up, the more Duncan Nottingham looks like a killer. For Bernie and Libby, the situation is deadly and in danger of boiling over. And they can't count on good old Saint Pat to drive out the snake in their midst. . .they'll have to do it themselves, before a murderer strikes again.

Includes Original Recipes for You to Try!

"A mystery with recipes."

When Mike Sweeney is found floating in a vat of green beer and the nephew of one of their best customers is accused of the crime, Bernie and Libby Simmons, the owners of A Little Taste of Heaven, must find the real killer.

In the eighth delectable visit (after A Catered Thanksgiving) from sisters Bernie and Libby, a dead body in the beer vat doesn't bode well. (c) Copyright 2012. Library Journals LLC, a wholly owned subsidiary of Media Source, Inc. No redistribution permitted.

Murder once again interrupts a holiday in Crawford's diverting eighth mystery featuring sisters Bernie and Libby Simmons, the owners of A Little Taste of Heaven, a catering business in Longely, N.Y. As Bernie and Libby are preparing St. Patrick's Day goodies one morning, an urgent call from Bernie's boyfriend, Brandon, summons them to the bar he runs, RJ's. There, Brandon shows the sisters a body floating in a large keg of green beer. The deceased, Mike Sweeney, was a member of the Corned Beef and Cabbage Club, which had been meeting at RJ's. Could a drunken Mike have fallen in and drowned? When the nephew of "real estate agent extraordinaire" Bree Nottingham is arrested for Mike's murder two weeks later, Bree asks Bernie and Libby for help in proving her nephew's innocence. Cozy fans will appreciate the zany characters, witty dialogue, and puzzling plot. Agent: Evan Marshall. (Feb.) (c) Copyright PWxyz, LLC. All rights reserved.