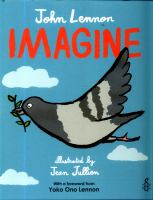 DDC classification: 823.92 Summary: Join one litlle pigeon as she sets out on a global journey to spread a message of peace and friendship among birds from around the world, of all shapes and sizes.
Total holds: 0

'Never have we all, child and grown-up child, needed this more, the words and the song in our hearts, lifting our spirits, giving us hope, and determination too to find the road to understanding, conciliation and peace.' - MICHAEL MORPURGO<br> <br> ​'Imagine is a very powerful statement, written with an incredible deep love for humanity and its future' - YOKO ONO LENNON<br> <br> 'lovely to read to your child during these troubled times' - THE SUN, Children's Book of the Week <br> <br> Join one little pigeon on her mission to spread the word of peace around the world. Set to the lyrics the iconic song Imagine, this book brings John Lennon's enduring message of peace and tolerance to a new generation. A royalty from every copy sold will go to charity Amnesty International.

With a foreword from Yoko Ono Lennon.

Join one litlle pigeon as she sets out on a global journey to spread a message of peace and friendship among birds from around the world, of all shapes and sizes.

Published in partnership with Amnesty International, this interpretation of Lennon's soulful anthem follows a determined, eager-eyed pigeon-a personable and quirky take on the proverbial dove-around the world as it distributes olive branches and makes peace among its feathered friends. Jullien (Before & After) focuses on sharing and fairness in his brightly colored images, a smart choice given what's important to the target audience. The lyrics "Nothing to kill or die for,/ and no religion too" and "No need for greed or hunger/ A brotherhood of man," for example, find the pigeon persuading pairs of gulls and hummingbirds that they needn't fight over a food source. In the final pages, the pigeon sprawls wearily on a branch, exhausted from its efforts, and is suddenly joined by all of the birds introduced in the previous pages-an avian twist on the idea that peace takes a village. For fans of Lennon's song eager to introduce it to a new generation, Jullien's panoply of boldly outlined, lovable birds offers an accessible entry point to ideas of peace, kindness, and justice. Ages 4-7. (Sept.) © Copyright PWxyz, LLC. All rights reserved.

PreS-Gr 2-Jullien introduces a new generation to Lennon's anthem for peace. Accompanied by text from "Imagine," vibrant images depict an intrepid pigeon flying about the city and delivering olive branches to encourage harmony. Large, flat, and thick-lined, the naive-style illustrations convey the enduring message of the song in a format that will resonate with a young audience. For example, a pair of seagulls squabbling over a fish ("Nothing to kill or die for,/and no religion too") begin smiling after the pigeon gives them a branch ("Imagine all the people/living life in peace"): a simple-and adorable-way to demonstrate the power to overcome discord. Later, the pigeon snoozes in a tree ("You may say I'm a dreamer") as other birds, touched by the pigeon's actions, fly by carrying branches of their own ("but I'm not the only one"). A colorful spread of the pigeon draping his wings around other birds emphasizes the overall message: "I hope someday you'll join us/and the world will live as one." VERDICT Adults will enjoy this creative take on a beloved song, and the book can easily blend with lessons about cooperation and sharing-and even age-appropriate lessons on global conflicts.-Mahnaz Dar, School Library Journal © Copyright 2017. Library Journals LLC, a wholly owned subsidiary of Media Source, Inc. No redistribution permitted.

Foreword by Yoko Ono Lennon. As a pigeon travels the world--by subway, boat, and sky--it distributes leafy olive branches that have a salvific effect on fellow birds. The pigeon--a bluntly rendered gray figure set against bold colors--is an inspired stand-in for the "dreamer" in Lennon's iconic anthem, which harbors the kid-friendly message that achieving peace starts with setting one's mind to it. (c) Copyright 2018. The Horn Book, Inc., a wholly owned subsidiary of Media Source, Inc. No redistribution permitted.

In this illustrated version of the lyrics of Lennon's 1971 song "Imagine," a pigeon carries its message far and wide.Traveling from a crowded subway platform and flying over a river, the pigeon with a mission encourages readers to imagine a world without heaven or hell, without countries, without anything to kill or die for, without religion, possessions, greed, or hunger. Appropriately equipped with an olive branch and orange messenger bag sporting the iconic peace symbol, the pigeon intervenes when two sea gulls fight over a fish and two hummingbirds squabble over a flower. Surrounded by birds of different colors, shapes, and sizes, the pigeon asks them to imagine living in peace and brotherhood. They may think he's a dreamer, but he's not alone and suggests they join with him so the "world will be as one." The visual device of the pacifist carrier pigeon spreading peace gives tangible form to Lennon's intangible aspirations. Executed in boldly brushed ink lines and digitally colored in an arresting palette of blues, grays, and whites with strong pops of red, orange, chartreuse, and purple, the strikingly simple illustrations reinforce the simple, powerful text. An inviting, relevant, and timely message of tolerance, inclusiveness, unity, and peace. Just imagine. (foreword by Yoko Ono Lennon, afterword) (Picture book. 4-8) Copyright Kirkus Reviews, used with permission.