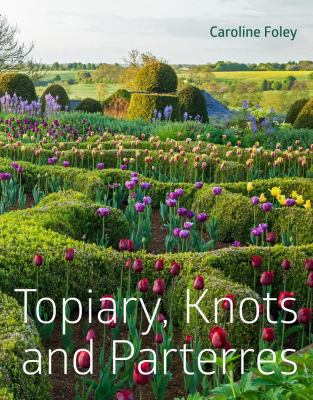 DDC classification: 715.1
Contents:
The patrician gardens of Rome, AD 79-476 -- Byzantium and the Paradise Garden, AD 395-1453 -- Medieval Europe and the Hurtus Conclusus, 5th-15th centuries -- The Italian renaissance: humanism, the high renaissance and mannerism, 15th-17th centuries -- The French renaissance, 15th-17th centuries -- Britain: the Tudors and Stuarts, 1509-1613 -- War in Europe and the Dutch golden age, 1613-1702 -- The swan song of the formal garden: England in the 18th century -- The Victorian garden: England in the 19th century -- The arts and crafts movement: the late 19th and early 20th centuries -- Summing up: into the 21st century.
Summary: "Topiary, knots, and parterres come in many guises, from the grand and imposing to the humble and folksy. In this book Caroline Foley -- with the aid of diarists, writers, wits, designers, gardeners, and garden owners -- traces their story through the centuries and across the world"--Jacket flap.
Tags from this library: No tags from this library for this title. Log in to add tags.

Topiary, knots and parterres come in many guises, from the grand and imposing to the humble and folksy. In this book Caroline Foley - with the aid of diarists, writers, wits, designers, gardeners and garden owners - traces their story through the centuries and across the world. Starting from the topiary of patrician Rome, she moves through the paradise gardens of Islam and the medieval hortus conclusus to the formal parterres of Renaissance Italy, the more elaborate broderies of the royal French gardens, the complicated conceits of the Tudors and the geometry of the Dutch school. She takes a wry look at the eighteenth century, when many fine formal gardens were scrapped in favour of the English landscape movement (which, in fact, was no less artificial). In the nineteenth century there was a revival of parterres filled with tender bedding plants. Green architecture returned with the Arts and Crafts movement, and the twentieth century saw a joyful resurgence of the topiary peacock and other such conceits, the arrival of the Japanese minimalist school, the cult of the venerable sagging hedge, cloud pruning and the emergence of the cool crisp lines of modernism. German perennial planting, juxtaposed with sharply cut linear hedges, has provided a clever solution to the modern requirements of high style, low maintenance and attention to the environment and to labour costs. Of late a new type of formality has emerged among designers and landscape architects, involving wild-looking prairie planting set off by large-scale sculptural topiary. As Caroline Foley points out, 'Serious or frivolous ...topiary always has character and presence. While wonderfully impressive when it takes the form of an immaculate battlemented bastion, it has poetry and possibly even greater charm when it is overblown and blowsy with age. Either way, it will always be a win-win proposition.'

"Topiary, knots, and parterres come in many guises, from the grand and imposing to the humble and folksy. In this book Caroline Foley -- with the aid of diarists, writers, wits, designers, gardeners, and garden owners -- traces their story through the centuries and across the world"--Jacket flap.

Author (Of Cabbages and Kings) and editor (European Boxwood and Topiary Society's Topiarius) Foley aims to disabuse readers of the notion that topiary, the art of shaping plants and shrubs, is a lofty, mysterious technique. She leads readers on an entertaining romp through gardens from ancient Rome to the present, showcasing topiary's versatility and practicality in examples drawn from four continents. Thoroughly researched, this book incorporates literary references, poetry, and inspiring illustrations to demonstrate the tenacity of topiary. Going in and out of fashion over two millennia, the craft seems to reemerge when some culture or famous garden designer takes a fresh approach. Chronologically organized chapters highlight the major trends in topiary and discuss how gardeners were influenced by larger trends in society, politics, and religion. Readers learn about sublime French royal parterres as well as amusing American figurative topiary. A helpful glossary and bibliography for further reading are included. Inspired readers will concede topiary is an inexpensive way to create plain backdrops, play with decorative shapes, and improve fruiting, but practical books such as Jake Hobson's The Art of Creative Pruning will help them acquire the basic skills. VERDICT Highly recommended for anyone interested in the fascinating history of topiary or gardening.-Bonnie Poquette, Milwaukee © Copyright 2017. Library Journals LLC, a wholly owned subsidiary of Media Source, Inc. No redistribution permitted.
More book reviews at iDreamBooks.com