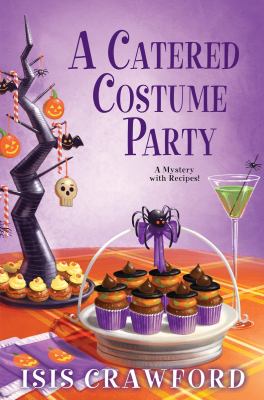 A catered costume party : a mystery with recipes / Isis Crawford.

DDC classification: 813/.6 Summary: When Darius Witherspoon hires them to cater a costume party in honor of his missing wife, Bernie and Libby arrive at the haunted Berkshire Arms only to find out that murder is on the menu when Darius is found hanging from a noose during the festivities.
Tags from this library: No tags from this library for this title. Log in to add tags.
Fiction notes: Click to open in new window
Total holds: 0

When sisters Bernie and Libby Simmons agree to cater an extravagant Halloween party in their little upstate New York town of Longely, they figured a ghost or two and a blood curdling scream might be part of the menu, but they never expected to be haunted by the deadly specter of murder . . . <br> <br> Halloween is coming, and Darius Witherspoon isn't giving up on his plan for a catered costume party-despite the recent disappearance of his wife, Penelope. He may be heartbroken, but perhaps throwing a big shindig in her honor will boost his spirits. He's going to hold it at his stylish new co-op apartment at the Berkshire Arms, where the couple had dreamed of moving in.<br> <br> Darius hires Bernie and Libby to provide the treats. They'd prefer to avoid the festivities altogether. As far as they're concerned, the Berkshire Arms is a haunted house-or at least haunted by the memory of the murder that happened on the site, when it used to be The Peabody School. But as always, there are bills to be paid, so they accept the job. And in the midst of the celebration, Darius is discovered hanging from a noose outside one of the ballroom's French doors . . .<br> <br> Was it suicide, induced by despair over his missing spouse? Bernie and Libby think not, once they read the note he left-which includes a sum of money and a request for them to "do something" if anything should happen to him. Now, once the serving trays have been cleared and the decorations taken down, it's time for the sisters to unmask a killer . . .<br> <br> Includes Original Recipes for You to Try!

When Darius Witherspoon hires them to cater a costume party in honor of his missing wife, Bernie and Libby arrive at the haunted Berkshire Arms only to find out that murder is on the menu when Darius is found hanging from a noose during the festivities.

In Crawford's charming 13th culinary mystery featuring the Simmons sisters (after 2016's Catered Tea Party), Bernie (fearless on stilettos and creaky balconies) strong-arms Libby (secret zodiac believer and weight-worrier) into catering Darius Witherspoon's Halloween gala at the posh Berkshire Arms in their hometown of Longley, N.Y., despite nightmare memories of a gig there when it was the Peabody School and an alum's head rolled down the steps. Darius's wife, Penelope, disappears ominously, but she loves Halloween, so he says the party's on-and then makes his entrance crashing through a window, hanged. The sisters' nemesis, police chief Lucy Broadbent, calls it an accident, but Bernie and Libby smell murder. When Penelope is also discovered freshly hanged, the sisters risk their own necks to discover who killed whom when. Recurring characters, especially the sisters' widowed father, retired police chief Sean, add depth and humor. Agent: Evan Marshall, Evan Marshall Agency. (Sept.) © Copyright PWxyz, LLC. All rights reserved.

Sisters Libby and Bernie Simmons, owners of the catering business A Little Taste of Heaven, reluctantly agree to cater failed treasure hunter Darius Witherspoon's Halloween party at the spooky Berkshire Arms, formerly the tragedy-ridden Peabody School. They are puzzled when Darius leaves an envelope with them the day of the party, to be opened if he does not return for it. During the party, everyone is stunned to see Darius with a rope around his neck, hanging from his apartment window. When the sisters open the envelope, they find $5,000 and a letter asking them to investigate his death, which is officially ruled a suicide or a party stunt gone wrong. Keeping one step ahead of chief of police Lucas Broadbent, who sees the sisters as a perennial thorn in his side, Libby and Bernie unravel the truth by interviewing Darius' angry investors, his business partner, and the owner of the Berkshire Arms. The close relationship between the two very different sisters is reminiscent of that between the similar siblings in Chris Cavender's Pizza Lover's mysteries.--O'Brien, Sue Copyright 2017 Booklist
More book reviews at iDreamBooks.com