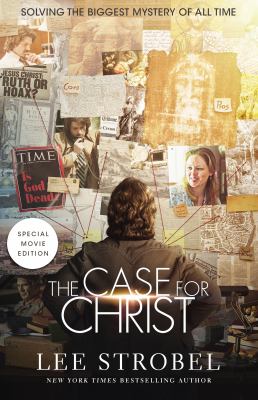 The case for Christ : solving the biggest mystery of all time / Lee Strobel.

Is there credible evidence that Jesus of Nazareth really is the Son of God?

Now a major motion picture, Case for Christ, Strobel retraces his own spiritual journey from atheism and former legal editor of the Chicago Tribune to faith. Strobel cross-examines a dozen experts with doctorates from schools like Cambridge, Princeton, and Brandeis who are recognized authorities in their own fields. He challenges them with questions like, how reliable is the New Testament? Does evidence for Jesus exist outside the Bible? Is there any reason to believe the resurrection was an actual event?

Strobel's tough, point-blank questions read like a captivating, fast-paced novel. But it's not fiction. It's a riveting quest for the truth about history's most compelling figure.

The new edition includes scores of revisions and additions, including updated material on archaeological and manuscript discoveries, fresh recommendations for further study, and an interview with the author that tells dramatic stories about the book's impact, provides behind-the-scenes information, and responds to critiques of the book by skeptics. As The Case for Christ and its ancillary resources approach 10 million copies in print, this updated edition will prove even more valuable to contemporary readers.