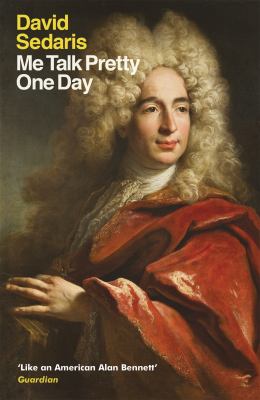 Genre/Form: Autobiographies.DDC classification: 818.5409 Awards: Lambda Literary Award, 2000Summary: David Sedaris moved from New York to Paris where he attempted to learn French. His teacher, a sadist, declared that every day spent with him was like giving birth the Caesarean way! These hilarious essays were inspired by that move.
Tags from this library: No tags from this library for this title. Log in to add tags.
Fiction notes: Click to open in new window

A hilarious collection of essays from 'the premier observer of our world and its weirdnesses,' New York Times bestselling author David Sedaris (Adam Kay, author of This is Going to Hurt )


Anyone who has heard David Sedaris speaking live or on the radio will tell you that a collection from him is cause for jubilation. A move to Paris from New York inspired these hilarious pieces, including 'Me Talk Pretty One Day', about his attempts to learn French from a sadistic teacher who declares that 'every day spent with you is like having a caesarean section'.

His family is another inspiration. 'You Can't Kill the Rooster' is a portrait of his brother, who talks incessant hip-hop slang to his bewildered father. And no one hones a finer fury in response to such modern annoyances as restaurant meals presented in ludicrous towers of food and cashiers with six-inch fingernails.

'Fantastically funny book which gets better and better'

'Oh how I loved this book. David Sedaris and his adventures in learning to speak French made me cry with laughter , especially the terrifying teacher at the language classes'

'Why have I not discovered him before'

David Sedaris moved from New York to Paris where he attempted to learn French. His teacher, a sadist, declared that every day spent with him was like giving birth the Caesarean way! These hilarious essays were inspired by that move.

Sedaris is Garrison Keillor's evil twin: like the Minnesota humorist, Sedaris (Naked) focuses on the icy patches that mar life's sidewalk, though the ice in his work is much more slippery and the falls much more spectacularly funny than in Keillor's. Many of the 27 short essays collected here (which appeared originally in the New Yorker, Esquire and elsewhere) deal with his father, Lou, to whom the book is dedicated. Lou is a micromanager who tries to get his uninterested children to form a jazz combo and, when that fails, insists on boosting David's career as a performance artist by heckling him from the audience. Sedaris suggests that his father's punishment for being overly involved in his kids' artistic lives is David's brother Paul, otherwise known as "The Rooster," a half-literate miscreant whose language is outrageously profane. Sedaris also writes here about the time he spent in France and the difficulty of learning another language. After several extended stays in a little Norman village and in Paris, Sedaris had progressed, he observes, "from speaking like an evil baby to speaking like a hillbilly. `Is thems the thoughts of cows?' I'd ask the butcher, pointing to the calves' brains displayed in the front window." But in English, Sedaris is nothing if not nimble: in one essay he goes from his cat's cremation to his mother's in a way that somehow manages to remain reverent to both of the departed. "Reliable sources" have told Sedaris that he has "tended to exhaust people," and true to form, he will exhaust readers of this new book, tooDwith helpless laughter. 16-city author tour. (June) (c) Copyright PWxyz, LLC. All rights reserved

Sedaris' great gift is in taking the minor embarrassments of everyday life and hyperbolizing them until they puff up into fluffy soufflés of wit, misanthropy, and mortification. In his previous essay collection, Naked (1997), Sedaris cooked up stories about his childhood in suburban North Carolina as a gay, sheltered adolescent with an overly active imagination. This one starts with his time as an artist in New York, then shifts to his new life in France, where he lives with his boyfriend, Hugh. Sedaris' irony always cuts deepest when he's writing as a complete outsider, and it's the French pieces where his humor is most honed. Taking French language classes, he fails at even the most commonplace interactions, and feels like a failure in the eyes of his strict teacher, who tells him, Every day spent with you is like having a cesarean section. There are big laughs here, and with each one Sedaris elicits from his readers, he proves that his gifts transcend his early material and that his humiliation is hilarious in any language.--Eberle, Jerry Copyright 2008 Booklist

The undisputed champion of the self-conscious and the self-deprecating returns with yet more autobiographical gems from his apparently inexhaustible cache (Naked, 1997, etc.). Sedaris at first mines what may be the most idiosyncratic, if innocuous, childhood since the McCourt clan. Here is father Lou, who's propositioned, via phone, by married family friend Mrs. Midland ("Oh, Lou. It just feels so good to . . . talk to someone who really . . . understands"). Only years later is it divulged that "Mrs. Midland" was impersonated by Lou's 12-year-old daughter Amy. (Lou, to the prankster's relief, always politely declined Mrs. Midland's overtures.) Meanwhile, Mrs. Sedaris--soon after she's put a beloved sick cat to sleep--is terrorized by bogus reports of a "miraculous new cure for feline leukemia," all orchestrated by her bitter children. Brilliant evildoing in this family is not unique to the author. Sedaris (also an essayist on National Public Radio) approaches comic preeminence as he details his futile attempts, as an adult, to learn the French language. Having moved to Paris, he enrolls in French class and struggles endlessly with the logic in assigning inanimate objects a gender ("Why refer to Lady Flesh Wound or Good Sir Dishrag when these things could never live up to all that their sex implied?"). After months of this, Sedaris finds that the first French-spoken sentiment he's fully understood has been directed to him by his sadistic teacher: "Every day spent with you is like having a cesarean section." Among these misadventures, Sedaris catalogs his many bugaboos: the cigarette ban in New York restaurants ("I'm always searching the menu in hope that some courageous young chef has finally recognized tobacco as a vegetable"); the appending of company Web addresses to television commercials ("Who really wants to know more about Procter & Gamble?"); and a scatological dilemma that would likely remain taboo in most households. Naughty good fun from an impossibly sardonic rogue, quickly rising to Twainian stature. Copyright ©Kirkus Reviews, used with permission.
More book reviews at iDreamBooks.com