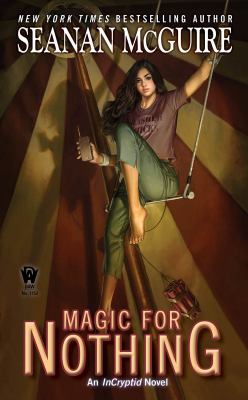 Magic for nothing / Seanan McGuire.

DDC classification: 813/.6 Summary: "As the youngest of the three Price children, Antimony is used to people not expecting much from her. Annie's expectations keep getting shattered. She didn't expect Verity to declare war on the Covenant of St. George on live television. She didn't expect the Covenant to take her sister's threat seriously. And she definitely didn't expect to be packed off to London to infiltrate the Covenant from the inside ... --Publisher's description.
Tags from this library: No tags from this library for this title. Log in to add tags.
Total holds: 0

The sixth book in New York Times -bestselling Seanan McGuire's witty urban fantasy InCryptid series about a family of cryptozoologists who act as a buffer between humans and the magical creatures living in secret around us.<br> <br> "The only thing more fun than an October Daye book is an InCryptid book." -- Charlaine Harris , #1 New York Times -bestselling author of Sookie Stackhouse series<br> <br> Improbable, adjective: <br> 1. Not very likely to happen; not probable.<br> 2. Probably not a very good idea anyway.<br> 3. See also "bad plan."<br> <br> As the youngest of the three Price children, Antimony is used to people not expecting much from her. She's been happy playing roller derby and hanging out with her cousins, leaving the globe-trotting to her older siblings while she stays at home and tries to decide what she wants to do with her life. She always knew that one day, things would have to change. She didn't think they'd change so fast.<br> <br> Annie's expectations keep getting shattered. She didn't expect Verity to declare war on the Covenant of St. George on live television. She didn't expect the Covenant to take her sister's threat seriously. And she definitely didn't expect to be packed off to London to infiltrate the Covenant from the inside...but as the only Price in her generation without a strong resemblance to the rest of the family, she's the perfect choice to play spy. They need to know what's coming. Their lives may depend on it.<br> <br> But Annie has some secrets of her own, like the fact that she's started setting things on fire when she touches them, and has no idea how to control it. Now she's headed halfway around the world, into the den of the enemy, where blowing her cover could get her killed. She's pretty sure things can't get much worse.<br> <br> Antimony Price is about to learn just how wrong it's possible for one cryptozoologist to be.

Antimony Price, the youngest of her family of cryptozoologists, is still figuring out her life as she tries to contain her new, secret incendiary power. After her older sister, -Verity, basically declares war against their enemy, St. George of the Covenant, on live television, Annie is asked by the family to travel to London and infiltrate the Covenant. She must find out if the organization is taking Verity's declaration seriously and planning to respond in kind. This is a life-or-death mission; if the Covenant discovers who Annie is, if they realize that she wants to protect most of the Cryptids, if they uncover her secret, they will certainly kill her-or worse. Because there is always a "worse." VERDICT The sixth series outing (after Chaos Choreography) returns fans to the supernatural world of monsters, monster hunters, and Price family issues. McGuire continues to keep the high energy and excitement in her frenetic action-filled stories, with loads of humor and intriguing characters.-KC © Copyright 2017. Library Journals LLC, a wholly owned subsidiary of Media Source, Inc. No redistribution permitted.
More book reviews at iDreamBooks.com