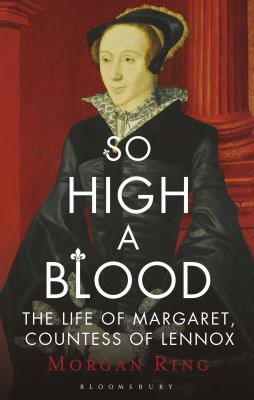 So high a blood : the life of Margaret, Countess of Lennox / Morgan Ring.

DDC classification: 942.052092 | B Summary: Morgan Ring has revived the story of Lady Margaret Douglas to vivid effect. From a detailed backdrop of political and religious turbulence Margaret emerges, full of resilience, grace and intelligence. Drawing on previously unexamined archival sources, 'So High a Blood' presents an authoritative portrait of a woman with the greatest of ambitions for her family, her faith and her country.
Tags from this library: No tags from this library for this title. Log in to add tags.
Fiction notes: Click to open in new window

Sometime heir to the English throne, courtier in danger of losing her head, spy-mistress and would-be architect of a united Catholic Britain- Lady Margaret Douglas is the Tudor who survived and triumphed but at a terrible cost.
Niece to Henry VIII and half-sister to James V of Scotland, the beautiful and Catholic Margaret held a unique position in the English court. Throughout her life, she was to navigate treacherous waters- survival demanded it. Yet Margaret was no passive pawn. As the Protestant Reformations unfolded across the British Isles, she had ambitions of her own- to see her family rule a united, Catholic Britain. When her niece Mary, Queen of Scots was widowed, Margaret saw her chance. Thoroughly Machiavellian, she set in motion a chain of events that would see her descendants succeed to the crowns of England, Ireland and Scotland.
Drawing on previously unexamined archival sources, So High a Blood revives the story of Lady Margaret Douglas to vivid and captivating effect.

Morgan Ring has revived the story of Lady Margaret Douglas to vivid effect. From a detailed backdrop of political and religious turbulence Margaret emerges, full of resilience, grace and intelligence. Drawing on previously unexamined archival sources, 'So High a Blood' presents an authoritative portrait of a woman with the greatest of ambitions for her family, her faith and her country.

In her debut, Ring (history, Cambridge Univ.) delivers a comprehensive biography of the niece of one of England's most notorious monarchs, King Henry VIII. While overshadowed by her famous relatives and the political events of the time, Margaret Douglas (1515-78) rose from her abandonment by her mother, Margaret Tudor, to follow her own ambitions, as well as those of her children and grandchildren, risking her own safety in the process. The author compiles a plethora of research, including contemporary sources, to reveal Douglas's integral role in the Tudor and Stuart dynasties. Alison Weir's The Lost Tudor Princess became the first biography on the royal, and this new study serves as another excellent contribution, perhaps leading to a trend of interest in Douglas. VERDICT Recommended for readers of Tudor history, and the women who made their mark during the era. In addition to the many intriguing stories here, readers will enjoy Ring's ability to put them together into a captivating narrative.-Katie McGaha, County of Los Angeles P.L. © Copyright 2017. Library Journals LLC, a wholly owned subsidiary of Media Source, Inc. No redistribution permitted.

In this quick-paced overview, Ring, a doctoral candidate in history at Cambridge, depicts a determined Tudor family survivor who eschewed tranquility in favor of scheming for the thrones of England and Scotland. Margaret Douglas's calculated maneuvering resulted in the marriage between her son, Lord Darnley, and Mary, Queen of Scots, and the succession of their son, James VI of Scotland (and I of England). Ring intends to rescue Margaret from the popular role of overbearing mother to her "spoiled" son, but she provides little textual support for her claims. Mary, Queen of Scots, appears as a lightly drawn figure with hazy motives and Darnley seems almost an afterthought. The relationships between Margaret and the reigning Tudors takes center stage, especially the rash romantic entanglements and shifting court alliances. Still, it's hard to sense Margaret's charisma and the strategic abilities that allowed her to remain a claimant while repeatedly switching alliances as her family's needs changed. Interestingly, Ring successfully argues that Margaret's strong midlife adherence to Catholicism-after years of remaining privately Catholic-derived from the needs of her children, both living and buried. Ring's work has its flaws, but it's suitable for introductory reading on Margaret's complex life. Agent: Anna Power, Johnson & Alcock (U.K.). (May.) © Copyright PWxyz, LLC. All rights reserved.

Historian Ring successfully details the life of Margaret Douglas, niece of Henry VIII and grandmother of the first Stuart king. Headstrong and ambitious, Margaret was at once a prominent Tudor courtier and a powerful Scottish noble whose very existence was a threat to the English crown. Her longtime friendship with Mary I, coupled with her service as lady-in-waiting to two of her uncle's wives, served Margaret well as she navigated the complicated relationships and intrigue of both English and foreign courts. She may indeed be the "Tudor that time forgot," but there is no denying that her efforts to place her family on the English throne resulted in a watershed event: her grandson, James I, united the thrones of England and Scotland in 1603. And every British monarch since that time has been one of her direct descendants. Surely it is no wonder then that her tomb in Westminster Abbey reads aedita princibus princibusque parens - descended from princes, parent to princes. General readers and students seeking a concise, entertaining narrative of the life of Margaret Douglas should look no further. Summing Up: Highly recommended. All levels/libraries. --Michele Frasier-Robinson, University of Southern Mississippi

England's Tudors continue to fascinate us hence, the steady flow of feature films, television dramas, and works of fiction. First-time author Ring demonstrates that the facts are just as dramatic in this intriguing biography. Margaret Douglas, Countess of Lennox, was the half-English and half-Scottish niece of Henry VIII, and her niece (and daughter-in-law) was Mary, Queen of Scots. Ring's account of her life is packed with the politics and intrigue of the Tudor court in all its royal splendor and complexity. Lady Margaret's aim was establishing nothing less than a united England and Scotland, ruled by one royal (and Catholic) family. So when Francis II of France died and left Mary widowed at age 18, Margaret arranged for her niece to marry her son, Henry, Lord Darnley, and their son would eventually become King James I of England and VI of Scotland. The heavy price she paid to achieve her goal is described in an absorbing narrative supported by her own writings and other contemporaneous. Royalty buffs and fans of English history will treasure this well-wrought Tudor tapestry.--Mulac, Carolyn Copyright 2017 Booklist

An introduction to one of the Tudor family's least-known women.Margaret Tudor, daughter of Henry VII, was married to James IV of Scotland and bore his son, James V. Her second husband, Archibald Douglas, fathered her daughter, also named Margaret. She is the subject of Ring's dramatic history of 16th-century England, a tempestuous period that has been the subject of many booksfor good reason. Henry VII's claims to the throne were based on distant family connections, and they fought back many usurpers. That fragile hold on the throne would continue throughout the family's history; save the short reign of Edward VI. For decades, the Tudors fought to control the country's religion, alternating from Catholic to Protestant to Elizabeth's acceptance of the "private devotions" of Catholics. Even Elizabeth changed after the Catholic "Northern Rebellion" and the pope's bull excommunicating her. As the Tudors worried about succession, young Margaret Douglas should always have been a factorand she was, until a fight with her uncle, King Henry VIII, at the end of his life saw her removed from the succession. Margaret was also the half sister of the Scottish king, James V, and married to Matthew Stewart, the Scottish Earl of Lennox. Margaret was born into this political intrigue, and her life is a perfect example of Tudor machinations. Though she bore eight children in one of the happiest marriages in the Tudor dynasty, only two sons survived. One of them, Henry Darnley, was the object of their ambition, and his son would one day become James VI. Ring ably shows Margaret's adaptation to religious mores and to the caprices of kings and queens, though she is less successful in that perpetual stumbling block of books about English history: connecting names, titles, and relationships. A wealth of correspondence and a strong knowledge of the period combine in a capable book showing life at these strange medieval courts. Copyright Kirkus Reviews, used with permission.
More book reviews at iDreamBooks.com