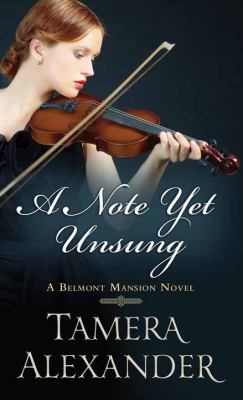 DDC classification: 813/.6 Summary: "Despite her training as a master violinist, Rebekah Carrington was denied entry into the Nashville Philharmonic by young conductor Nathaniel Whitcomb, who bowed to public opinion. Now, with a reluctant muse and a recurring pain in his head, he needs her help to finish his symphony"-- Provided by publisher.
List(s) this item appears in: Christian Fiction
Tags from this library: No tags from this library for this title. Log in to add tags.
Fiction notes: Click to open in new window
Total holds: 0

A master violinist trained in Vienna, Rebekah Carrington manages to wheedle her way into an audition with the maestro at the newly formed Nashville Philharmonic. But women are "far too fragile and frail" for the rigors of an orchestra, and Rebekah's hopes are swiftly dashed because the conductor -- determined to leave his mark on the world of classical music -- bows to public opinion. To make matters worse, Adelicia Acklen Cheatham, mistress of Belmont Mansion and Rebekah's new employer, agrees with him.

"Despite her training as a master violinist, Rebekah Carrington was denied entry into the Nashville Philharmonic by young conductor Nathaniel Whitcomb, who bowed to public opinion. Now, with a reluctant muse and a recurring pain in his head, he needs her help to finish his symphony"-- Provided by publisher.

Violinist Rebekah Carrington scores an audition for a position with the Nashville Philharmonic. Unfortunately, in 1871, female musicians are frowned upon because of their "inability" to handle the "rigorous" work. No amount of cajoling can persuade either the conductor, Nathaniel Whitcomb, or Rebekah's new employer, Mrs. Cheatham, the mistress of Belmont Mansion. Devastated at Whitcomb's refusal to let her play, she is less than pleased when he asks her to help him finish a symphony he's writing for his ailing father. However, neither Nathaniel or Rebekah can deny the growing attraction between them. Featuring a swoon-worthy courtship, this delightful historical also offers a vivid portrait of a lesser-known chapter in the 19th-century classical music scene. VERDICT This final entry of Alexander's historical romantic trilogy (A Lasting Impression; A Beauty So Rare) will leave devotees on a high note. © Copyright 2017. Library Journals LLC, a wholly owned subsidiary of Media Source, Inc. No redistribution permitted.

Christy Award-winner Alexander crafts a music-lover's delight in this third Belmont Mansion novel (after A Beauty So Rare), set in the 1870s and featuring Mrs. Adelecia Acklen Cheatham, a woman of fierce independence who loves art, nature, and music. Rebekah Carrington, grieving her grandmother's death, returns to her Nashville home after a decade of studying music in Vienna. Her relationship with her mother and stepfather is strained, and she is determined to make her own way. When she auditions for the Nashville Philharmonic, Maestro Nathaniel "Tate" Whitcomb praises her performance but slams the door on her hopes because of her gender. Mrs. Cheatham hires Rebekah as a violin tutor for her daughter, but also mandates that she assist the ailing Tate in finishing his symphony, which must be ready for the opening of the new opera house. Rebekah and Tate engage in a battle of wills as soon as they attempt to work together, but they both have too much at stake to walk away from the arrangement. This fast-moving work of inspirational historical romance highlights both classical and Appalachian music. Thanks to Alexander's vivid writing, one can almost hear the music resonating off of the page. (Feb.) © Copyright PWxyz, LLC. All rights reserved.

*Starred Review* It's 1871, and violin virtuoso Rebekah Carrington has just returned from Vienna after 10 years of study with the masters. Although she has an extraordinary talent, the Nashville Philharmonic won't accept her as a member because she is, after all, a woman. Suffering from increasingly debilitating headaches, conductor Nathaniel Tate Whitcomb sees Rebekah as just one more stress in his life. Yes, she is the most talented violinist he's ever heard, but women have no place in an orchestra. Then Tate becomes so ill he can't finish transcribing the music he hears in his head. Since he's determined to finish his symphony before his ailing father dies, he reluctantly hires Rebekah as his assistant. But Tate has many secrets, as does Rebekah, hidden truths that made her the strong woman she is. Alexander is an inspirational fiction star. Her novels possess a lyricism that draws readers in and keeps them close. As Alexander brings her superb Southern Belmont Mansions series (A Beauty So Rare, 2014) to an end, readers will remember her well-crafted, multi-dimensional characters, especially Rebekah and Tate, long after this tale is finished.--Mosley, Shelley Copyright 2017 Booklist
More book reviews at iDreamBooks.com