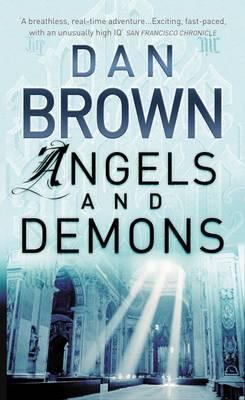 Genre/Form: Thrillers (Fiction) | Detective and mystery fiction.DDC classification: [Fic] Subject: When a renowned scientist is found brutally murdered Robert Langdon identifies the mysterious symbol on his chest as the work of the Illuminati. Somewhere within the walls of the Vatican, an unstoppable bomb counts down to oblivion. Langdon joins forces with Vittoria Vetra, an Italian scientist, to deciper the labyrinthine trail of ancient symbols that snakes across Rome to the long-forgotten Illuminati lair - a secret refuge wherein lies the only hope for the Vatican.
Tags from this library: No tags from this library for this title. Log in to add tags.
Fiction notes: Click to open in new window

When a scientist is found brutally murdered, Harvard professor Robert Langdon is asked to identify the mysterious symbol seared onto the dead man's chest. Realising it must be the work of the Illuminati - an ancient secret brotherhood sworn against Catholicism - the race is on to prevent a tragedy.

When a renowned scientist is found brutally murdered Robert Langdon identifies the mysterious symbol on his chest as the work of the Illuminati. Somewhere within the walls of the Vatican, an unstoppable bomb counts down to oblivion. Langdon joins forces with Vittoria Vetra, an Italian scientist, to deciper the labyrinthine trail of ancient symbols that snakes across Rome to the long-forgotten Illuminati lair - a secret refuge wherein lies the only hope for the Vatican.

This grand summer novel by the author of The Da Vinci Code introduces readers to famed symbologist Robert Langdon, who is attempting to stop the Illuminati, an ancient secret organization, from destroying Vatican City. VERDICT Filled with superb puzzles, a breakneck plot, and wondrous settings and descriptions of artwork, this fascinating story will feed thriller readers' appetites for riddles, conspiracies, and unlikely heroes. (c) Copyright 2012. Library Journals LLC, a wholly owned subsidiary of Media Source, Inc. No redistribution permitted.

Pitting scientific terrorists against the cardinals of Vatican City, this well-plotted if over-the-top thriller is crammed with Vatican intrigue and high-tech drama. Robert Langdon, a Harvard specialist on religious symbolism, is called in by a Swiss research lab when Dr. Vetra, the scientist who discovered antimatter, is found murdered with the cryptic word "Illuminati" branded on his chest. These Iluminati were a group of Renaissance scientists, including Galileo, who met secretly in Rome to discuss new ideas in safety from papal threat; what the long-defunct association has to do with Dr. Vetra's death is far from clear. Vetra's daughter, Vittoria, makes a frightening discovery: a lethal amount of antimatter, sealed in a vacuum flask that will explode in six hours unless its batteries are recharged, is missing. Almost immediately, the Swiss Guard discover that the flask is hidden beneath Vatican City, where the conclave to elect a new pope has just begun. Vittoria and Langdon rush to recover the canister, but they aren't allowed into the Vatican until it is discovered that the four principal papal candidates are missing. The terrorists who are holding the cardinals call in regarding their pending murders, offering clues tied to ancient Illuminati meeting sites and runes. Meanwhile, it becomes clear that a sinister Vatican entity with messianic delusions is in league with the terrorists. Packing the novel with sinister figures worthy of a Medici, Brown (Digital Fortress) sets an explosive pace as Langdon and Vittoria race through a Michelin-perfect Rome to try to save the cardinals and find the antimatter before it explodes. Though its premises strain credulity, Brown's tale is laced with twists and shocks that keep the reader wired right up to the last revelation. (May) (c) Copyright PWxyz, LLC. All rights reserved

In Switzerland, at the CERN research facility, a scientist is murdered, and a word is burned into the corpse: Illuminati. Robert Langdon, an expert in religious iconology, learns from the murdered man's daughter, Vittoria Vetra, that a quantity of antimatter has been stolen. Soon the connection between the missing antimatter and the Illuminati, an ancient secret society, becomes clear, and Langdon and Vetra are en route to Rome to prevent the destruction of the Catholic Church. This is easily the best of the Langdon novels (its sequels being The Da Vinci Code, 2003, and The Lost Symbol, 2009). Its plot is intriguing without being loopy, and it is written in a clear, unadorned style that propels the reader through the story. In The Da Vinci Code, Brown turned Langdon into something of a bore, lecturing the other characters and the reader on the historical elements of the elaborate story. Here Langdon is more like an amateur sleuth armed with some very specialized knowledge, and the plot is far less elaborate, more like a typical thriller than a dialogue-laden series of history lessons. The Da Vinci Code might be the Langdon book that everybody recognizes, but this is the one that most deserves an audience.--Pitt, David Copyright 2009 Booklist

Another near-future technothriller from the author of Digital Fortress (1998). Harvard symbologist Robert Langdon gets a call from Maximilian Kohler, director of CERN's Geneva particle-physics research complex. Physicist Leonardo Vetra has been murdered, and a quantity of dreadfully dangerous antimatter stolen; worse, Vetra was branded with a single word: Illuminati. Langdon's an expert on the history of the Illuminati, a medieval pro-science, anti-Catholic power group, often suspected of infiltrating mighty institutions but now considered extinct. The canister of antimatter soon turns up--in Rome, hidden somewhere in Vatican City, just as the church's cardinals are gathering to select a new pope. When the canister's batteries go dead--boom. As bad, someone's kidnapped the four top cardinals, and a message from the Illuminati states that one cardinal will be killed--with lots of Illuminati symbolism--every hour until the antimatter explodes. Langdon and Vetra's scientist daughter, Vittoria, must convince the late pope's chamberlain, now in charge of the Vatican until the new pope is elected, to help them unravel the mysteries of the Illuminati and, perhaps, save the cardinals from gruesome deaths. But they'll be going up against a wily and potent Illuminati assassin, causing plenty of thrilling cat-and-mouse maneuvers and life-or-death cliffhangers. And how come the powerful head of the Illuminati knows all the Vatican's secrets, and can enter and leave at will? Romance, religion, science, murder, mysticism, architecture, action. Go! Copyright ©Kirkus Reviews, used with permission.
More book reviews at iDreamBooks.com