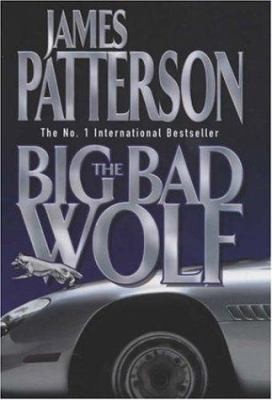 Genre/Form: Psychological fiction. | Thrillers (Fiction) | Detective and mystery fiction.DDC classification: 813.54 Subject: Across the country, men and women are kidnapped in broad daylight and then disappear completely. Alex realises these people are being bought and sold. And it seems The Wolf is the master criminal behind this terrible trade and is bringing a new reign of terror to organized crime. He has to go out on his own in order to track his new prey and try to rescue some of the victims while they are still alive.
Tags from this library: No tags from this library for this title. Log in to add tags.
Fiction notes: Click to open in new window

Across the country, men and women are kidnapped in broad daylight and then disappear completely. These people are not being taken for ransom, Alex realizes. They are being bought and sold. And it seems The Wolf is the master criminal behind this terrible trade and who is bringing a new reign of terror to organized crime.

Even as he admires the FBI's vast resources, Alex grows impatient with the Bureau's clumsiness and caution, and has to go out on his own in order to track his new prey and try to rescue some of the victims while they are still alive.

As the case boils over, Alex is in hot water at home, too. His ex-fiancée, Christine Johnson, comes back into his life - and not for the reasons Alex might have hoped.

Across the country, men and women are kidnapped in broad daylight and then disappear completely. Alex realises these people are being bought and sold. And it seems The Wolf is the master criminal behind this terrible trade and is bringing a new reign of terror to organized crime. He has to go out on his own in order to track his new prey and try to rescue some of the victims while they are still alive.

There is something to be said for consistency. Alex Cross is back, and even though he's newly employed by the FBI, everything still feels familiar and right. "Club Fed" training is going as well as one would expect, Nana is still making the best coffee in town, and Alex is still feeling guilty about his workaholic ways. When the wife of a federal judge is kidnapped, making it FBI business, Alex is pulled out of class and sent to the crime scene, creating an interesting dichotomy of newly minted federal agent/star. It turns out to be just the latest in a string of such kidnappings, and the FBI suspects a possible white slavery ring. Topping the list of suspects is the Russian Red Mafiya king, who has been shaking things up with La Cosa Nostra. Things are bumpy at home, too-a custody dispute emerges when Little Alex's mom blows into town. There are no tidy endings here, just an engrossing story that will leave readers clamoring for the sequel. The Big Bad Wolf is the biggest, baddest Alex Cross novel in years. Strongly recommended for all public libraries.-Stacy Alesi, Southwest Cty. Regional Lib., Boca Raton, FL(c) Copyright 2010. Library Journals LLC, a wholly owned subsidiary of Media Source, Inc. No redistribution permitted. All rights reserved.

Unlike the original Big Bad Wolf, Patterson's newest and arguably most fear-inspiring villain maims, slaughters and kidnaps victims for purposes of sexual slavery. Rumored to be a Russian emigre, this shrewd predator has made crime pay so fabulously he sits atop an empire capable of accomplishing any nefarious purpose, including attacks on the homes of high-ranking FBI officials. Despite having just joined the Bureau, series hero Alex Cross winds up hunting the Wolf, which puts his family in peril. Meanwhile, his former girlfriend decides she wants custody of their young son. Patterson, a master at suspenseful twists and turns, keeps the action non-stop by constantly shifting among Alex's first-person tribulations and punchy, objectively told sequences focusing on Wolf, several ultra-wealthy computer chat group slugs who are taking The Story of O much too seriously, and the chat group members' struggling victims. The effectiveness of these quick changes is heightened by the use of dual readers. Theater and TV actor Fernandez has a warm, rich voice that provides Cross with a soulful dimension often absent from the author's prose, and O'Hare (a Tony Award winner for the hit play Take Me Out) handles the other chores, satisfactorily running the gamut from Russian-accented growls to effete simpers. Their all-pro rendering of this smartly paced thriller almost makes up for the fact that major plot strings are left tantalizingly untied. Simultaneous release with the Little, Brown hardcover (Forecasts, Oct. 6, 2003). (Nov.) (c) Copyright PWxyz, LLC. All rights reserved

Alex Cross finally took the plunge at the end of Four Blind Mice(2002) and joined the FBI. The training is a little beneath Cross, who has spent years working with the FBI on the toughest cases, but he dutifully attends classes until he's pulled out to consult on a case. Wealthy women have been disappearing around the country. The latest, a judge's wife, was snatched at a shopping mall. It appears these women (and soon several young men as well) are being abducted and sold to people who have "selected" them and paid a hefty sum. The man behind it all is a Russian known only as the Wolf. Cross gets a break when one of the buyers releases the woman he paid to have abducted, but when they track him down, they find he's committed suicide. Then a major bombshell in his personal life distracts Cross from the case: his ex-girlfriend Christine, the mother of his youngest son, has reappeared, and she wants custody. Cross' first major case with the FBI will have readers on the edge of their seats, swiftly turning the pages to the exciting showdown. KristineHuntley.

Dr. Alex Cross has left Metro DC Homicide for the FBI, but it's business as usual in this laughably rough-hewn fairy tale of modern-day white slavery. According to reliable sources, more people are being sold into slavery than ever before, and it all seems to be going down on the FBI's watch. Atlanta ex-reporter Elizabeth Connolly, who looks just like Claudia Schiffer, is the ninth target over the past two years to be abducted by a husband-and-wife pair who travel the country at the behest of the nefarious Pasha Sorokin, the Wolf of the Red Mafiya. The only clues are those deliberately left behind by the kidnappers, who snatch fashion designer Audrey Meek from the King of Prussia Mall in full view of her children, or patrons like Audrey's purchaser, who ends up releasing her and killing himself. Who you gonna call? Alex Cross, of course. Even though he still hasn't finished the Agency's training course, all the higher-ups he runs into, from hardcases who trust him to lickspittles seething with envy, have obviously read his dossier (Four Blind Mice, 2002, etc.), and they know the new guy is "close to psychic," a "one-man flying squad" who's already a legend, "like Clarice Starling in the movies." It's lucky that Cross's reputation precedes him, because his fond creator doesn't give him much to do here but chase suspects identified by obliging tipsters and worry about his family (Alex Jr.'s mother, alarmed at Cross's dangerous job, is suing for custody) while the Wolf and his cronies--Sterling, Mr. Potter, the Art Director, Sphinx, and the Marvel--kidnap more dishy women (and the occasional gay man) and kill everybody who gets in their way, and quite a few poor souls who don't. As in summer movies, a triple dose of violence conceals the absence of real menace when neither victims nor avengers stir the slightest sympathy. Copyright ©Kirkus Reviews, used with permission.
More book reviews at iDreamBooks.com