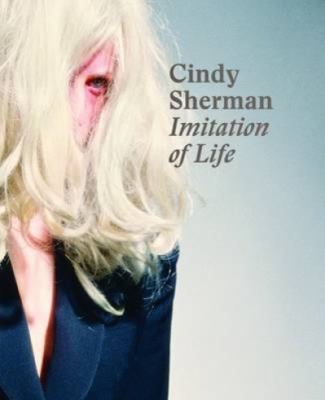 | Costume -- Pictorial works -- ExhibitionsGenre/Form: Exhibition catalogs. | Illustrated works.DDC classification: 770.92
Contents:
Introduction / Joanne Heyler -- Imitations of life; Appropriation, the cinematic impulse, and beyond / Philipp Kaiser -- Plates -- A whole theater; A conversation / Sofia Coppola and Cindy Sherman -- Works in the Broad collection and exhibition checklist.
Tags from this library: No tags from this library for this title. Log in to add tags.

Known for slipping seamlessly behind the rotating masks of fairy tale characters, centrefold models, historical figures, and clowns, Cindy Sherman tackles popular tropes in her photographs and brilliantly dismantles the stereotypes surrounding the roles she embodies. Featuring illustrations that draw from the Broad collection, the world's largest collection of Sherman's photography, as well as other sources, this book traces Sherman's most important works from 1977 to the present. Curator Philipp Kaiser, taking his cue from Sherman's choice to title the book and exhibition after Douglas Sirk's 1959 film Imitation of Life, analyses Sherman's work from the standpoint of cinema and traces how such a reading can impact the critical discourse around her photographs. The book also features a fascinating conversation between director Sofia Coppola and Cindy Sherman, which centres on Sherman's use of filmic techniques to examine women's roles and identities across a wide array of popular representations. This generously illustrated volume offers readers an intriguing new perspective from which to understand one of today's most important photographers. AUTHOR: Philipp Kaiser is a Los Angeles based curator. He is the former Director of the Museum Ludwig, Cologne and Senior Curator at the Museum of Contemporary Art, Los Angeles. Joanne Heyler is Founding Director of The Broad and Director/Chief Curator of The Broad Art Foundation. Sofia Coppola is an American screenwriter, director, producer, and actress. 94 colour, 35 b/w illustrations

The exhibition Cindy Sherman: Imitation of Life was organized by The Broad, Los Angeles, and curated by Philipp Kaiser; exhibition dates: June 11, 2016 to October 2, 2016."

Introduction / Joanne Heyler -- Imitations of life; Appropriation, the cinematic impulse, and beyond / Philipp Kaiser -- Plates -- A whole theater; A conversation / Sofia Coppola and Cindy Sherman -- Works in the Broad collection and exhibition checklist.

The first special exhibition at The Broad, a gallery that opened last year in Los Angeles, is Cindy Sherman: Imitation of Life, chronicled in this catalog of photographs spanning 1975 to the present, largely drawn from Eli and Edythe Broad's collection. Guest curator Philipp Kaiser's (formerly Museum Ludwig, Cologne, and Museum of Contemporary Art, Los Angeles) introductory essay explores cinematic impulses in Sherman's successive "Untitled" series: the various ways her images both imply narrative (as in the stills from imaginary films) and imitate pop-culture notions of feminine identity. Screenwriter/actress/director -Sofia -Coppola contributes a casual conversation between herself and Sherman about working methods and the recurring tension between beauty and artifice. The work concludes with an exhibition checklist and a list of Sherman's works in the Broad collection. Other weighty surveys of the artist's shape-shifting portraits exist (including exhibition catalogs from Jeu de Paume, 2006, and MoMA, 2012), but this show's perspective originates from the photographer herself as well as the Broads' engagement with the pieces over three decades of collecting. VERDICT Notable for its full-page, full-color images, this volume pays a fittingly cinematic L.A. homage to the influential career of a major artist.-Lindsay King, Yale Univ. Libs, New Haven, CT © Copyright 2016. Library Journals LLC, a wholly owned subsidiary of Media Source, Inc. No redistribution permitted.
More book reviews at iDreamBooks.com