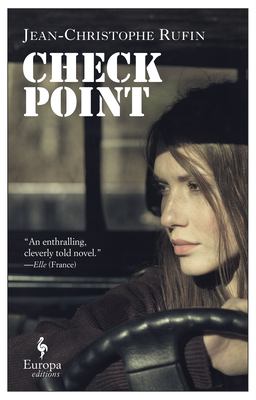 Checkpoint / Jean-Christophe Rubin ; translated from the French by Alison Anderson.

BookPublisher: New York, NY : Europa Editions, 2017Copyright date: ©2017Description: 300 pages ; 21 cm.Content type: text Media type: unmediated Carrier type: volumeISBN: 1609453727 (paperback); 9781609453725 (paperback).Uniform titles: Check point. English Subject(s): Humanitarian assistance -- Bosnia and Herzegovina -- Fiction | Yugoslav War, 1991-1995 -- Bosnia and Herzegovina -- Fiction | Non-governmental organizations -- FictionGenre/Form: Thrillers (Fiction)DDC classification: 843/.914 Summary: The four men who accompany Maud on an aid convoy couldn't be further from the cliched idea of humanitarian volunteers. One by one, they reveal the secret wounds that have brought them to this conflict zone, and the true nature of their cargo becomes clear.
Tags from this library: No tags from this library for this title. Log in to add tags.

A novel of suspense and psychological tension set in the world of international humanitarian aid by a founder of Doctors Without Borders.

The four men accompanying Maud, a young French idealist, on an aid convoy to Bosnia are very different from the clichéd image of the humanitarian volunteer. One by one, they reveal the secret wounds that have brought them to this conflict zone and, mile by mile, the true nature of their cargo . . .Prize-winning author, Jean-Christophe Rufin offers up a powerful psychological literary thriller that asks vital questions about the role of humanitarian action in today's world, bringing to light the most fundamental dilemmas of our age. As a new kind of violence insinuates its way into the heart of Europe, this novel asks whether it is more effective to take up arms against the enemy or attempt to counter violence with benevolent acts and enlightenment ideals.

"This taut thriller is distinguished by its literary polish and moral heft."-- Publishers Weekly

"This mix of well-crafted characters, psychological suspense, and the harsh realities of life in wartime results in a nail-biting, challenging literary thriller."-- Kirkus Reviews

"As a philosophical novel,Checkpoint is very engaging. . . . Gun battles, explosions, and fights all appear after the first one hundred pages. . . .Checkpoint is about the nature of modern warfare and the various definitions of humanitarianism."-- New York Journal of Books

The four men who accompany Maud on an aid convoy couldn't be further from the cliched idea of humanitarian volunteers. One by one, they reveal the secret wounds that have brought them to this conflict zone, and the true nature of their cargo becomes clear.

Set in Bosnia in 1995, at the height of the country's civil war, this taut thriller is distinguished by its literary polish and moral heft. Its plot follows the efforts of five French nationals to deliver humanitarian aid to the war-torn country in a two-truck convoy: Maud and Lionel have worked together previously for the relief organization La Tête d'Or; Marc and Alex are former soldiers who served in the country on the peacekeeping force; Vauthier is an unknown quantity whose behavior increasingly arouses Marc and Alex's suspicions. The deeper they penetrate into the country, the more hazardous the terrain and the more precarious the military checkpoints, which serve as apt symbols for the boundaries beyond which the relief mission transforms into something vastly different and more dangerous than originally planned. Rufin's (The Red Collar) characters are nuanced and believable, especially after the revelation of several deceptions breaks the team apart and forces members to choose alliances that mirror the much larger military conflict in which they're immersed. After a placid, reflective start, the novel's events snowball with a relentlessness that will keep readers turning pages until the surprise-packed ending. (May) © Copyright PWxyz, LLC. All rights reserved.
More book reviews at iDreamBooks.com