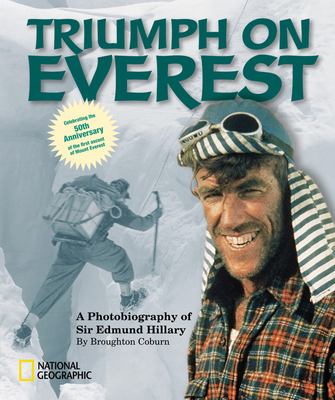 Triumph on Everest : a photobiography of Sir Edmund Hillary / by Broughton Coburn.

This exciting photobiography celebrates the extraordinary life of the New Zealand farm boy who in May 1953 became the first person known to have reached the summit of Mount Everest. With climbing partner Tenzing Norgay, the iron-willed Hillary crossed deadly icefalls, clawed his way up vertical walls, and persevered through gale-force winds until he finally stood at the top of the world. Along with this gripping adventure, readers follow the explorer's trek to the South Pole, his quest to find the Abominable Snowman, and his continuing efforts to help the Sherpa people, without whom, Hillary is convinced, he never would have scaled Everest.

Gr 5-8-This slender, well-documented photobiography is a record of the lifetime accomplishments of one of the first men to reach the summit of Mt. Everest. Threaded with quotes from Hillary's own writings, and full of fine, blue-toned photographs, the engrossing text presents the life of a reticent but world-renowned mountaineer, adventurer, and philanthropist. If you already own Sue Muller Hacking's simpler but excellent Mount Everest and Beyond (Benchmark, 1997; o.p.) or more demanding titles such as Whitney Stewart's Sir Edmund Hillary (Lerner, 1996) and Timothy Gaffney's Edmund Hillary (Children's, 1990; o.p.), you may feel you do not need this authoritative, up-to-date work. Think again.-Patricia Manning, formerly at Eastchester Public Library, NY (c) Copyright 2010. Library Journals LLC, a wholly owned subsidiary of Media Source, Inc. No redistribution permitted.

Blue-tinted photographs that capture the chill of snowy mountain peaks accompany this brief, succinctly written biography of the New Zealander who achieved fame as the first to scale Everest. Besides recounting Hillary's mountain-climbing expeditions, the book discusses his later-life humanitarian efforts establishing schools and hospitals for the Sherpas and working to combat pollution in the region. A time line is included. Bib., ind. From HORN BOOK Spring 2001, (c) Copyright 2010. The Horn Book, Inc., a wholly owned subsidiary of Media Source, Inc. No redistribution permitted.
More book reviews at iDreamBooks.com