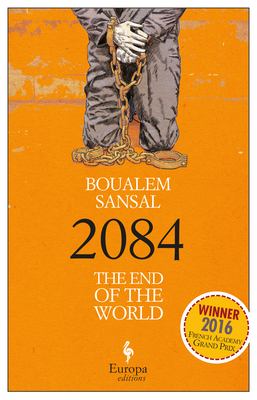 2084 : the end of the world / Boualem Sansal ; translated from the French by Alison Anderson.

A "sharply satirical" novel about an oppressive religious dictatorship and one man's discovery of an underground resistance ( Library Journal ).

A tribute to George Orwell's dystopian classic 1984 and a cry of protest against totalitarianism of all kinds, Boualem Sansal's2084 tells the story of a near future in which religious extremists have established a caliphate that forbids autonomous thought. In the year 2084, in the kingdom of Abistan--named after the prophet Abi, earthly messenger of the god Yölah--citizens submit to a single god, demonstrating their devotion by kneeling in prayer nine times a day. Remembering the past is forbidden, and an omnipresent surveillance system instantly informs the authorities of every deviant act, thought, or idea.
The kingdom is blessed and its citizens are happy, filled with purpose and piety. Those who are not--the heretics--are put to death by stoning or beheading in city squares. But Ati has met people who think differently: In ghettos and caves, hidden from the authorities, exist the last living heretics and free-thinkers of Abistan. Under their influence, Ati begins to doubt. He begins to think. Now, he will have to defend his thoughts with his life.
2084 is "a rare, powerful book, at the intersection of fable and lampoon, of satire and science fiction," a cry of freedom, a gripping novel of ideas, and an indictment of the kind of closed-minded fundamentalism that threatens our democracies and the ideals on which they are founded ( Lire ).

"Alison Anderson's deft and intelligent translation [conveys] Sansal's abhorrence of a system that controls people's minds, while explaining that the religion was not originally evil but has been corrupted. A moving and cautionary story."-- The Times Literary Supplement

"A powerful novel that celebrates resistance."-- The Guardian

Intriguing and potentially controversial because of the unexpected overlay of Islamic belief, this new work by Algerian author Sansal is another example of the dystopian literature attracting interest after the 2016 presidential election. Here, the prophet Abi rules rigidly in the name of the god Yolah, proclaiming that "submission is faith and faith is truth." Order has been restored after a horrific war left millions dead, and belief in the one true god is mandatory, with punishment swift for anyone who does not conform. Ati has returned to Abistan's capital after a two-year absence spent in pilgrimage and at a sanatorium. Although he falls into a routine, he no longer takes pleasure in common activities like spying. With a colleague, he begins excursions into so-called ghettos and realizes that somewhere out there are civilizations where freedom is possible and the old beliefs survive. That puts him on a dangerous journey. VERDICT Sharply satiric but portentous and sometimes distancing, the narrative takes some getting used to, but it's worthwhile watching Sansal dig fiercely into the essence of the all-controlling religious belief he roundly condemns. Winner of the Grand Prix du Roman from the Académie Française. © Copyright 2017. Library Journals LLC, a wholly owned subsidiary of Media Source, Inc. No redistribution permitted.
More book reviews at iDreamBooks.com