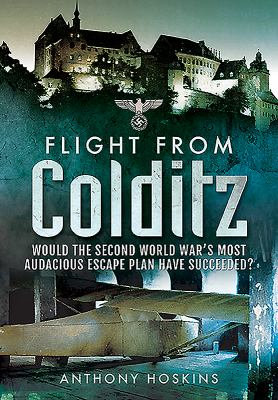 Flight from Colditz : would the Second World War's most audacious escape plan have succeeded? / Tony Hoskins ; foreword by Regina Thiede.

Colditz Castle was one of the most famous Prisoner of War camps of the Second World War. It was there that the Germans interred their most troublesome or important prisoners. Hundreds of ingenious escape attempts were made but the most ambitious of all was to build a glider and fly to freedom.

Though the glider was built, the war ended before it could be used, and it was subsequently destroyed. Using the original plans and materials used by the prisoners, in March 2012 a replica of the glider was constructed in a bid to see if the escape attempt would have succeeded. The glider was then launched from the roof of the castle roof.

Anthony Hoskins is the man who built, and helped launch, the glider. As well as examining the story behind the building of the original glider, he details the construction of the replica and the nail-biting excitement as the 'Colditz Cock' finally took to the skies.

Packed with photos of the glider and its flight over Colditz, this is the inside story of the recreation of one of the most intriguing episodes of the Second World War.