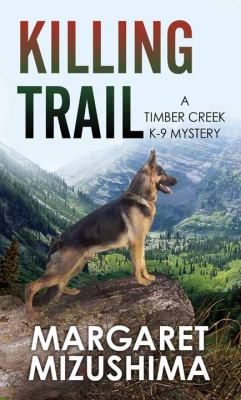 Genre/Form: Large type books. | Detective and mystery fiction.DDC classification: 813/.6 Summary: "When a young girl is found dead in the mountains outside Timber Creek, life-long resident Officer Mattie Cobb and her partner, K-9 police dog Robo, are assigned to the case that has rocked the small Colorado town"-- Provided by publisher.
Tags from this library: No tags from this library for this title. Log in to add tags.
Fiction notes: Click to open in new window

When a young girl is found dead in the mountains outside Timber Creek, life-long resident Officer Mattie Cobb and her partner, K-9 police dog Robo, are assigned to the case that has rocked the small Colorado town.

"When a young girl is found dead in the mountains outside Timber Creek, life-long resident Officer Mattie Cobb and her partner, K-9 police dog Robo, are assigned to the case that has rocked the small Colorado town"-- Provided by publisher.

Mattie Cobb has returned to her Colorado hometown of Timber Creek as a fully certified K-9 handler, along with her partner Robo, a Russian-bred German shepherd. Called out to investigate suspicious activity, the duo uncover the corpse of a popular teenage girl, accompanied by her wounded Bernese mountain dog, Belle. Cole Walker, the local veterinarian (and single dad), is asked to take care of Belle. Soon it is clear that his own daughter may know more about the case than she is letting on. Meanwhile, Mattie, Robo, and the Timber Creek PD are trying to get a handle on the drug traffic moving through town. Could those strange people out at the new health spa be involved? VERDICT Debut author Mizushima's classic police procedural adds a fresh angle involving the work of K-9s. The appealing Robo knows what he's doing, he just needs to train Mattie to trust him. Sue Henry fans will love. © Copyright 2015. Library Journals LLC, a wholly owned subsidiary of Media Source, Inc. No redistribution permitted.

Deputy Mattie Lu Cobb of the Timber Creek, Colo., Sheriff's Office, the winning heroine of Mizushima's strong debut, has found a calling as the handler of Robo, a German shepherd who's her new police service dog. Robo's discovery of the body of a teenage girl in the mountains outside of Timber Creek leads Mattie to a criminal operation that uses dogs as drug mules. Along the way, the brisk plot delves into the false security of small towns that seem isolated from crime and the grief that permeates the lives of family and friends after a senseless murder. Mattie proves to be a perceptive investigator, and her attraction to a handsome, newly divorced veterinarian is mutual. Mizushima enhances her story with a realistic view of how a K-9 team works, treating Robo as an important character, but never stooping to anthropomorphism. And it's impossible not to fall in love with Robo. Agent: Terrie Wolf, AKA Literary Management. (Dec.) © Copyright PWxyz, LLC. All rights reserved.

*Starred Review* On a drug-searching mission with her canine partner, Robo, newly trained K-9 officer Mattie Cobb discovers a girl's body and a wounded dog. Recently divorced veterinarian Cole Walker identifies the murdered girl as Grace, a friend of his teen daughter. Set in rural Timber Creek, Colorado, this smart procedural follows both Cole and Mattie as they put aside feelings and prejudices from their pasts to learn who murdered Grace. The operational details about the K-9 unit are fascinating, and the interactions between Mattie and Robo will tug atthe heartstrings of every dog lover. There are also very well realized scenes between Cole and his daughter as they struggle with grief over Grace's death and the absence of Cole's ex-wife. Mizushima's debut reflects both her skill as a suspense writer and her respect for animals. The shocking conclusion will stay with readers while they wait for the next story in the series. Pair this with Robert Crais' Suspect (2013), about an L.A. K-9 unit.--Alessio, Amy Copyright 2015 Booklist

An officer must learn to trust her K-9 partner when their small town is plagued by a shocking crime. Even though she's not the kind of woman to get close to others, especially not males, Deputy Mattie Lu Cobb likes everything about her newest partner. Maybe it's their intense three months of training together or the fact that she beat out Chief Deputy Ken Brody for the chance to work with him, but the fact that Robo's a 90-pound drug-sniffing dog might be what makes him the best partner she's ever had. Mattie's proud to be part of the first K-9 unit in Timber Creek, an honor that's a far cry from her humble roots. On her first trip out with Robo, she plans to introduce him at the local school when the two are diverted by a call about a disturbing discovery in the woods. Nobody likes pools of blood, but Mattie's glad for the chance to prove her skills to the rest of the department. In their training, Mattie had trouble learning to trust Robo; she knows she has to follow his nose, not her ideas about what might have happened. In the woods, Robo leads Mattie to another dog. Deputy Brody laughs that all Robo's done is found a friend, but the other dog turns out to be guarding a shallow grave and may have more secrets to share. Local vet Cole Walker identifies the dog as Belle, a dog that belongs to one of his daughter's school friends. Relying on her partner and her own investigative skills, Mattie tries to understand who would want to kill Belle's owner and how the murder may be connected to rumors of local drug smuggling or worse. This series kickoff, the solo debut for Mizushima (Crossing Colfax: Short Stories by Rocky Mountain Fiction Writers, 2014), reveals just enough about ancillary characters to suggest untapped opportunities while fleshing out solid backgrounds to make a cozy cozy. Copyright Kirkus Reviews, used with permission.
More book reviews at iDreamBooks.com