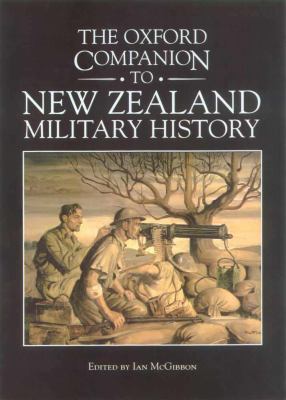 By: Mcgibbon, Ian (Edited By).

From the destructive Musket War, which culminated centuries of Maori tribal warfare, to the New Zealand wars to the world wars of the twentieth century, conflict has played a defining role in New Zealand. The Oxford Companion to New Zealand Military History provides a fascinating look at this history. It contains more then 650 entries, written by a wide range of contributors, and covers all of the main campaigns and wars since 1800. It provides numerous profiles of key figures, including Te Rauparaha, Gustavus von Tempsky, Charles Upham, Ettie Rout, Bernard Freyberg, and John Stark. It also describes the weapons and equipment used in New Zealand's military operations, and it features substantial essays on the impact of war on religion, science, technology, and industry, as well as it influence on New Zealand's language, literature, art, and film. Comprehensive and rich in detail, with over 150 photographs and 40 maps, the book is an invaluable reference for students of military history.

New Zealand's military history from the Maori traditional warfare of the pre-European period to the peacekeeping missions of the late 20th century is covered in this excellent subject encyclopedia. It contains more than 600 entries prepared by the editor and 67 contributors. The entries are well written and demonstrate command of the subject matter. The companion covers traditional military history as well as the impact warfare has had on New Zealand society. Although most entries are brief, others are detailed essays--e.g., 12 pages on the Western Front and 14 on the New Zealand Wars. In some instances, the editor provides longer entries that subsume several other topics, rather than a series of briefer entries. The entries, arranged alphabetically, are extensively cross-referenced and are supported by 151 photographs, 41 maps, 13 tables, an outline of military nomenclature, details on military rank structure, a glossary of Maori terms, and an appendix listing important military officials and political officeholders. An outstanding volume, highly recommended for all military history collections. B. P. Tolppanen Eastern Illinois University
More book reviews at iDreamBooks.com