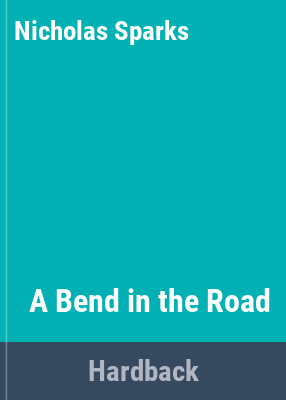 A bend in the road / Nicholas Sparks.

| Family relations -- Fiction | New Bern (N.C.) -- FictionGenre/Form: Domestic fiction. | General fiction.DDC classification: 813.54 Summary: Miles Ryan is a small town sheriff, the single father of nine-year old Jonah, and a man obsessed with uncovering the identity of the hit-and-run driver who killed his beloved wife two years ago. When his son's problems at school bring him together with Sarah Andrews, Jonah's teacher, their growing attraction sparks a series of events that will test their notions of loyalty, love and faith.
Tags from this library: No tags from this library for this title. Log in to add tags.
Fiction notes: Click to open in new window

Miles Ryan is a small town sheriff, the single father of nine-year old Jonah, and a man obsessed with uncovering the identity of the hit-and-run driver who killed his beloved wife two years ago. When his son's problems at school bring him together with Sarah Andrews, Jonah's teacher, their growing attraction sparks a series of events that will test their notions of loyalty, love and faith.

Sweet, accessible, uplifting and predictable, the latest love story from Sparks (The Notebook) leaves the reader with just one burning question: Why is this consummate beach book being published in the fall? The nearly thwarted but eventually triumphant romance of deputy sheriff Miles Ryan and second-grade teacher Sarah Andrews goes down as easily as marshmallow fluff and offers about as much real nourishment. Miles's high school sweetheart, Missy, was killed in an unsolved hit and run accident, leaving him to raise their son, Jonah, in New Bern, N.C. Sarah's politically ambitious husband, Michael, dumped her when her ovaries proved inactive, and she fled to New Bern to teach, and love, other people's kids. Miles and Sarah meet at a parent-teacher conference, and the sparks fly. But there's a fly in the ointment as well; an italicized voice threaded among the happy chapters alerts us that Missy's death was caused by someone whose identity, if revealed, could destroy Miles and Sarah's newfound joy. In Sparks's heaven, clouds exist to make silver linings look the brighter. As tough truth shadows their landscape, Miles and Sarah find depths within themselves, and their rekindled light illumines all. New Bern becomes a city of the reborn. Charlie Curtis, Miles's stickler boss, learns to bend; Missy's aimless killer morphs into a healer; and Jonah once again knows a mother's love. The opposite of edgy, with simple sentences and soft-pedaled sex, Sparks's plain vanilla morality will doubtless sell like ice cream on a steamy day. (Sept.) Forecast: Major television and print advertising and an 18-city author tour will broadcast Sparks's latest from the rooftops; expect instant bestsellerdom. (c) Copyright PWxyz, LLC. All rights reserved

Love and death are constant companions in Sparks' books, and this one is no exception. Miles Ryan, deputy sheriff of New Bern, North Carolina, had married his high-school sweetheart, Missy, and was living a charmed life when tragedy struck. In 1986, Missy was killed by a car on an isolated road while she was out jogging, and the driver was never found. Two years later, Miles is still haunted by the lack of closure and only recently has shown signs of overcoming his grief. The only bright spot in his life is his seven-year-old son, Jonah, who is now having trouble in school. Then Miles meets Jonah's teacher, Sarah Andrews, and is drawn to her. A newcomer to town, she has moved to be near her family and to escape from a disastrous divorce. The two broken souls recognize each other's fragility as they work together to help Jonah. They embark on a serious relationship, which is sorely tested after Miles receives a tip about Missy's accident. In his determination to find the culprit, he throws his training out the door in his crazed his pursuit for justice. Anyone who disagrees with him or his methods is perceived as the enemy, including his boss and friend, and Sarah, who tries to be the voice of reason. Once again, Sparks brings a powerful tale of true love to fruition, proving that love stories can be sweet without being cloying. --Patty Engelmann
More book reviews at iDreamBooks.com