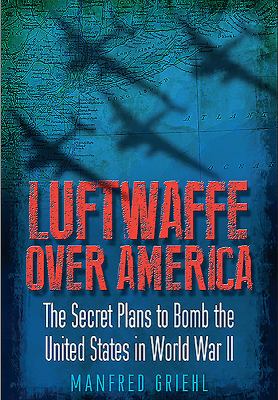 | Aeronautics, Military -- Technological innovations -- Germany -- History -- 20th centuryDDC classification: 940.544943 Summary: Reveals Nazi Germany's secret plans to bomb New York City and the eastern seaboard during World War II, and explores how those attacks could have impacted the war's end.
Tags from this library: No tags from this library for this title. Log in to add tags.

This thought-provoking book examines the Nazi German plans to raid - and bomb - New York and the eastern seaboard in the event of a successful invasion of the Soviet Union.

The plans rested upon the use of transoceanic aircraft, such as the six-engined Ju 390, Me 264 or Ta 400. The Third Reich was unable to produce these machines in sufficient numbers, however, if the Soviet Union had been conquered, these plans would have become a reality. With the seizure of vital resources from the Soviet Union the Wehrmacht would have had enough fuel and material to mass-produce giant bomber aircraft: it was a near-run thing. The collapse of the Wehrmacht infrastructure and the premature end of the Thousand Year Reich ensured that plans for long-range remote-controlled missiles never got past the drawing board.

This fascinating, thoroughly researched study offers valuable insights into how Germany developed new weapons and shows why the attempts to develop long range bombers were frustrated until they were terminated by the end of hostilities. Includes more than a hundred rarely seen photographs and original plans.

Reveals Nazi Germany's secret plans to bomb New York City and the eastern seaboard during World War II, and explores how those attacks could have impacted the war's end.

Using extensive primary and secondary sources, Griehl (Fighters over Russia) argues that by the end of World War II, Germany was much more technologically advanced than many believed and had plans to develop long-range aircraft. He uses a chronological approach to describe these efforts, revealing the many obstacles facing the Germans, particularly the lack of resources and the Luftwaffe's ever-changing priorities, which ranged from short-range bombers for the Russian campaign to fighters for countering the Allied invasion. The author wraps his arguments and insights around a far-fetched German plan to bomb the United States to cause panic and require the installation of more defenses. A very specialized book that requires some effort to understand; recommended for libraries that already own Griehl's other works or that specialize in World War II history.-Lt. Col. Charles M. Minyard (ret.), U.S. Army, Blountstown, FL (c) Copyright 2010. Library Journals LLC, a wholly owned subsidiary of Media Source, Inc. No redistribution permitted.

Although the German Air Force of WWII, the Luftwaffe, was almost exclusively a battlefield air force, the historical footnote of German long-range, strategic aircraft is covered in a solid fashion by the prolific Griehl (Luftwaffe at War, etc.). The heart of the book is an accurate history of the development of a plethora of long-range experimental airplanes and the strategic policy decisions that drove this development, such as reconnaissance over the Atlantic Ocean and plans to bomb the U.S. Quotations from conferences of the Luftwaffe high command on the problems of aircraft development and plans for the air war highlight the story. Although few of the aircraft covered had any impact on the air war in Europe, they do make interesting reading as sidebars to the conflict and precursors of postwar developments in jet aircraft and rockets. The latter, such as the well-known V-1 and V-2, are given cursory treatment, but a chapter on ordnance and bombs has been included that nicely complements the aircraft featured. The unique characteristics and performance of the many aircraft covered?from the ME 264 long range bomber designed to bomb American industries to the Raumgleiter, a ?rocket bomber? that would fly outside the earth?s atmosphere (a prescursor to America?s Space Shuttle)?are explained in simple terms, suitable for the non-specialist. Little combat action and few flying tales have been included; unusual aircraft are the thrust of the book. (Dec.) Copyright 2004 Reed Business Information.
More book reviews at iDreamBooks.com