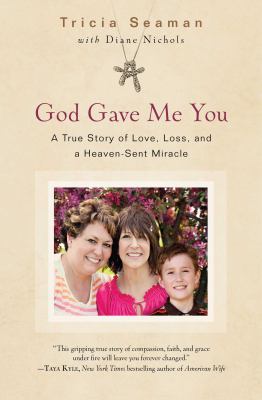 God gave me you : the true story of love, loss, and a heaven-sent miracle / Tricia Seaman ; with Diane Nichols.

DDC classification: 362.19699/40092 | B
Contents:
Room 173 -- The request -- Baby fever -- Where the road leads -- Beyond the hill -- What's left behind -- The Easter visit -- Trial run -- The waiting game -- A day to remember -- Home, sweet home -- A new direction -- One big happy family -- A circle of kindness -- No place like Walmart -- Nesting -- Time out -- Toes in the sand -- A whole new world -- The birthday kitten -- Too close for comfort -- Broadway bound -- Steps toward heaven -- The calm before the storm -- Letting go -- Heaven gains an angel -- Purple skies.
Summary: Terminal cancer patient Trish Somers asks oncology nurse Tricia Seaman to care for her son.
Tags from this library: No tags from this library for this title. Log in to add tags.
Total holds: 0

When a single mother with terminal cancer asked a nurse she'd met in the oncology ward to raise her son, neither could have imagined the miracles God had in store.<br> <br> God Gave Me You tells the true story of how these two incredible mothers met, the immediate bond they formed, and the ups and downs of joining families as one's earthly life ebbed away. The miracle of these two families coming together demonstrates that family isn't always blood--sometimes it's made up of the people God gives you if you have a willing heart.<br> <br> Oncology nurse Tricia Seaman and her family had their hearts set on adopting a son. They were months into the grueling process when Tricia met a terminally ill cancer patient on her regular rounds. Curiously, the two shared the same name. Trish Somers was that patient--a single mom whose world revolved around her eight-year-old son, Wesley. As the young mother poured out her fears and emotions during her post-operative care, Tricia sensed theirs would be like no other nurse-patient relationship she had experienced in her career.<br> <br> When the cancer spread, it became clear Trish had only a short time left to live. That's when the inconceivable happened: Trish asked her nurse--a woman who had been a complete stranger just days before--to raise her beloved son when she passed away.<br> <br> God Gave Me You will inspire you with a story of courage, trust, and faith that God's plans are bigger and more amazing then we could hope for on our own. It's a story you'll turn to again and again when you're looking for hope and a reason to believe in miracles.