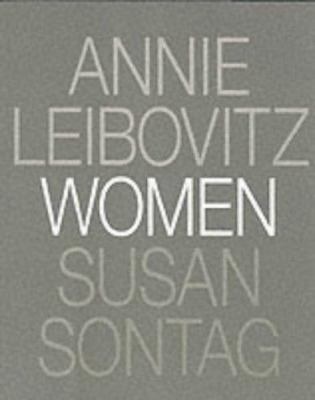 'Who are we?' asks Susan Sontag. The 'we' encompasses a broad spectrum. The women in this book include the anonymous, chief justices, strippers, aerospace engineers, athletes, scientists, and the First Lady. It is an anthology of women which culminates in a great portrait of women of all races and religions, at the end of the century. It is part of the story of how women are presented and how they think of themselves.

A leading photographer offers 150 photographs of women, from Hillary Rodham Clinton to Rosie O'Donnell to an architect, a rancher, a bodybuilder, and more. (c) Copyright 2010. Library Journals LLC, a wholly owned subsidiary of Media Source, Inc. No redistribution permitted.

-To look upon the faces of the women photographed in this collection of more than 200 portraits is to marvel at and admire the intensity and dignity of the personalities represented. The subjects depicted encompass every imaginable field of endeavor. There are aerialists, writers, coal miners, battered women, and socialites, to name a few. They range from anonymous to well known. Leibovitz has become a celebrity in her own right since starting her career at Rolling Stone and then moving on to work at Vogue and Vanity Fair. She is well known for her photographs of some of the icons of 20th-century culture-rock stars, movie stars, politicians, athletes, and novelists, as well as many other famous figures, often posing her subjects in unconventional and surprising ways. Sontag's thought-provoking essay gives further insight and explanation. Young adults will be inspired, challenged, and moved both by the accomplishments and situations of the women photographed, as well as by the skill and eye of the artist who captured their images.-Turid Teague, Fairfax County Public Library, VA (c) Copyright 2010. Library Journals LLC, a wholly owned subsidiary of Media Source, Inc. No redistribution permitted.

Diversity is the hallmark of this collection of 170 portraits of women; almost every conceivable category--age, wealth, fame, religion, motherhood--is included. This nonjudgmental inclusiveness may be what will identify this collection as particularly belonging to the 1990s. As Sontag's essay points out, issues of how women are defined and seen are inevitably raised when femaleness is the subject. Most of the women in these portraits are identified by their occupations (exceptions are the very young, beauty pageant types, and victims of domestic violence). Though job identification is expected of men, it is not unilateral with perceptions of women. Further, several women do not "look" like their professions (the writer surrounded by gardening gear, the doctor in a muddy landscape), which raises the question of the validity of work identification in general and its applicability to women as well as men. Being looked at, i.e., being attractive, is usually considered an integral part of femininity. Though Leibovitz addresses beauty in a variety of ways, her coupled photographs of Las Vegas showgirls before and after costume and make-up demonstrate, especially pointedly, the illusion of beauty. The black-and-white portraits generally are more psychologically compelling, while the color portraits tend to be as much about color and composition as personality. All levels. S. Spencer; North Carolina State University

The first portrait in Leibovitz's superb gallery of women is of her mother, as fitting a presence as Sontag's, which takes the form of a crisp essay on photography and women's persistently undermined role in society. Sontag points out that the 170 women, both famous and unheralded, whom Leibovitz so artistically immortalizes, will be viewed as women always are, both as objects of beauty and as gauges of the achievements of the women's movement. Questions of allure and liberation are often at odds, and Leibovitz toys with the conflict. In some photographs, such as a group portrait of miners, the eye searches for the female, while in others, including portraits of athletes and the stunningly proud and aggressive Jerry Hall with her son at her breast, the explicitly feminine is manifest in fierce physical power. Leibovitz greatly increases our lexicon of womanhood with her brilliant photographs of musicians, doctors, teachers, trapeze artists, gangbangers, nude women, a woman in chador, women soldiers, and girls with their Barbies, all commanding attention and respect. --Donna Seaman
More book reviews at iDreamBooks.com