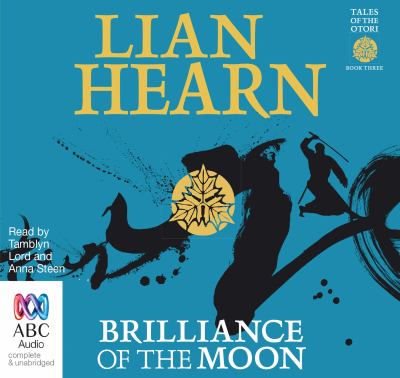 Genre/Form: Fantasy fiction. | Historical fiction. | Adventure fiction. | Audiobooks.DDC classification: A823.4 Read by Tamblyn Lord and Anna Steen.Summary: Teenage lovers, Takeo and Kaede, are now married. But their destinies are determined by forces beyond their control. Takeo leads an army into battle, and Kaede, far from his protection, is treacherously betrayed. Their love will survive until death, which, in the savage, beautiful world of the Otori, is only ever a lightning sword-stroke away.
Tags from this library: No tags from this library for this title. Log in to add tags.
Fiction notes: Click to open in new window

In the third volume of the phenomenal series that began with the bestselling Across the Nightingale Floor and then Grass For His Pillow, the teenage lovers, Takeo and Kaede, are now married. But their destinies are determined by forces beyond their control. Takeo leads an army into battle, and Kaede, far from his protection, is treacherously betrayed. Their love will survive until death - which, in the savage, beautiful world of the Otori, is only ever a lightning sword-stroke away.

Teenage lovers, Takeo and Kaede, are now married. But their destinies are determined by forces beyond their control. Takeo leads an army into battle, and Kaede, far from his protection, is treacherously betrayed. Their love will survive until death, which, in the savage, beautiful world of the Otori, is only ever a lightning sword-stroke away.

Set in an imaginary medieval Japan, the pseudonymous Hearn's third elegant installment in her epic fantasy (after 2002's Across the Nightingale Floor and 2003's Grass for His Pillow) is a fragrant blend of romance and martial-arts action. Her warrior hero, Takeo Otori, feels destined to fulfill the potent prophecy of a holy woman: "Your lands will stretch from sea to sea, but peace comes at the price of bloodshed. Five battles will buy you peace, four to win and one to lose." Intrigue, heartaches and battles ensue as Takeo, of mixed blood and conflicting loyalties (to the pseudo-Christian Hidden, the noble Otori clan and the dangerous, supernaturally gifted Tribe), seeks to unite the Three Countries. Desperately in love with Kaede Shirakawa, whom he secretly wed at the end of Grass for His Pillow, Takeo must now assist her in reclaiming her lands of Maruyama while balancing his own need to avenge the deaths of his blood father and his adoptive father, Lord Shigeru. The fates of such characters as Kaede's lover, Dr. Ishida, and her nemesis, Lord Fujiwara, who's determined to possess her, provide some cool aftershocks, while the afterword adds another-that a book four may follow. Agent, Joe Regal at Regal Literary. (June 7) FYI: Hearn is the pseudonym of Australian children's book author Gillian Rubinstein. Foreign rights have been sold in 23 markets. (c) Copyright PWxyz, LLC. All rights reserved

Adult/High School-Kaede and Takeo find themselves in danger after their hasty marriage. Lord Fujiwara is furious that Kaede chose to marry another man when he considered them betrothed, and the warlord Arai considers Takeo presumptuous. The Tribe is split over the decision to kill Takeo. The young lovers must find allies in unexpected places to claim the domains that are rightfully theirs. In the end, they are both saved by a timely earthquake. This is a satisfactory conclusion to the story line, although the afterword virtually promises a sequel. Hearn's writing is evocative and subtle. A great deal of the excitement and intrigue of the first book is missing, but readers who have stuck with Takeo and Kaede will want to continue following their adventures.-Susan Salpini, TASIS-The American School in England (c) Copyright 2010. Library Journals LLC, a wholly owned subsidiary of Media Source, Inc. No redistribution permitted.

The third book in the Otori trilogy picks up where Grass for His Pillow 0 BKL Jl 03 left off, just after the wedding of Takeo Otori and his beloved Shirakawa Kaede. The prophecy that Takeo will fight five battles, "four to win and one to lose," factors heavily in the action of the novel as Takeo sets out to win back both Kaede's ancestral lands and those of his own adoptive father. Along the way, Takeo is plagued by assassins sent by the Tribe, who have sworn to kill the young warrior. After winning two battles on the way to Kaede's lands, Takeo sets off to seek a childhood friend who could be a key ally. While he is gone, Kaede discovers her sisters have been taken hostage by Lord Fujiwara and the powerful warlord Arai. Kaede goes to rescue her sisters, but Fujiwara captures her and forces her into marriage with him. When Takeo learns what has happened he determines to rescue her, as fate draws him toward the final three battles that are destined to bring peace to the region. This is a worthy conclusion to a genuinely thrilling epic saga. Even more good news lies in the fact that the ending leaves open the possibility of another Otori trilogy. --Kristine Huntley Copyright 2004 Booklist

The Otori trilogy smashes its way to a conclusion. Previously (Across the Nightingale Floor, 2002; Grass for His Pillow, 2003), the harsh beauty of the pseudo-Japan that Hearn had created allowed readers to think that something kinder might flower there, nurtured by the star-struck love between the ethereal beauty Kaede and Otori heir Takeo. But this time out, human nature rears its petty head and the results aren't pretty. The war that was threatened after Takeo's killing of the oppressive Lord Iida has finally been unleashed across the land, and Takeo is mustering a small, determined army to fight it--barely after Takeo and Kaede have stopped saying their wedding vows. It seems that everyone is gunning for Takeo: the rest of Iida's Tohan clan, as well as an alliance of families from the east, and the mythical Tribe (a scattered people who sell their near-magical, ninja-like skills to the highest bidders and think their kin Takeo a traitor). It doesn't take long for Takeo to leave behind the last bit of humanity left in him from Nightingale, when he was a foundling of the Hidden, the kindly Christian-like cult ferociously hated throughout the land. Here, Takeo appears to have become just another cruel warlord, torturing enemies for information and meting out cruel deaths as examples to others. This shift in personality gives the book a more mournful tone and that tempers its surging battle scenes and even dulls its romantic leanings. Hearn makes the parallels between her world and real-life Japan more obvious here--there are more references to a "mainland" as well as pale-skinned "barbarians" with strange, powerful new weapons--a device that works well with the book's increased sense of realism. There is heroism, to be sure, and many a noble speech, but there are also a sadness and an acknowledgement of human folly that raise Hearn's writing far above where it's been before. Lyric fantasy with a rare sense of the tragic. Copyright ©Kirkus Reviews, used with permission.
More book reviews at iDreamBooks.com