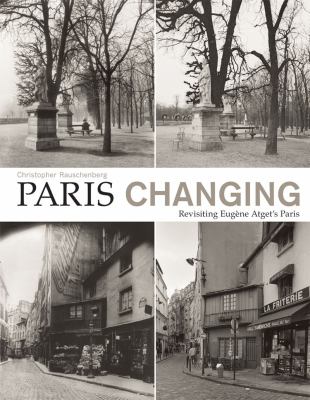 Between 1888 and 1927 Eugène Atget meticulously photographed Paris, capturing in thousands of photographs the city's parks, streets, buildings, and diverse inhabitants. His images preserved the vanishing architecture of the ancien régime as Paris grew into a modern capital, and established Atget as one of the twentieth century's greatest photographers.

Christopher Rauschenberg spent a year in the late 1990s rephotographing many of Atget's locations. By meticulously replicating the emotional and aesthetic qualities of Atget's images, Rauschenberg vividly captures the changes the city has undergone and its enduring beauty. His work is both an homage to his predecessor and an artistic study of Paris in its own right. Each site is indicated on a map of the city, inviting readers to follow in the steps of Atget and Rauschenberg themselves. If atrip to the City of Lights is not imminent, this luscious portrait of Paris then and now is the next best thing.

Essays by Clark Worswick and Alison Nordstr'm give insight into Atget's life and Rauschenberg's work. The book concludes with an epilogue by Rosamond Bernier and a portfolio of other images of Paris by Rauschenberg.

Eminent French photographer Atget devotedly photographed the French capital and surrounding area from the late 19th century up until 1927. This compendium of the photographer's oeuvre during the belle epoque is an enchanting catalog of the city's streets, parks, neighborhoods, shops, and, only occasionally, its people. As if this were not already feast enough for the eyes, during the late 1990s photographer Rauschenberg, son of artist Robert Rauschenberg, covered the same ground to update these sites for a photographer's view of the modern Paris. This volume features 76 pairs of images--Atget across from Rauschenberg--in rich duotones that you'll want to reach out and touch. Sometimes the paired images look almost identical; other times, the "updating" is more apparent. Maps are included to help readers find their way around the city, while essays by Clark Worswick and Alison Nordstrom provide a context and Rosamond Bernier writes an epilog. Recommended for larger photography collections.--Edward Cone, New York (c) Copyright 2010. Library Journals LLC, a wholly owned subsidiary of Media Source, Inc. No redistribution permitted.
More book reviews at iDreamBooks.com