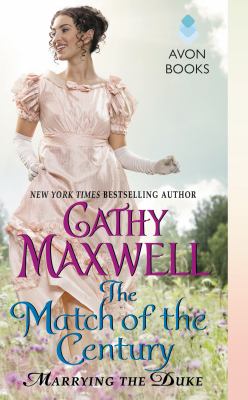 The match of the century / Cathy Maxwell.

DDC classification: 813/.54 Summary: "Every debutante aspires to snag a duke. Elin Morris just happens to have had one reserved since birth. But postponements of her marriage to London's most powerful peer give Elin time to wonder how she will marry Gavin Baynton when she cannot forget his brother, Benedict"--Page [4] of cover.
Tags from this library: No tags from this library for this title. Log in to add tags.
Fiction notes: Click to open in new window
Total holds: 0

<p>In New York Times bestselling author Cathy Maxwell's glittering new series, wedding bells are ringing... until the return of a rake throws a bride's plans-- and heart--into a tailspin</p> <p>Every debutante aspires to snag a duke. Elin Morris just happens to have had one reserved since birth. But postponements of her marriage to London's most powerful peer give Elin time to wonder how she will marry Gavin Baynton when she cannot forget his brother, Benedict.</p> <p>Already exasperated at being yanked from the military to meet "family obligations," now Ben must suffer watching his arrogant sibling squire the only woman he has ever loved. Joining the army saved Ben from sinking into bitterness, but seeing Elin again takes him back to the day they surrendered to their intoxicating desire.</p> <p>As the wedding draws near, Elin tries to push Ben far from her thoughts. When danger brings them together, there is no denying their feelings. But can Elin choose love over duty...'</p>

"Every debutante aspires to snag a duke. Elin Morris just happens to have had one reserved since birth. But postponements of her marriage to London's most powerful peer give Elin time to wonder how she will marry Gavin Baynton when she cannot forget his brother, Benedict"--Page [4] of cover.

Promised from childhood to Gavin Whitridge, the Duke of Baynton, Elin Morris has always known they would wed, even though it was Gavin's younger brother, Ben, who first stole her heart-and more-when they were only teens and then left her shattered when he abruptly went off to the army. Now, years later, Ben is forced to come home as Elin and Gavin are about to announce their engagement, and once again Elin sees that she's never stopped caring for Ben. And if that weren't enough, there's the frightening little matter of someone trying to kill her. VERDICT Duty and responsibility war with bone-deep love as the nicely developed characters gradually come to terms with the truth. This fast-paced, danger-studded Regency sees its star-crossed lovers get their well-deserved happy ending; a sparkling new series from Maxwell (The Groom Says Yes), who lives in Virginia. © Copyright 2015. Library Journals LLC, a wholly owned subsidiary of Media Source, Inc. No redistribution permitted.

A delicious duke prepares to marry his perfect bride, only to discover that she's in love with someone else: his brother. Maxwell (The Groom Said Yes) delivers sweetly scintillating romance spiced with a dash of mystery in the first novel of her Marrying the Duke Regency series. Elin has been groomed since birth to be the wife of Gavin, the Duke of Baynton. A youthful indiscretion with Gavin's brother, Ben, quickly ended with heartbreak. He was sent off to military service, and she devoted herself to her familial duty. When Ben comes home after eight years of no contact, arriving on the night of Elin and Gavin's betrothal ball, it's not to claim Elin's hand but to blast Gavin for ruining Ben's military career. Even though he's grown up, at heart he's still a grumpy younger brother. Lighthearted fun perfectly balances the somewhat unconventional take on the mores of the time and the enormity of a threat to Elin's life. The focus on strong characterization sets the stage for an exceptionally cozy read and heightens anticipation for the rest of the series. Agent: Robin Rue, Writers House. (Dec.) © Copyright PWxyz, LLC. All rights reserved.

Although Gavin Whitridge, the Duke of Baynton, is Benedict's older brother, there have been times when Ben has hated him. First Gavin forced Ben to give up his commission in the army in order to return home and assume his family duties. As if that wasn't bad enough, Ben will have to stand idly by while his brother marries Elin Morris, the only woman Ben ever loved. But then a tragedy occurs at the betrothal ball, and the wedding is postponed. Now, nearly two years later, Ben hasn't forgotten Elin, who unexpectedly crosses his path once again. It seems that someone is trying to kill her, and the only person who can return her safely to Gavin's arms is Ben. Readers who enjoy Regencies seasoned with a generous dash of mystery and danger will savor Maxwell's (The Bride Says No, 2014) latest elegantly written romance, the first in her Marrying the Duke series, since it delivers not only suspense, but also the sort of richly nuanced characters for which she is known and admired.--Charles, John Copyright 2016 Booklist

An heiress plans to wed a handsome duke to please her ambitious parents, until the duke's scapegrace brother returns from the war and changes her mind.On the eve of her betrothal to Gavin Whitridge, Duke of Baynton, Elin Morris is full of doubts. Her sparkling socialite of a mother has persuaded her to marry the duke, but at the last minute, two things happen that complicate and delay the betrothal. The duke's younger brother, Lord Ben, returns from military service, reminding Elin of their childhood friendship and ill-fated romance. And Elin's mother dies suddenly, collapsing during the betrothal ball and leaving Elin alone with her loving but distant father. The first in a new series by Maxwell (The Bride Says Maybe, 2014, etc.), the story takes a tiresome turn when an attempt is made on Elin's life by mysterious ruffians and Lord Ben inevitably happens to be in the neighborhood to save her life. The two spend several days on the run in the countryside, working out their differences, getting thoroughly filthy, subsisting on rabbits, and ultimately rekindling their romance. The love story is one of the best parts of the novel. They have to forgive each other and themselves for their youthful stupidity now that they've reached the ripe old age of 23. The complexity of the family relationships is also impressive, especially the tension between Ben and his mother and brother. But the mystery of Elin's attack makes the story drag. It's too predictable, too riddled with unlikely coincidences and convenient surprises. The characters are likable but just foolish enough to experience a satisfying amount of personal growth over the course of the story. Maxwell would do well to avoid dabbling in mystery next time. Copyright Kirkus Reviews, used with permission.
More book reviews at iDreamBooks.com