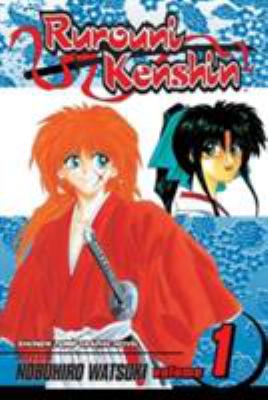 Genre/Form: Graphic novels.DDC classification: 741.5/952 Summary: A warrior arose 140 years ago in Kyoto, with the coming of the American "Black Ships, " who helped introduce the progressive age known as Meiji and then vanished. This tale begins in the 11th year of Meiji, in Tokyo.
Tags from this library: No tags from this library for this title. Log in to add tags.

Packed with action, romance and historical intrigue, Rurouni Kenshin is one of the most beloved and popular manga series worldwide. Set against the backdrop of the Meiji Restoration, it tells the saga of Himura Kenshin, once an assassin of ferocious power, now a humble rurouni , a wandering swordsman fighting to protect the honor of those in need.

A hundred and fifty years ago in Kyoto, amid the flames of revolution, there arose a warrior, an assassin of such ferocious power he was given the title Hitokiri : Manslayer. With his bloodstained blade, Hitokiri Battosai helped close the turbulent Bakumatsu period and end the reign of the shoguns, slashing open the way toward the progressive Meiji Era.  Then he vanished, and with the flow of years became legend.

In the 11th year of Meiji, in the middle of Tokyo, the tale begins. Himura Kenshin, a humble rurouni , or wandering swordsman, comes to the aid of Kamiya Kaoru, a young woman struggling to defend her father's school of swordsmanship against attacks by the infamous Hitokiri Battosai. But neither Kenshin nor Battosai are quite what they seem...

Published in the original Japanese format; i.e. the pages and art content should be followed from right to left ('backwards').

A warrior arose 140 years ago in Kyoto, with the coming of the American "Black Ships, " who helped introduce the progressive age known as Meiji and then vanished. This tale begins in the 11th year of Meiji, in Tokyo.

Fans of the popular Rurouni Kenshin anime TV series, available on DVD and shown on Cartoon Network, have been asking for years for the original Kenshin manga that inspired the anime to be released in English. Viz has now fulfilled that wish. In Japan during the 1860s, Kenshin Himu ra was a feared assassin, fighting the warriors of the Shogun to restore the Emperor to power. But after his side achieved victory, Kenshin disappeared, and now, 11 years later, he is a rurouni (a wanderer) who will no longer kill. In this first volume, Kenshin helps swordswoman and instructor Kaoru Kamiya defeat the murderers attempting to take over her dojo (training hall). Charmed by her philosophy of "swords that give life," he decides to stay with her. The book also introduces Kaoru's young student Yahiko and the edgy Sanosuke, master of the zanbato, the heaviest sword ever made. Watsuki's detailed art is excellent, with explosive swordfighting scenes, and the characters and story are compelling. With some explicit violence, this is rated "for older teens," but it will interest adults as well. With its popularity and low price, this is easily recommended for all collections. (c) Copyright 2010. Library Journals LLC, a wholly owned subsidiary of Media Source, Inc. No redistribution permitted.
More book reviews at iDreamBooks.com