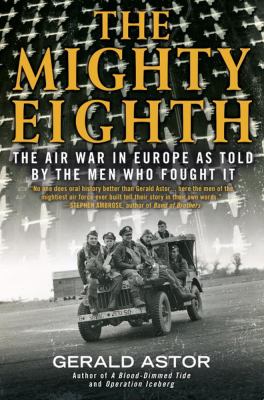 The mighty eighth : the air war in Europe as told by the men who fought it / Gerald Astor.

In the skies of World War II Europe, the Eighth Air Force was a defining factor in turning the tide against the Nazis. In these gripping oral histories, the sacrifice of the 'Mighty Eighth' is described by those who experienced it. At the outbreak of World War II, America was woefully unprepared for a fight, though Europe was already years into the battle. Soon, though, America's war machine was rolling out pilots, engineers planes and materials in astounding numbers. It was called the Eighth Air Force - and it would hit the Nazi juggernaut like a lightning bolt.