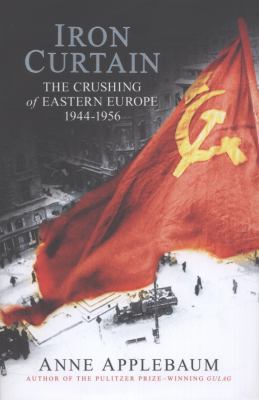 At the end of the Second World War, the Soviet Union unexpectedly found itself in control of a huge swathe of territory in Eastern Europe. Stalin and his secret police set out to convert a dozen radically different countries to a completely new political and moral system- communism. In Iron Curtain , Pulitzer Prize-winning historian Anne Applebaum describes how the Communist regimes of Eastern Europe were created and what daily life was like once they were complete.

Applebaum describes in devastating detail how political parties, the church, the media, young people's organizations - the institutions of civil society on every level - were quickly eviscerated. She explains how the secret police services were organized, how the media came to be dominated by communists, and how all forms of opposition were undermined and destroyed. Ranging widely across new archival material and many sources unknown in English, she follows the communists' tactics as they bullied, threatened and murdered their way to power. She also chronicles individual lives to show the choices people had to make - to fight, to flee, or to collaborate.

Within a remarkably short period after the end of the war, Eastern Europe had been ruthlessly Stalinized. Today the Soviet Bloc is a lost civilization of cruelty, paranoia, bizarre morality and strange aesthetics. Iron Curtain is a brilliant history of a brutal world began, an exceptional work of moral reckoning and a haunting reminder of how fragile free societies can be.

Iron Curtain is an exceptionally important book which effectively challenges many of the myths of the origins of the Cold War. It is wise, perceptive, remarkably objective and brilliantly researched. -- Antony Beevor Anne Applebaum's Iron Curtain [is] certainly the best work of modern history I have ever read. -- A.N. Wilson Financial Times Applebaum's description of this remarkable time is everything a good history book should be: brilliantly and comprehensively researched, beautifully and shockingly told, encyclopedic in scope, meticulous in detail... it is a true masterpiece. -- Keith Lowe Sunday Telegraph In her relentless quest for understanding, Applebaum shines light into forgotten worlds of human hope, suffering and dignity... Others have told us of the politics of this time. Applebaum does that but also shows what politics meant to people's lives, in an era when the state did more to shape individual destinies than at any time in history. -- John Connelly Washington Post Iron Curtain is modern history writing at its very best; assiduously researched, it wears its author's considerable erudition lightly. It sets a new benchmark for the study of this vitally important subject. -- Roger Moorhouse Independent on Sunday Anne Applebaum's masterly book gives for the first time, a systematic explanation of the other, largely untold, side of the story... it is a window into a world of lies and evil that we can hardly imagine. -- Edward Lucas Standpoint.

Anne Applebaum is a historian and journalist, a regular columnist for the Washington Post and Slate, and the author of several books, including Gulag: A History, which won the 2004 Pulitzer Prize for non-fiction. She is the Director of Political Studies at the Legatum Institute in London, and she divides her time between Britain and Poland, where her husband, Radek Sikorski, serves as Foreign Minister.

When World War II came to an end in Europe in May 1945, the armies of the Soviet Union occupied all of Eastern Europe-and for the next 45 years that would be the case. Stalin and his henchmen aggressively took control of all aspects of life in the occupied nations, shutting down all independent agencies, governments, newspapers, etc., throughout the region. Within a decade, all pretense of freedom was gone for millions of citizens. Pulitzer Prizer winner Applebaum (director of political studies, Legatum Inst., London; Gulag: A History) has applied her immense knowledge-and impressive language skills-to a thorough investigation of how the Soviets under Stalin and his successors systematically established nearly totalitarian control of Eastern Europe and, in so doing, laid waste to cultures and societies that had been built over centuries. Verdict This is a powerful and sobering book, by far the best treatment to yet appear on the topic. There have been earlier studies treating individual nations (e.g., Laszlo Borhi's Hungary in the Cold War, 1945-1956, and Andrzej Paczkowski's The Spring Will Be Ours: Poland and the Poles from Occupation to Freedom, translated from Polish by Jane Cave), but no one has accomplished the synthesis of multiarchival sources that Applebaum presents here. An important and essential study of a neglected aspect of the Cold War era. [This book has been nominated for the 2012 National Book Award in nonfiction.-Ed.]-Ed Goedeken, Iowa State Univ. Lib., Ames (c) Copyright 2012. Library Journals LLC, a wholly owned subsidiary of Media Source, Inc. No redistribution permitted.

According to this disturbing but fascinating history, the U.S.S.R.'s 1944-1950 subjugation of Eastern Europe was a brutal process. With other priorities in the forefront at Yalta and other wartime Allied summits, FDR gave Soviet occupation of Eastern Europe short shrift, according to Pulitzer Prize-winning author Applebaum (Gulag). In this account of the Soviet takeover of Eastern Europe during and after WWII, Applebaum concentrates on events in Poland, Hungary, and what became East Germany, all of which unroll with depressing sameness. The Soviet army arrived in 1944-1945 with enormous destruction. There followed an orgy of arrests, trials, executions, and deportation of "fascists," a broad category that included noncommunist anti-Nazi resistance groups. Expulsions of ethnic Germans was also carried out on a mass scale. Faithful Marxists, the Soviet leaders knew that the masses would prefer communism, so they initially allowed political parties, churches, newspapers, and even elections, assuming the people would naturally vote for a proletarian state. When that didn't happen, democracy was quickly shut down. Applebaum delivers a gripping if unremittingly painful account of the period during which Communists, astonished at losing every election, steadily suppressed civil society, whereupon darkness descended for 40 years. With precision in her narration and penetrating analysis, Applebaum has written another masterful account of the brutality of Soviet rule. Illus., maps. Agent: Georges Borchardt, Georges Borchardt Inc. (Nov.) (c) Copyright PWxyz, LLC. All rights reserved.

Focusing mainly on Poland, East Germany, and Hungary, journalist and Pulitzer Prize-winning author Applebaum details the transition to communism in Eastern Europe in the early post-WWII years. Her in-depth, captivating study illustrates how the Soviet government managed this transformation by destroying civil society and building new state-controlled institutions. Soviet administrators used local collaborators, international communists trained in the USSR, the Red Army, and the Soviet and local secret police to enact deportations, ethnic cleansing, terror, purges, and mass fear to ensure the restructuring of East European societies, cultures, and economies. Picking up where Timothy Snyder left off in his Bloodlands: Europe between Hitler and Stalin (2010), which focuses on the war years, Applebaum's description of the violence and tragedy that befell this region in the early postwar period is similarly haunting and distressing. In the book's last chapters, Applebaum explains how communism in Eastern Europe endured through her discussion of the ways in which many people reluctantly accepted it, passively resisted it, but ultimately allowed it to continue. This thought-provoking, well-written work will be appreciated by a wide audience. Summing Up: Highly recommended. All levels/libraries. M. Chakars Saint Joseph's University

Applebaum's Gulag received a 2004 Pulitzer Prize, an accolade that accords prominence on her new, groundbreaking investigation of the history of communism. Examining Stalin's imposition of totalitarian regimes on Poland, Hungary, and the Soviet zone of Germany, Applebaum depicts Communist parties that were remorselessly successful in destroying opposition but that failed to win widespread popular support. An interesting motif in Applebaum's history is the awareness by Communist leaders of civil society's rejection of Stalinist socialism, demonstrated by the communists' losses in somewhat unfettered postwar elections. After redressing that problem with rigged polls and mini gulags, the regimes strove to improve communist ideology's attractiveness through propaganda, mass demonstrations, socialist realism in art, and model communist cities. Some people became convinced supporters, but most did not and survived through personal compromises with communism. The latter's individual stories, drawn from interviews and research into those suppressed by state security, infuse Applebaum's account with perplexing human interest. What made for a collaborator, a true believer, a dissident? A masterful chronicle and analysis, Applebaum's work is a history-shelf necessity.--Taylor, Gilbert Copyright 2010 Booklist

A Pulitzer Prizewinning author returns with the story of those dark decades in Eastern Europe when the Soviet Union slammed the prison doors on people, cultures and countries. Realizing she could not tell the whole story in one volume, Washington Post and Slate columnist Applebaum (Gulag: A History, 2003, etc.) focuses on Poland, East Germany and Hungary and shows how their stories were representative. She begins as World War II was ending. The Russians were plowing through Eastern Europe on their way to Berlin. While many of the Allies were thinking of home, the Soviets had grander and grimmer ideas. Applebaum shows how the communists gained political control of individual countries (they were sometimes surprised in "elections" how unpopular they were), then charts how--in the service of their iron ideology--they systematically destroyed economies, organizations, the arts, education, the press, the judiciary, the church, the entertainment industries and every other social institution. Internment camps and prisons became the true growth industries. Applebaum also explores the tactics employed to keep people in line: fear and intimidation, of course, but also a massive propaganda industry that sought to convince everyone that things were better than they were, but not nearly as good as they would be in five years or so. They invested much hope in education, believing they could indoctrinate an entire generation. It didn't work. Periodically, the author chronicles what was happening in the West (the Marshall Plan, the Berlin Airlift). Beginning with the death of Stalin, Applebaum shows how and why things slowly began to change. The emerging youth culture, the resurgence of religious belief, the rise of a new generation of writers and artists--these were among the factors that energized the 1956 uprisings, which, of course, the Soviets temporarily crushed. A dark but hopeful chronicle that shows how even humanity's worst can fracture and fall.]] Copyright Kirkus Reviews, used with permission.
More book reviews at iDreamBooks.com