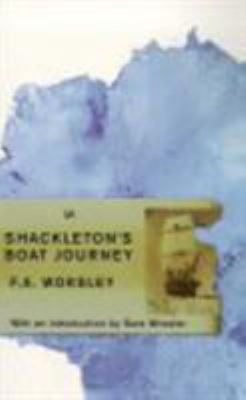 Frank A. Worsley was the Captain of the H. M. S. Endurance , the ship used by the legendary explorer Sir Ernest Shackleton in his 1914-16 expedition to the Antarctic. On its way to the Antarctic continent the Endurance became trapped and then crushed by ice, and the ship's party of twenty-eight drifted in an ice floe for five months. Finally reaching an uninhabited island, Shackleton, Worsley and four others sailed eight hundred miles in a small boat to the island of South Georgia, an astounding feat of navigation and courage. All hands survived this ill-fated expedition; as Worsley writes, 'By self-sacrifice and throwing his own life into the balance, (Shackleton) saved every one of his men...although at times it looked unlikely that one could be saved.'

In 1914 when Sir Ernest Shackleton was conducting his fourth Antarctic expedition, his ship, the Endurance, was caught and crushed in pack ice, his crew marooned on Elephant Island. Worsley was his navigator and along with four others on a small sloop he accompanied the explorer on a harrowing journey to the nearest manned station some 800 miles away. His account of that voyage and overland trek--also detailed in Shackleton's out-of-print South (1919)--is a glowing tribute to the commander and an itemized record of perseverance. For days they endured furious weather and countless dangers: circling killer whales, frostbite, riptides, thirst. Taking their position was a grim operation--the sun came out just twice a week--and when they reached South Georgia they still had to cross mountains and glaciers. Finally they approach a Norwegian whaling station and Worsley, after three months with no bath and seven months in the same clothes, stops to spruce up in case there are ladies inside. Even writing seven years after the trip (when this was published in Britain), Worsley is a keen reporter: he lingers on the import of frozen Burberry socks or piping hot hoosh, marvels at the tenacity of his fellow travelers and the particular courage of Sir Ernest, and takes pride in the ultimate rescue of the entire crew. Copyright ©Kirkus Reviews, used with permission.
More book reviews at iDreamBooks.com