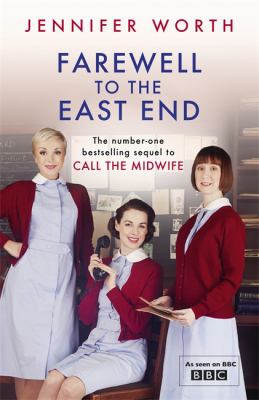 Farewell to the East End / Jennifer Worth.

The third and final book in the bestselling CALL THE MIDWIFE trilogy, now a major BBC TV series starring Miranda Hart and Jessica Raine. The hit BBC TV series CALL THE MIDWIFE is based on the memoirs of Jennifer Worth, chronicling her life as a midwife in London in the 1950s. FAREWELL TO THE EAST END is the third book in the trilogy. Following on from the bestselling CALL THE MIDWIFE and SHADOWS OF THE WORKHOUSE, Jennifer brings her story to a conclusion. Post-war life could be a struggle - the devastating effects of TB, dangerous backstreet abortions, people driven to extremes by poverty - but there was also warmth and humour. Like Megan'mave, the identical twins who share the same browbeaten husband; the eccentric Sister Monica Joan; and gauche debutante Chummy, who wants to be a missionary. FAREWELL TO THE EAST END shines a light on the lives, culture and stories of a bygone era, and is both moving and heartwarming in equal measure.

Jennifer Worth trained as a nurse at the Royal Berkshire Hospital, Reading, and was later ward sister at the Elizabeth Garrett Anderson Hospital in London, then the Marie Curie Hospital, also in London. Music had always been her passion, and in 1973 she left nursing in order to study music intensively, teaching piano and singing for about 25 years. Jennifer died in May 2011 after a short illness, leaving her husband Philip, two daughters and three grandchildren. Her books have all been bestsellers.