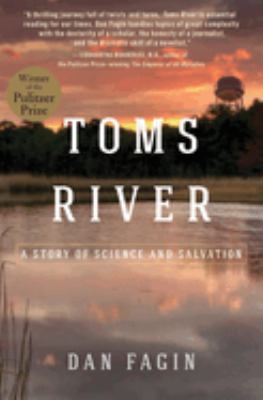 Toms River : a story of science and salvation / Dan Fagin.

The riveting true story of a small town ravaged by industrial pollution, Toms River melds hard-hitting investigative reporting, a fascinating scientific detective story, and an unforgettable cast of characters into a sweeping narrative in the tradition of A Civil Action, The Emperor of All Maladies, and The Immortal Life of Henrietta Lacks .

One of New Jersey's seemingly innumerable quiet seaside towns, Toms River became the unlikely setting for a decades-long drama that culminated in 2001 with one of the largest legal settlements in the annals of toxic dumping. A town that would rather have been known for its Little League World Series champions ended up making history for an entirely different reason- a notorious cluster of childhood cancers scientifically linked to local air and water pollution. For years, large chemical companies had been using Toms River as their private dumping ground, burying tens of thousands of leaky drums in open pits and discharging billions of gallons of acid-laced wastewater into the town's namesake river.

In an astonishing feat of investigative reporting, prize-winning journalist Dan Fagin recounts the sixty-year saga of rampant pollution and inadequate oversight that made Toms River a cautionary example for fast-growing industrial towns from South Jersey to South China. He tells the stories of the pioneering scientists and physicians who first identified pollutants as a cause of cancer, and brings to life the everyday heroes in Toms River who struggled for justice- a young boy whose cherubic smile belied the fast-growing tumors that had decimated his body from birth; a nurse who fought to bring the alarming incidence of childhood cancers to the attention of authorities who didn't want to listen; and a mother whose love for her stricken child transformed her into a tenacious advocate for change.

A gripping human drama rooted in a centuries-old scientific quest, Toms River is a tale of dumpers at midnight and deceptions in broad daylight, of corporate avarice and government neglect, and of a few brave individuals who refused to keep silent until the truth was exposed.

Recounts the decades-long saga of the New Jersey seaside town plagued by childhood cancers caused by air and water pollution due to the indiscriminate dumping of toxic chemicals.

Toms River, NJ, is a small town near the Jersey shore that grew up around chemical industries and the wartime technology boom of World War II. Fagan (journalism, New York Univ.) explores the history of Toms River, and the effects on the town of its proximity to the local chemical plant. While he details the history of the town from its founding in the 1800s to now, his account is often muddled by tangential histories, such as a detailed description of the discovery of the vat dyeing process. In particular, Fagin focuses on the extremely high occurrence of childhood cancer in Toms River, which has been linked to the area's air and water pollution. While each piece of the history may be interesting and informative, as a whole, the book does not flow. VERDICT Readers may be bogged down by the minutia of this book, but its detailed text will appeal to in-depth researchers, especially those with a personal connection to the region or familiar with the chemistry detailed herein.-Dawn Lowe-Wincentsen, Oregon Inst. of Technology, Portland (c) Copyright 2013. Library Journals LLC, a wholly owned subsidiary of Media Source, Inc. No redistribution permitted.

Most people know Toms River, N.J., as one of the areas devastated by Superstorm Sandy. But Fagin, an associate professor of journalism and the director of the Science, Health and Environmental Reporting Program at New York University, reveals an earlier, less conspicuous disaster in the region. In a well-documented expose of toxic industrial plants, corporate greed, and government neglect, Fagin (Toxic Deception, coauthor) plays detective to reveal the excessive human cost of chemical manufacturing hubs in the Jersey pinelands. Fagin focuses his research on cancer hot spots and how they affect the development of local children, but he also delves deeper into the region's tragic history by tracing the arrival of chemical plants in the early 1950s and chronicling the massive contamination of waterways, soil, and air that followed shortly thereafter. Determined to reclaim their health and lives, the residents waged a long legal campaign, which resulted in a pioneering government study, the revelation of an extensive cancer zone, and a settlement of over $35 million. A crisp, hard-nosed probe into corporate arrogance and the power of public resistance makes this environmental caper essential reading. Map. Agent: Jane Dystel, Dystel & Goderich Literary Management. (Mar.) (c) Copyright PWxyz, LLC. All rights reserved.

What was in the water in Toms River? A seemingly high number of childhood cancer cases in the New Jersey town prompted the question, but there turned out to be no easy answer. As Rebecca Skloot's The Immortal Life of Henrietta Lacks (2010) investigated the tragic impact that unethical scientific pursuits had on a family, Toms River unravels the careless environmental practices that damaged a community. The book goes beyond the Toms River phenomenon itself to examine the many factors that came together in that one spot, from the birth of the synthetic chemical industry to the evolution of epidemiology to the physicians who invented occupational medicine. Former Newsday environmental journalist Fagin's work may not be quite as riveting in its particulars as Skloot's book, but it features jaw-dropping accounts of senseless waste-disposal practices set against the inspiring saga of the families who stood up to the enormous Toms River chemical plant. The fate of the town, we learn, revolves around the science that cost its residents so much.--Thoreson, Bridget Copyright 2010 Booklist

An award-winning science journalist exposes how corporate interests and corrupt politicians almost turned a quiet, suburban New Jersey beach community into a toxic wasteland. Former Newsday reporter Fagin (Journalism/New York Univ.; co-author: Toxic Deception: How the Chemical Industry Manipulates Science, Bends the Law and Endangers Your Health, 1999) reveals the complex motives that blinded residents of Toms River to the consequences of the practices of the town's major employer, Ciba-Geigy, a chemical company based in Switzerland that produced dyes from coal tar. Since the early 1950s, the corporation "had produced about three billion pounds of dyes and plastics--along with perhaps forty billion gallons of wastewater and two hundred thousand drums of toxic waste," which ultimately found its way into their drinking water. In 1986, after mounting pressure from environmentalists resulted in some remediation, Ciba-Geigy announced the plant's imminent closure. They would be moving their operations to lower-wage areas with less regulation (in the U.S. and overseas to Asia). Despite increased environmental awareness over the years, the union (supported by residents who feared the loss of the high wages paid by the corporation) was complicit in a coverup of the extent of the contamination. While some people relied on backyard wells, the major drinking-water supplier in the town also had a vested interest in the coverup, and tourism was an economic consideration. Eventually, truth prevailed as parents became concerned by the number of children afflicted with cancer, and activists were supported by the local newspaper. A 2001 legal settlement was "one of the largest payouts ever, in a toxic-exposure case." Fagin weaves fascinating background material on epidemiology, statistical analysis and more into this hard-hitting chronicle. A gripping environmental thriller.]] Copyright Kirkus Reviews, used with permission.
More book reviews at iDreamBooks.com