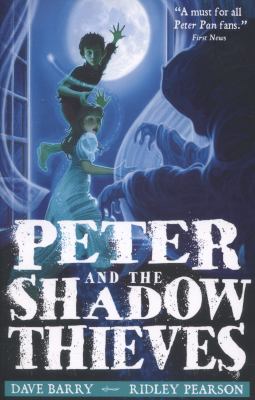 Discover more about the origins of J. M. Barrie's beloved Peter Pan in this New York Times number one bestseller, a thrilling sequel to Peter and the Starcatchers.A ship draws near Mollusk Island, bringing an eerie passenger - a cloaked stranger who makes even the desperate pirate crew shake in fear. Lord Ombra is coming for Peter and the Lost Boys... Peter and Tinker Bell must travel to the mean streets of Victorian London on a mission to save the world from the forces of darkness - but can they survive the sinister Shadow Thieves? A must for Peter Pan fans - young or old - this action-packed magical adventure reveals even more of the boy-who-never-grew-up's past!

A ship draws near Never Land, bringing an eerie passenger - a cloaked stranger who makes even the menacing pirate crew tremble with fear. Lord Ombra is coming for Peter and the Lost Boys.

The stellar Jim Dale helps ageless boy Peter Pan and his beloved Tinker Bell turn up the action-adventure meter a notch in Peter and the Shadow Thieves by Dave Barry and Ridley Pearson, a follow-up to Peter and the Starcatchers. Peter and Tink travel to the streets of London to help a dear friend, and face-off against a seafaring villain named Lord Ombra to good effect, via Dale's rousing rendition of the tale, and his always colorful and distinctive character voices. (July). (c) Copyright PWxyz, LLC. All rights reserved

Gr 4-7-In this sequel to Peter and the Starcatchers (Hyperion, 2004), trouble arrives at Mollusk Island (otherwise known as Never Land) in the form of a ship filled with nefarious characters searching for the trunk of "starstuff" that the Starcatchers spirited away in the first book. When the bad guys, led by nonhuman Lord Ombra, learn that it is in London, they sail off in pursuit, and it takes the combined efforts of Peter, Tinker Bell, and Peter's friend Molly's Starcatcher family to ensure that it is returned to outer space before Lord Ombra can use it to rule the world. Kids won't have to have read the first book to dive headfirst into this one; it is filled with enough rollicking, death-defying adventure to satisfy anyone. Readers familiar with James Barrie's Peter Pan (or even the Disney animated version) will immediately recognize and enjoy familiar characters, but it is when the action switches to London that the plot really starts to sizzle. Breathless chases and near-death experiences are spiced with a miasma of Dickensian squalor, creating scenes that are rich in color and action if short on in-depth characterization. This should appeal to fantasy and adventure fans alike.-Eva Mitnick, Los Angeles Public Library (c) Copyright 2010. Library Journals LLC, a wholly owned subsidiary of Media Source, Inc. No redistribution permitted.

Gr. 5-8. In this second prequel to the adventures made familiar by J. M. Barrie and Walt Disney, which builds on the events of Peter and the Starcatchers (2005), two veteran writers for adults do not disappoint. Sustaining the first book's lively pace are short chapters packed with action and well-chosen details--both icky (Peter and the bucket of excrement!) and marvelous (the pitch-perfect sound of Tink's exasperation). An evil force is once again trying to obtain starstuff, the magical substance that, among many other qualities, enables Peter to fly and to remain eternally youthful. Peter must visit London to help his friend Molly and her family of starcatchers, leaving the boys on Mollusk Island at the mercy of Hook. Squalid London streets, aristocratic mansions (one of which houses a young George Darling), and even Stonehenge make atmospheric backdrops for bouts with pirates, wolf packs, and a deliciously creepy villain who steals souls from shadows. Readers will relish the chance to further explore the backstory of a favorite childhood tale, and hope for a third installment. --GraceAnne DeCandido Copyright 2006 Booklist

Peter and Tinker Bell (Peter and the Starcatchers) journey from Mollusk Island to London to warn Starcatcher Molly about the evil Others. Peter, Tink, and Molly must stop the Others, who are intent on obtaining magical starstuff from Molly's father. A surfeit of plot lines and villains (including Captain Hook, back on the island) slows down and confuses the adventure. (c) Copyright 2010. The Horn Book, Inc., a wholly owned subsidiary of Media Source, Inc. No redistribution permitted. All rights reserved.

The co-authors of Peter and the Starcatchers (2004) go to the same well, and that would be one trip too many. When the evil Others come back with a powerful new ally to recover the trove of supernal Starstuff rescued in the first episode, Peter reluctantly leaves Mollusk Island ("Never Land") to deliver a warning to Molly (Wendy's mother-to-be) and the other Starcatchers. Despite introducing a chilling, Dementor-like bad guy in the person (or whatever) of soul-seizing Lord Ombra, and pacing cranked up by dozens of quick point-of-view cuts, so dependent is the plot on repetitive set pieces--how many times will Ombra ooze into another clueless victim's shadow? Or Tinkerbelle use her flashbulb trick to daze some attacker?--that the melodrama soon takes on a labored cast. Overstuffed with narrowly typecast characters and featuring a bulky side plot shoehorned in apparently just to keep Captain Hook and the Lost Boys in sight while the other players are off in London, this formulaic sequel shows two writers for adults who are just going through the motions. (Fantasy. 11-13) Copyright ©Kirkus Reviews, used with permission.
More book reviews at iDreamBooks.com